~Long term weather projections have been consistently bad,  no better than flipping a coin as
some suggest.

~EH2r refraction methods likely will surpass supercomputers,  with only data from mainly one station at a very strategic location  vs hundreds of the world wide grid  for the machines. 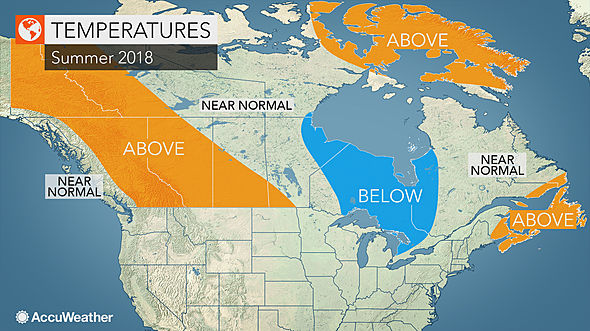 According to 24 days ago EH2r projection,  which has been to date  quite accurate, t he only time the West with  above normal summer temperatures would be end of summer,
Central Canada should be equal  slightly below to normal, at beginning and very end of summer,   Eastern Canada above normal till summer end.   Baffin Island is way off,  must be colder to seasonal throughout.

Weather Channel does something smart ,  it splits the summer into 3 months.  However,  there does not seem to be any coherence with EH2r outlook: 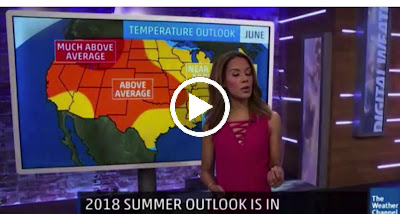 May 18 projection seems to be made from the same super computer run,  West of a vortex should have influx from the North,  unless the North warms incredibly,  it should be cooler there from beginning of summer till end of July.

NOAA  looks pretty good at equal to average temperatures in the Midwest despite not projecting for each month,  the deep Southwest US above normal seems reasonable given the lack of circulation from the greater distance to the Cold Temperature North Pole.  Eastern North America would be an "A" would it be not for end of summer cloudiness cooling.

ECMWF  based May 1,  June-July-August-September 2018...  June is the one with the most probability below normal temperatures at 60 to 70 % in deep blue.  The particular fixation with Western North America being probably warmer is illogical,  the flow suggested by ECMWF  West of the CAA (Canadian Arctic Archipelago) infers a flow from the North
throughout all 4 months.  Advection from the South should boost a warming (Eastern North America).  The UK becoming progressively warmer than normal as summer progresses looks good.  Barents sea area warmer mid summer onwards seems correct,  equally Alaska above average temperatures throughout makes sense.  Although seems that ECMWF model is calling for El-Nino to reappear as well.

ECMWF looks good in many regions despite the same common flaw,  all models except NOAA seem to rely heavily on the same  western North America warming.  We shall see if this holds true.  WD May 20, 2018