North of Alaska new rapid melting area 120,000 Km^2 appears sudden,  but is more something to do with water and sea ice temperature.   Note buoy 2014C likely floating about in the wider open zone to the West , is reporting -1 C water,  likely enough to help further the thawing process.    What appeared more solid a mere 6 days earlier almost disappears overnight.  Despite -2 C weather,  which is permeated by a Low pressure system.  Sea ice appears most fragile when  the ice temperature is equal to surface water,  particularly at this time of the year.  The total accumulated heat by open water won't go rapidly,  only very cold surface air temperatures will stop this process.  WD August28,2014
Posted by EH2R at 6:17 PM No comments: 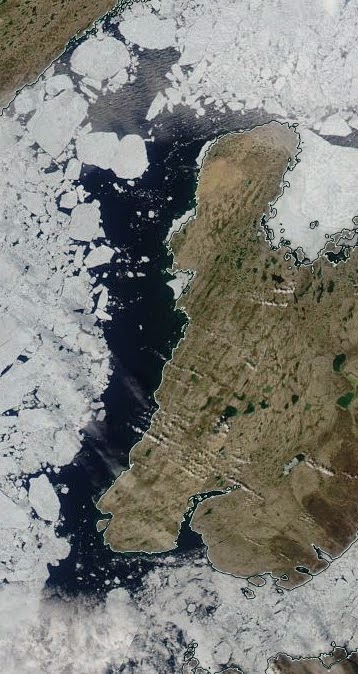 7 day ice melt, as fast as it goes, but late in the season

Despite clouds NOAA Visible wavelength sat pictures clearly depict rapid melt and clockwise rotation of North Beaufort Sea Ice.   The wider open clear water near Banks Island is August 16 (compared to August 9 1 week earlier),  there is no ice to draw from this Island, therefore the ocean appears really clear,  the rest of the August 16 picture is veiled by clouds.  The big 160,000 Km^2 North of Barrow circular melt  has lost most of its broken internal ice,  may be not enough to register on the CT Area data, clouds don't help showing that it expanded as well. WD August 16,2014
Posted by EH2R at 7:36 PM No comments:

Rapid disintegration rate may not be measured accurately because there is more than 15% of sea ice left.

There is lateral displacement of sea ice every where as seen here for NOAA visible pictures between August 9, 2014 (mostly clear) and August 11, 2014  (large clouds with shadow top right).  What is seen is a new large area of open water about 160,000 Km^2 (on the 9th) just North of Barrow Alaska,   expanding rapidly wherever there is ice,  but it easily has some remnants in extent more than 15% which will not let this expanse be measured in area until there is > than 76% of open water.  This leaves measurement metrics a bit off, and particularly strange, when we can see great melting but no daily records of it can be noted.  Eventually when there will be less than 14% of ice left in open water zones the drop in extent and area will show rather large on daily data records as seen on JAXA or  Cryosphere Today.  But the area to the South of Expanse has roughly 50% water, all of this is considered as 100% ice. WD August 11,2014

August 6 NOAA image (with clouds lower left) compared to August 11 PM NOAA demonstrates rapid melting in progress at every ice edge.  But envelopment must occur first.  The main process of compaction is 2 pronged,  first the main pack is pushed together,  then the ice shore scatters with thicker ice moving inwards faster,  leaving thinner ice behind (by winds).  The thinner ice gets enveloped by warmer sea water when exposed to sunlight.  The ice, known by buoy data, is at the same temperature
as the sea surface,  any warming obliterates it to water.   A second melting process,  quite interesting by its look,  may be a precursor to a complete melting of larger chunks of sea ice.  A melting occurs in the middle of a pack,  likely because there was thinner ice laced with leads there.   Thawing spreads outwards by sunlight warming sea water ever more so taking hold of the region.    Compaction moves the ice as a whole,  warmer water reaches the scattered ice and envelopment is amplified.    Again the rate of melting is extremely fast,  considering the ice appeared to have withstood the onslaught of summer hardly unscathed,  but it is not so, sea ice was transformed, from hard and cold to as warm as sea water and soft,  ripe for elimination.   In 2007 this process occurred earlier with a combination of warmer weather and total insolation which devastated the thickest pack ice very quickly.  But same process,  even with lower cooler sun, it happens just as much.  WdAugust11,2014

Clouds forgiving us a sight, NOAA August 6 to 12 visible picture again brings out a clear break down
of shore ice vanishing as quick as I have ever seen it,  thanks to buoy data, we know why,  again data remote sensing numbers don't suggest,  not even a mere hint of this action.  So the proper interpretation
of ice status is not 2 dimensional but 4, consisting of area,  thickness and  temperature.   A glance of larger ice extent does not tell the whole picture. For instance,  the ability of sea ice to change the weather depends on its temperature,  not acting as a heat sink affects Global Circulations which in turn affect the pack same as any meteorological feedback mechanism.  wd August 12, 2014

~Must be aware that overall records need a closer look

August 5-6-7 2014 NASA EOSDIS  Lower left cloud is 5,  clear air is 6 and Upper left cloud is 7.  Of the East Siberian Sea area.  The main pack is retreating steadily due to high pressure circulation,  but it leaves readily melting residual sea ice in its wake likely affecting the overall result when using area or extent 15% threshold as done by JAXA or Cryosphere Today. Instead of approximately 15K km^2 retreat,  the numbers from the 15% threshold method apparently would show much smaller result.  The current favourable for compaction  action in the East Siberian sea sector also is part of a larger stronger Arctic Basin Gyre movement which makes the other side of the Pole pack expand Eastwards in the warm North Atlantic,  giving the impression that there is no movement or action in that quadrant.   The over all result makes Sea ice extent and Area numbers look quite small. While there is indeed serious movement and melting going about.  WD August 7, 2014