Prelude to the Late Great Arctic Ocean summer sea ice, the writing is in the air

~There is a minimal,  but valuable,  effort to measure Arctic sea ice in its 3d nature

~It is about to vanish in summer,  this is one way to  know it: 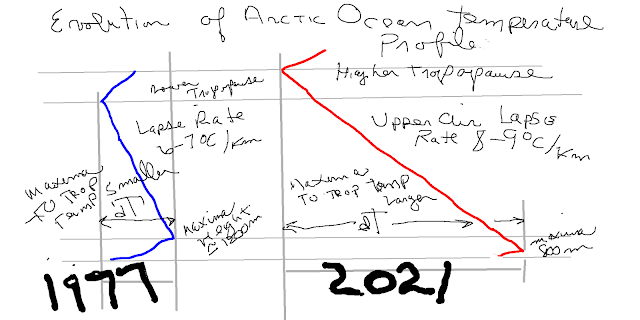 October November Canadian Arctic Archipelago Upper air profiles have evolved.  They are more like Southern Canadian ones.  The main reason is the disappearance of sea ice,  mainly now in its thickness.  This allows heat from the even warmer ocean to transform the lower troposphere.  In effect cancelling the build up of winter to a lesser degree of magnitude.  The difference between tropopause temperature and tropospheric maxima has grown,  the tropopause is usually much higher,  the inversion heights from surface have dropped.  But in particular temperature profile maxima to surface lapse rate has shrunken significantly since 2019, indicating a massive warming, therefore thinning of sea ice,  no longer thick enough similar in nature to deep frozen land.   It would take a much larger intense study to confirm how wide scale this phenomena is,  it would take a huge recalculation of historical measurements particular data points from all stations, not readily available on internet, in order to pinpoint exactly when the Arctic summer sea ice will completely melt.  Assessing atmospheric measurements far more rich in data, would make it easier to predict,  the keen  Arctic Atmosphere mirroring current Arctic sea ice state, is a work around way to measure over all sea ice thickness,  but seems it wont be long before it will all gone.  When the High Arctic Upper Air becomes close to resemble the subArctic of the 80's (its warming there as well) , ie Hudson Bay for instance,  we will have a better idea.  WD November 21 2021

~Never recorded as such ,  incredible High Arctic warming goes irresponsibly unreported,  although its climate effects will surely be talked about.

IGNORE Greenland,  925 mb air temperature does not exist inside a massive 600 mb high Glacier.   Look at the blue 262 Kelvin  (-21 C) reading especially over the Canadian Arctic Archipelago,  October 2021 gone, despite 2016 ultra warm El-Nino and the much thinner sea ice since 2012,   This will surely make an impression over North American weather further South.  Not that it wont cool,  but the colder sting of dark winter will start very late, if noticed at all. 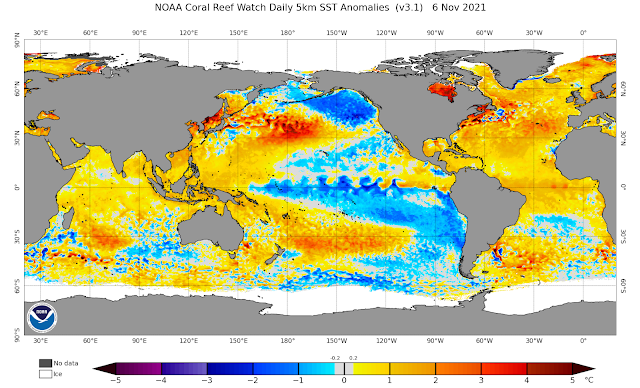