~Weakens winter were it should be strongest
~Creates smaller atmospheric mesoscale regions susceptible to migrate along the real polar vortex waves.

Again not an Arctic blast affected some parts down South,  because the temperature anomaly chart makes the Arctic +5 to +20 C above normal:
While in Atlanta 2" of snow turned to ice paralyzed the great Southern city,
historically not a frequent event. There seems to be a disconnect between a warmer Arctic and regionally small extreme cold weather.  The concept most TV weather spoke persons never talk about is the concept of isolated coldest atmospheres affecting regions not accustomed.  There are 2 at present,  one in Siberia, the other over North Eastern North America, both have weaker winds at 250 mb Center.

The jet stream usually sits next to where the coldest atmosphere exists, if the size of the coldest air extent diminishes the jet bends more and is less expanded towards the equator.    CTNP's in black rotate counterclockwise.

The bigger Cold temperature North Pole cell is over Siberia, which injects cold air west of the Urals.    The  North American Cell is way smaller and will not last.
It gradually diminished over quite some time,  being well South of its usual location demolished its strength and area, unfortunately to the detriment of people not use to snow.  The North Pole,  still in darkness  is quite warm despite the presence of a high pressure immediately next to it.  The dual CTNP nature will evolve further, likely being prominent in Russia, not so over North America.  Along with this change comes the different weather and essentially warmer temperatures.  WDJan30, 2014
Posted by EH2R at 11:46 PM 1 comment:

Looking back,  at December 1981 when the Arctic Ocean sea ice was much thicker,  we can see the outline of this vastly thicker sea ice with Outgoing Long wave Radiation (left):

NOAA recalculation to the right shows the outline of older multiyear ice for December 2013.   Here is proof in the effects of sea ice thickness on climate.  In December1981 there was far less radiation escaping to space compared to 2013.  Roughly 20 watts/m2.

This necessarily means thinner ice has an impact in profound ways,  the buildup of winter,  how big it becomes,  how long it lasts,  depends on how cold the Arctic and Sub-Arctic surface areas become.   A prolonged cold period permeating a huge area of the Earth defines the winter bitter, too long,  miserable.   From the onset of a greater sea ice melt at minima, the world wide dark season becomes automatically warmer, shorter, less expansive,  even with ideal conditions of thermal radiation cooling to space,  the thinner than multi-year new ice warms the atmosphere,  not only by thermal radiation from the sea,  but because of its fragile state,  creating more leads,  venting moisture and gases to the atmosphere throughout the winter, as opposed to a period called spring "break up", when vast amounts of organic and inorganic gases, naturally trapped under the ocean for many months,  gets unleashed with great amounts of water vapour,  at about Mid-April onwards,  when lower clouds and ice crystals overtook the sky.   This eruption from the sea protected sea ice further by reflecting resurgent sun rays to space.  For about a decade, this happened a lot less,  while during these last 10 years or so the process of all winter venting did the opposite,  it clouds the Arctic further during the dark season,  deflecting radiation usually heading to space back to the sea ice.  The OLR chart is worse than it seems,  a lot more  of thermal radiation returns to surface. Thus from darkness a warmer Arctic is seen on historic charts.


Translation in temperature terms
We have seen that thick ice has its own thermal imprint seen all the way to space,  it emits a lesser heat signature keeping the underlying sea cooler all year round.  A key feature of Polar biology is how not diverse it is, how encroachment from southern species reveal this fact.  At the core of this unique desert like feature is a steady predictable colder than not air temperature,  rarely having great variances aside from the impacts of large cyclone incursions.   A great change in temperature affects everything and everyone: 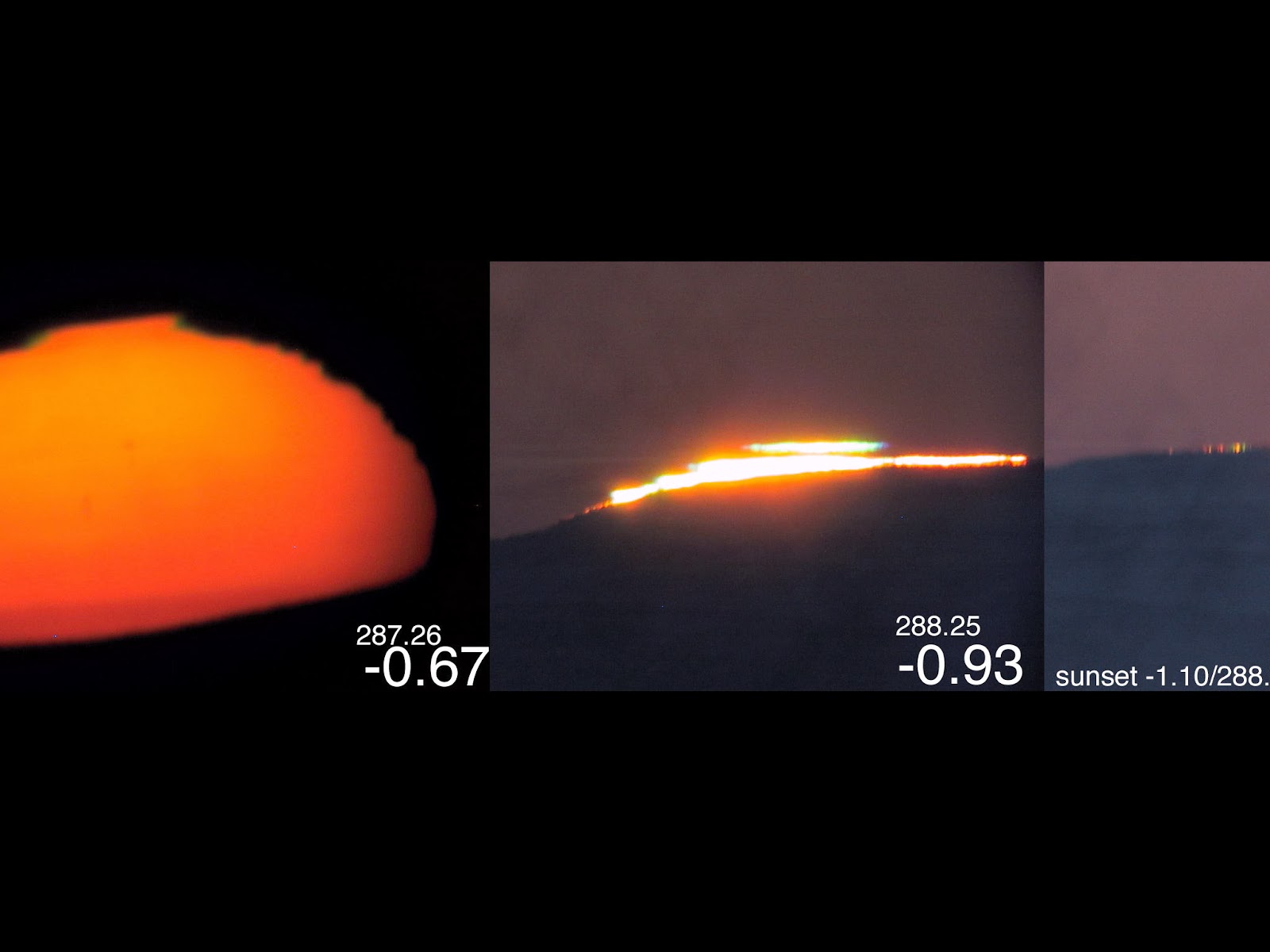 March 31 2004,  very cold ground triggered isothermal boundary layers are seen  breaking up the sun disk even to bend along with them diagonally.  The sunset on
top of the hill captured a magnificent green flash,  along with bent layering features.

Although distortions caused by by boundary layers still persist,  as this March 24 2012 demonstrates.  However, sunsets are gradually moving Southwards,  the sun is seen more rounder southern like earlier in the year,   the effect of thinner ice is also seen by the shifting horizon as well.  This awaits another presentation.

Warming off the ground changes the sunset,  the sun looks rounder, the layering vanishes.   Land and seas capable once of fostering great anticyclones transform to cyclone bearing zones.  April 28, 2013.

Isothermal layering on a grand scale fosters High pressure systems.  During Polar winters these systems cool the Earth a great deal.  If the Cyclogenesis system balance continues to change,  like during current reduction of disappearance of sea ice as of current days,  winter has no other way but to shrink in size, and be more wild and variable temperature wise because what is left of the cold air zone moves around with the rotation of the Earth.  WD January 11, 2013

"A polar vortex (also known as mignogno cyclones, polar vortices, Arctic cyclones, sub-polar cyclones, and the circumpolar whirl) is a persistent, large-scale cyclone located near one or both of a planet's geographical poles. "

Well  the North Pole is not in Minnesota USA.   Unless there was a huge geographical shift.

More correct is the following definition still from Wikipedia:

"The Arctic vortex has two centres, one near Baffin Island and the other over northeast Siberia.[2] In the southern hemisphere, it tends to be located near the edge of the Ross ice shelf near 160 west longitude.[3]When the polar vortex is strong, the Westerlies increase in strength"

So the current US weather is not a polar vortex,  but something rather more exotic,  more a propos to a lesser worldwide winter days when the jet stream gyrates weirder than usual,  it has more to do with the snow laden ground night sky being clear and the day time with fewer sun hours,  it is the Cold Temperature North Pole   (CTNP) .

Definition of CTNP:   Center of the coldest place on Earth.  It is usually one area emerging from a synergistic effect which is the culmination of the lost of heat to space,  it is not North or South Pole Centric.  But may have secondary,  isolated spots.  The circulation around a CTNP is counterclockwise.
By definition a Cyclone at center often without clouds.    Its location is calculated by the equivalent temperature of the entire temperature of the troposphere, or the Density Weighted Temperature.     In lack of actual DWT charts we must contend with 600 mb charts which often mathematically represent the temperature of the entire atmosphere,  since 600 mb charts are not often published,  either 500 or 700 mb charts may be used.   In this example

While the Wikipedia  cited Baffin Island "vortex "  is CTNP3   #3 coldest.        CTNP's further to the South do not last long,   disappear rather quickly.   While Arctic CTNP's last longest,  sometimes months.       But the reason why central North America is cold today was because a few days ago there was another CTNP over Southern Quebec,  which drew colder air southwards to its West.  Warmer air and cyclones were drawn in to its North .    The Southern Quebec CTNP warmed substantially and is well over Newfoundland on 6 January 2014.   WD 6 Jan 2014.