NOAA daily composites dedicated 238-245 Kelvin (-28 to -35 C ),  the left animation depicts latest years of great ice melts,  to the right  the pre great melt look.    What strikes as significant is the lesser cooling influence of the Arctic Ocean during the greater melt years.  The Vortex appeared always elongated or much warmer over this Ocean,  as opposed to 1980-85 having a mostly much colder Arctic Ocean atmosphere.  We note also very cold vortices above the continents occurring more prominently during the 2013-2018 years as opposed to vortices over East Siberian , North Greenland and Barents seas ,  now a days a very unlikely event given more extensive open water.      Deep cold vortices starting over land can be explained by the specific heat capacity characteristics of land varying a lot depending on snow coverage along with warm cyclonic intrusions circumnavigating vortices perimeters, being largely outside of them (more clouds covering the Polar oceans). .

Logically we would expect winters to start  earlier and colder during the 1980 to 1985 period.

In fact winters started colder more often, 4 times out of 5  on top of the Arctic Ocean during November 15 to December 7 1980-85 (left) ,  as opposed to starting mainly above the continents  5 out of 5 times during 2013-2018 (center).   I observed the latter frequently for a long time,  was often puzzled by this until making the simple connection,  the Arctic Ocean emitted more warmth during these latest years,  winters can only really start over land when sea ice is thinner along with the greater presence of warmed sea waters.  WD February 15 2019.
Posted by EH2R at 11:07 PM No comments: 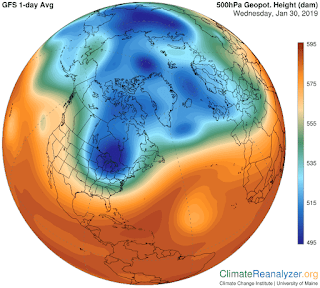 January 31 to February 8 JAXA  sea ice measurements reveal only 2018 being lesser in extent by about 16 thousand kilometers square on the 8th.  This is an extraordinary feature of winter 2019 with a distinctively dissimilar general circulation than the preceding 6 seasons.......

2019's general circulation to date can be characterized in part by by a snow footprint:

Snow cover has very similar features to sea ice extent,  it can define the degree of winter,
mild , severe or extreme.  If sea ice is widely spread out and thick,  Northern Hemisphere winter may be more  severe as well.  These two Cryospheric features make the story of winter which shapes the Arctic Polar Vortex:

NOAA daily composites 600 mb temperatures (close to the density weighted temperature of the entire troposphere),  Arctic Polar Vortex average location January
4 to February 4 2019.   Siberia dominates,  which is contrary to all winters going back to 2012.  There are some similarities from season to season, but very prominent differences were distinguishable by analyzing maps daily,  overall PV average extent calculations may appear somewhat similar,  but they are not:

The way to analyze any given Polar Vortex season,  is to break it down in smaller periods,  January 24 to February 4  sequences 2016 to 2019 demonstrate differing flow structures.  These are winters of interest having the least sea ice extent in history.  All 4 recent seasons including 2019  had different Arctic Polar Vortex configurations,; 2016 had a very mangled weaker  and smaller Polar Vortex,  with mainly 2 continental much weaker and smallish  vortices acting independently from each other. Arctic Ocean  sea ice  became badly broken up by minima 2016.   2017  had a Pole warming  flow pattern in particular with North of Greenland Atlantic in origin cyclones heading Northwards,  2018 had a massive extreme Polar vortice dwarfing all others above the Canadian Arctic Archipelago,  Russian side vortice appeared weaker on most occasions then.   2019 to date has the opposite of 2018,  but with a difference,  continental vortices within the Polar Vortex were more balanced with Siberia dominating on most days, so far  the Polar Vortex rarely split  in two and appears stretched out.  This gives open sea water inroads from the North Pacific,   a strong  Siberian vortice pushes massive cyclones Northeastwards more often,  To date, North Atlantic cyclones went towards Eurasia, and in effect help refreeze the North Pole area sea ice which keeps the Polar Vortex more or less together.

Given that 4 recent seasons created differing circulation features,  it is amazing that sea extent at Maximum extent date remains near all time record lows.  This strongly suggests a greater warming of the Oceans and sea ice has the potential to collapse to extreme low summer extents only not doing so because of,  you guessed it, summer circulation features. WD February 9th 2019 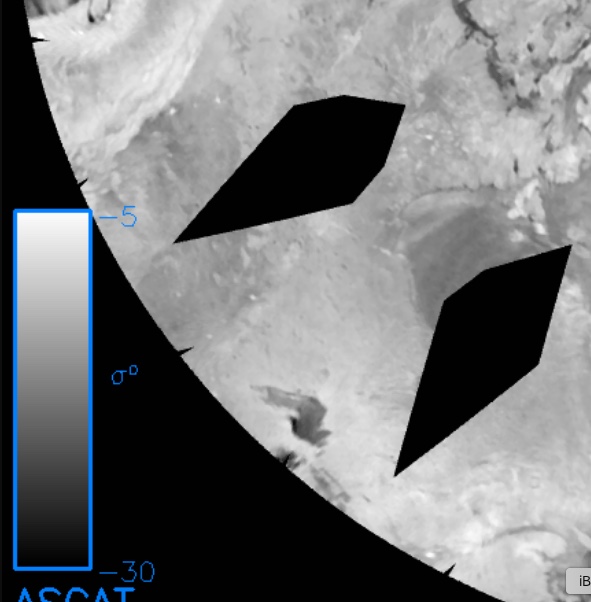