Winter circulation stall not giving cold from the Arctic, but blocking pattern in the Arctic

~Most fascinating CTNP  parks at the central US Canadian border

~Meanwhile,  it was substantially warmer in the Canadian High Arctic due to moderate Cyclone stall injecting a lot of warm air,  giving a weird scenario;  High Arctic  -20 C in clear blue skies for a week, 12 C warmer than seasonal.

From preceding EH2r article, Ellesmere Island reigned coldest spot in the world only for a few days,  then a strong Cyclone SE of Canadian Archipelago stalled, injected North Atlantic air quickly nullifying its deep freezing status.  This reorganized the centers of the now split Polar Vortex, one for each continent , of which the Canadian one's center reformed much further South,  it has been there since February 10.  Often the Canadian side Polar Vortex remained stable North of Hudson Bay,  recent winter history made this Polar Vortex create rogue vortices.  Not at present though.  If we look at this NOAA animation above,  we clearly see the Canadian PV become much colder at its center, not from Arctic origins,  but self made,  this is yet another frequent recent winters occurrence,  and so in tandem the rest of the US,  particularly Southern US deep froze without the Vortex being blamed,  from what weather broadcasters usually call "Arctic dome... Arctic blast" hovering above them.  600 mb is the pressure level which represents the temperature of the entire atmosphere the most.  It would be very accurate to posit the recent spate of record US cold weather to this circulation stall along with cold weather flow not moving fast: 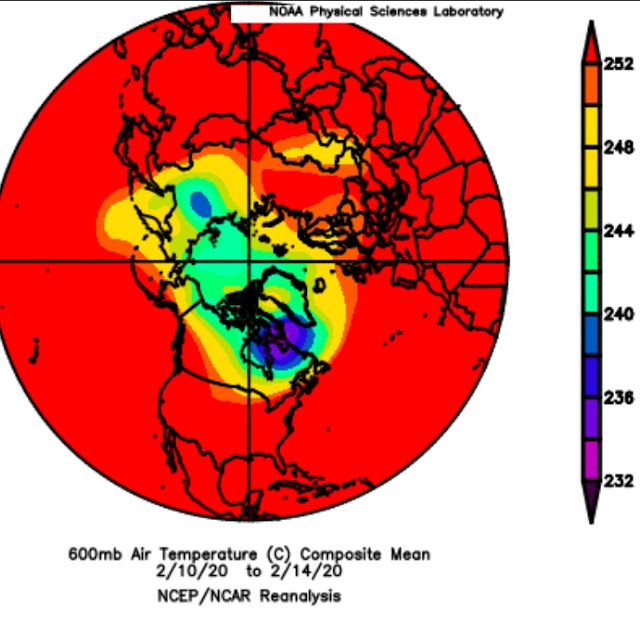 2020 same period, center of the single by-continental Polar Vortex was much further North,  favoring a warmer US,  especially NE US coast.  2021 extreme warming of the Arctic is in fact the Climate Change news that never gets heard of,  but this change plays havoc with traditional climate patterns, the smaller North American PV vortex of winter 2020-21 leads to rarely seen but now known results.  WD Feb 18, 2021
Posted by EH2R at 1:17 AM No comments:

~The North Pacific ocean quickly vanished it despite being huge

~But this was a sign of very important circumstances change on Continental scales.

Following the Niagara Rogue vortice came the Sakhalin Rogue on February 4,  massive and super cold (-38 at 700 mb),  it had no chance to last long thanks to the warmed North Pacific:

Sakhalin Island had a brief encounter with a rogue vortice,  just North of Hokkaido Island Japan,  the coldest air in the world lasted less than one day, the CTNP reappeared 5232 km in a mere few hours to Ellesmere Island .  This rogue was propelled towards an unforgiving Pacific blob of warmer sea surface temperatures.  The consequence neatly shows how important surface physical properties are with respect to the entire atmosphere immediately above.  Conversely,  we look at the rapid warming of Siberian air column as opposed to the Canadian Archipelago sudden deep cooling. As I am right under the Canadian cooling side,  I can attest 2 major converging factors making it so.  The top of snow temperature T*** has suddenly become much colder than surface air 2 meters above, explainable by the fact that permafrost active layer has finally cooled (to the equivalent point to places with far less snow cover which happened several weeks ago).  Secondly the atmosphere has dried further more, having shed away the last remnants of moisture coming from open sea water now covered by sea ice.    South Siberia had less snow cover than Ellesmere,  and the new wave of deep cold can be traced to that Island, its thick snow blanket insulation finally gave way to the normalization of temperatures only time can provide in total darkness.   The heat capacity of land is lesser than snow, so the rising South Siberian sun played a role in vanishing Siberias reign of winter coldest for current winter 2020-21.  WD February 7,  2021
Posted by EH2R at 8:43 PM No comments:

~Whilst dying in the Atlantic a new far colder rogue formed just North of Hokkaido Japan.

26 January 2021,  the Polar vortex was seen stretched and mangled by warmth on North American side, but -51 C surface weather strong in Siberia,  above with a  -35 C 700 mb CTNP (Cold Temperature North Pole of the entire Northern Hemisphere).  North Ellesmere and Greenland paled in coldness,  at 700 mb -28 C.  But well Southwards a rogue vortice was taking shape. Now centered in the middle of Ontario Manitoba border at -26 C (all temperatures from now will be at 700 mb).  Inujuaq Northern Quebec -12 C  makes  the rogue formation imminent.  The Northern Quebec region was too warm.  January 27,  the Southern Canada vortice of Polar Vortex vortices,   seemed to stall, inching Eastwards still at -26 C.  On the 28th Imujuaq  1200 UTC holds at -14 C.  Temperatures across Northern Ontario and Central Quebec plummet.  Day 29  Niagara Falls ROGUE ahoy!   Above the 7th wonder.   Now home of the  -26 C vortice while temperatures in Manitoba and  adjoining Ontario warmed substantially.  This vortice formed a neat break from the Polar Vortex.  Like a huge blob ,  the P.V.  gave birth to a  roundish baby vortex spanning from James Bay to Nova-Scotia , from Niagara to New Brunswick.  On the 30th,  Nothing,  nearly nothing seen left of it,  remnants almost vanished by colliding with North Atlantic Gulf stream Cyclone, as usual,   it is too warm for vortices to keep whole above warm ocean and Low pressure heat.  It wasn’t a long span survivor.  Meanwhile, the greater circumpolar Polar Vortex becomes a slick roundish zone  reforming 2000 miles Northwards,  reconsolidating,  struggling to spread further South.   While the Siberian CTNP started to warm a new far East Asian rogue forms. …….  WD Feb 3 2021