The pathway to perfection is laced with accurate evaluations


~ A surprise cooling temperature shift caused by too much snow on the ground, changed winter from all time cloudiest and warmest, to seasonal.

Quite similar to current 2018 prognosis,  winter 17-2018 gradually accumulated snow precipitation instead of coming on early like during previous year winter.  Just past Arctic winter was not uniform at all everywhere,  Bering sea region being warmest throughout  winter , just South of CAA being coldest,  with a wide region receiving a lot of snow  in particular the North Pole to Greenland sector,  most of the CAA and likely Barents and Greenland sea zones.

2017 melt season minima was 8th place out of 36  in a crowded field,  the next higher 4 rankings were slightly higher in extent.


There is no reason to believe that Tornados will be more frequent than average, there is a colder atmosphere than 2016 , but it is largely confined to the High Arctic Troposphere, its effect largely nullified in the warmer stratosphere without any greater high speed laminal wind formations as what made 2011 prediction successful. The Stratosphere is unusually normal, the very Cold at center -80 C Polar Stratospheric Vortex lasted a very short time, barely made a high speed spin around the Pole compared to other more prominent years. However heat contrasts will exist at the higher latitudes, perhaps displacing tornado alley Northwards. Hurricanes should be less frequent because the Sahara will be especially hot this year, its sand dust greatly affects Hurricane formations . Typhoons should be normal in numbers as with a Neutral ENSO season, since I have not seen nor detected any significant ENSO trend.

2018 conditions and circulation are dissimilar,  the Polar jet stream should be largely confined at much higher latitudes with mainly one dominant CTNP driving it:

600 mb air temperature closely represents the Density Weighted Temperature of the entire atmosphere,  it is of way better usage than often overused 500mb,  because 600 mb height is more at the center of the troposhere.    NOAA daily composites are often adequate,  sometimes way off,     such is the case for 600 mb to the West of Canadian Arctic Archipelago for 2018.  2002 March 25 to April 25 600 mb temperature map is more like what is going on during the same period in 2018.   However 2002 over all circulation is from another era,  when there was much thicker sea ice spanning a wider area of the Arctic year round,  2002 started just getting away from one of the coldest long lasting  La-Nina  in history,  almost 3 years.   2018 La-Nina from El-Nino 2016 rebound has been struggling , sputtering,  has been unstable ,  weak and predictable as irregular.  I have observed definite La-Nina tendencies similar to spring 2008 "Big Blue" eternal cloudy free spring, roughly 47 days long in late winter early spring 2018,  with an El-Nino like warm cloud boost over  all in 3 months just past.  So this summer will sputter at irregular occasions warm and cool,  dry and wet likewise world wide.  2002 was much more stable.  But this I agree with NOAA daily composites,  2018 has a smaller area of very cold air in the Arctic.  Smaller means the jet stream will be closer to the Arctic than tornado alley,  but I wont be surprised if tornados will strike and vanish in likewise ENSO mentioned cycles.

2011 was the marquee year for tornados,  it was foreseen as such ,   there are no real very close similarities with 2011,  300 mb Geopotential height has the lower tropopause oh the other side of the world,  while the amount of raw kinetic energy has been tame:

End of winter stratospheric Polar vortex varies in strength from year to year,  2018 had a smaller less expansive and shorter in duration one than 2011,  the latter had upper winds much in excess of 200 knots.  Laminal velocities as such don't disappear but dissipate throughout the Upper air,  the stronger the upper winds the more there should be tornados.

Typhoons  never seemed to have stopped in intensity during the last few years,  ENSO being Neutral again will continue the trend.  Hurricanes will of course occur again,  but I like the 2002 historical tracks as a good approximation model already experienced on Earth, 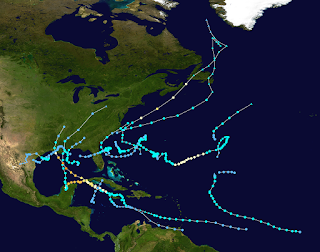 We must keep in mind the distant CTNP cell influencing circulation,  the grasp of this circulation extends beyond its sight.  But again 2002 circulation is not quite like 2018,  because of mainly one cold vortex left (maintained by Greenland)  minus the much warmer Atlantic sea water temperatures,  which would mean  more numerous fierce hurricanes (than 2002) arcing towards the NE,  but for those venturing  at Mexicos latitude,  further away from the CTNP center of gravity,   no real sense of direction, aimless meanderings.    The last CTNP, or what is left of it, will attract cyclones,  watch for a one two punch,  first a cyclone heading towards Greenland,  creating a path or rather an enclosure with a Greenland High stretching South, the following cyclone,  if hurricane,  will fall into the trap forcing its pathway almost straight North.


In all years since 2004, this was the easiest thing to do, since I simply transposed or calibrated Arctic Sun disk vertical disk gains statistics as a defacto Northern Hemisphere temperature average. It worked marvelously well. But now , excess snow on Arctic lands makes it more difficult.
The colder spring time Arctic Atmosphere should stall NH warming gains or temperatures trending upwards as within the last few years, making 2017 # 3 warmest in history.

And so it exactly was.

Not so,  but very close to it,  the failure here was the missing concept of cold air "feeding",  which occurs to the West of a cold temperature vortex,  simply because the circulation around a cold temperature vortex is Southwards to its West and Northwards to its East.  During summer, temperature roles are reversed,  a Low is usually colder than a High.  2018 expectation will be reminiscent to the past recent summers,  but for a shorter time period,
the strong summer cyclonic cloud dominance abridged will mean more sun hitting sea ice, I would expect 2nd place in sea ice extent with a very close to a clear navigation lane across Atlantic to Pacific, an open sea passage near or at the Pole.

Difficult as it may be, the lowest volume of sea ice at 2017 Maxima, combined with consistent rapid sea ice displacement velocities and the huge amount of snowfall stemming from the warmest Arctic winter in history, literally makes it easy for a change, #1 least volume of sea ice come September, with a bit of a problem with extent predictability, because sea ice is spread out from continuous daily displacements. The East Siberian sea to North Pole "arm" or ice bridge will figure prominent again, but will be eventually wiped out given the Gyre circulation, made strong last year, was recently reinforced.

This arm will appear and disappear fast in 2018,  because of the dominance of Gyre anticyclone
with a brief  cyclonic interlude.

The stable presence of an Anticyclone North of Alaska is normal when the Canadian Archipelago atmosphere is coldest, the clouds presence encompassing this anticyclone span is also very normal in spring. Eventually the temperature dew point spread will widen due to solar warming and the effect of a huge area High over the Arctic Ocean will hit like in 2007. I would expect record number of melt Ponds -late- from all that thick snow cover.

I expect earliest melt ponds since 2008, they should appear where a lot of snow has fallen, since we only have an educated guess as to where this is, melt ponds should appear in all North Pole quadrants except the Greenland sector.

This will accelerate the melt rapidly, numerous melt ponds will signal the start of very rapid melting, after seemingly sluggish melt daily rates interspersed with at times great variations caused by the lack of sea ice consolidation. The North Pole will be partially ice free because pack ice will be moving all over the place. A good Yacht Captain should be able to make to the Pole though.

2018 melting rate will slow mid melting season,  it will give the impression of sea ice spared a great disaster again. But the return of the Gyre High in August  will compact thinner sea ice pans to the detriment of extent and to the gain of ridging against the Canadian Arctic Archipelago.

Other parts of the world predictions
The Okanagan valley BC will be hot and dry at first then turn quite wet, Midwest North America will be mostly dry and very hot with clean air from the North except from forest fires, NE coast of Canada and US cooler wet turning same as Midwest come July. Finally Western Europe record high temperatures, not as much as North African records. 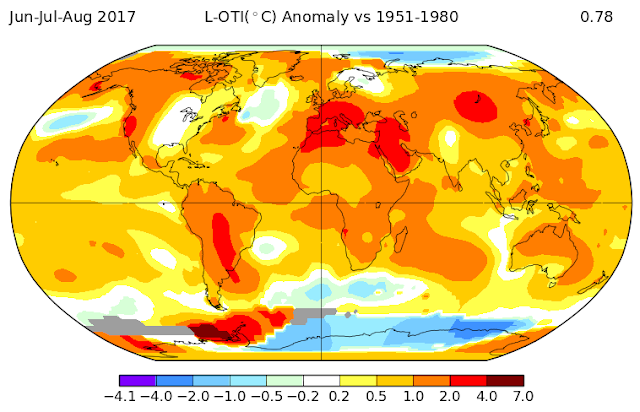 2007 projection had pretty good predictions,  the Okanagan Canada  besieged by record rains,  was about to seriously flood at the time 2017 projection was written,  until the weather changed hot and dry, floods were averted.    NW Europe was very warm as summer NASA map shows,  difficult to say about North Africa,  but it was equally quite hot.  Eastern North America was cool and wet at least till mid summer,  2018 will see a reversal,  cool in the West warmer in the East.  Then summer end vice versa.

We should find out about how much snow has corrupted the sea ice extent data this September after strong Arctic Ocean anticyclone gyre compactions.

There were 3 important discoveries in 2017-18 observation season, 1) A major one, T***<Ts Temperature of top of snow field is always colder or equal to air surface temperature, the equation of winter, first thought to be a sea horizon effect discovered many years before. 2) Sea ice horizon elevation is inversely proportional to precipitable water in the upper air column, implying the importance of solar shortwave radiation. A drier upper air provides a greater radiation conduit during the melt season. This brings 2007 melt to mind, when massive multi year thick sea ice melted very rapidly under an Arctic dipole, which was a very steady presence of anticyclone in July( unusual since ) , over the Arctic Ocean gyre area. Much drier air during any period with the presence of the sun highly increases shortwave radiation transfers:

With nearly same temperature during most of the period preceding and almost identical wind speeds, one day later from April 2 to 3, with time on these pictures from left to right 1 minute apart (April 3 to the right) . We have here a rare combination of required factors to determine if precipitable water (pw) column affects the energy balance at the sea ice horizon. The only difference was pw wetter by 2 mm the evening before, 5.32 vs 3.62 mm. The air was gradually drying up  towards a normal Arctic 2 mm,  more shortwave was hitting the surface on April 3, the horizon was always lower than preceding day throughout the 3rd as well. Local apparent noon warming was not as strong on the 2nd,  therefore rebound of horizon height goes quicker in the evening.
More such comparisons will determine the extent of pw effects...