~We must remember December 2019 boxing day all time in recorded history low temperature at center of Polar Vortex.
~As a matter of prognosis,  the  recent overwhelming stable wider area of warming in 24 hour darkness had a side effect,  a smaller area of stable cooling.
~The center of Polar Vortex: the Cold Temperature North Pole will be at the N.P.
~Sun disk observations have shown remarkable early spring warming Northwestwards from center of Canadian Arctic Archipelago,  why is this strange and unusual?
~2020 Vertical sun disk slight expansion numbers changes past 2 years all time low compressions numbering nil.
~ENSO variations closely resembles vertical sun disk expansion data

2020 Summer La Nina or El-Nino?   Is the big question.    The usual excellent NOAA updates and analysis suggest a neutral summer again.  There has been very peculiar no La-Nina rebound since very warm 2016 El-Nino.   What we know is that a La-Nina favors dryer air colder winter, as opposed to El-Nino creating more clouds (the cloud seeding theory) giving a cooler summer but warmer winter.   However, the evidence on ENSO variations from afar can be observed.  In the Arctic (and elsewhere) El-Ninos give much higher sliver clouds making spectacular twilights. Again, I observed both types this late winter,  none or few black or white wafer thin high altitude clouds, varying from week to week.  This indeed suggests a Neutral ENSO is coming.  But there is another way to indirectly observe ENSO trends:

~8 years since sea ice survived a 2012 summer calamity melt,  the tipping point may be a cleaner atmosphere.
~Sun disk measurement anomalies varied according to   economic slowdowns
~But right before ,  there was further change in circulation,  causing a different snow scape
~The extra sublimation caused by "wet” snow layer insulated the ground and sea ice away from the cooling it caused.
~There is a large question looming whether this noticeable tropospheric cooling  helped the stratospheric “ozone hole” just past.
~The master of world wide circulation,  the tropospheric Polar Vortex,  has moved Northwards
~Sea ice teetering already at record thin thickness,  will collapse on the Atlantic front.
~ENSO high cloud symptoms gave varying signals for the 3rd year in a row,  again no plunging towards deep La-Nina is foreseen.

Here is the preview ,  prognostics and projections will follow on the next article shortly: 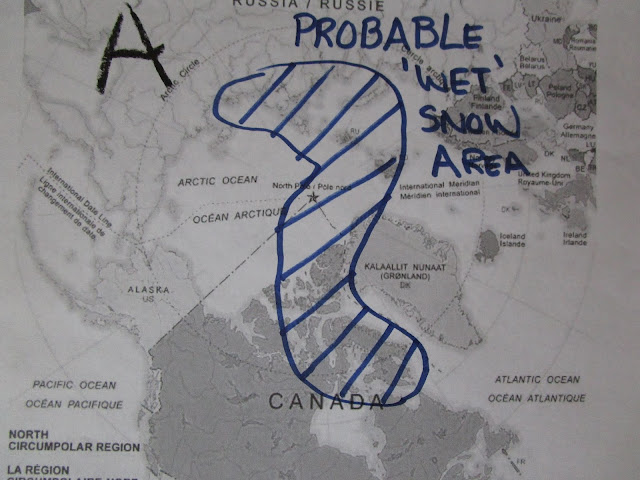 ALFHA sketch ,  it has been discovered that "wet snow" mainly fallen October 2019 ,  remained in a wide area causing extra insulation,  which in turn gave a second  thermal surface,  unique,  likely by keeping the ground or sea ice warmer,  but giving more sublimation, causing by its very properties, more air cooling.  And so was noted a particularly cooler Arctic winter than recent years past.  The location of this different type of snowfall was given here,  largely estimated by the tracks of cyclones, some which gave "southern" in nature snow leaving a track from South of Baffin to the Pole.  This wet snow area will play a large role in breaking down the usual "Atlantic front" ice barrier,  it is very well known thick snow insulation gives thinner sea ice and necessarily more early ice leads. 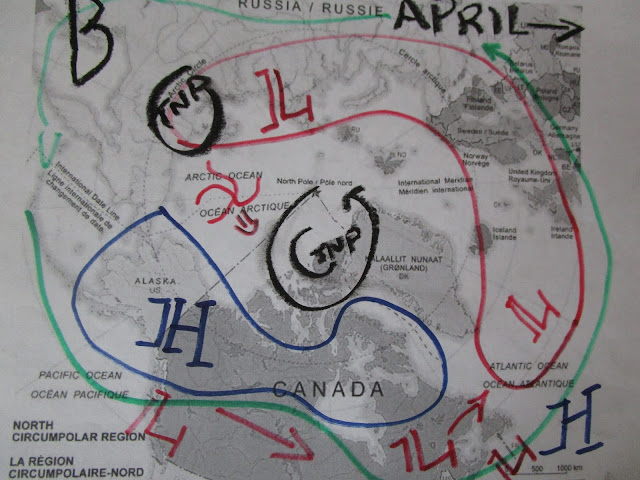 Figure BETA,  April 20 onwards,  the Cold Temperature North Pole shifted Northwards compared to previous seasons,  as determined by sun disk measurements and other means.  This caused a greater warming of North America since March,  and more rain for Western Europe.   The jet stream in green is at higher latitudes. 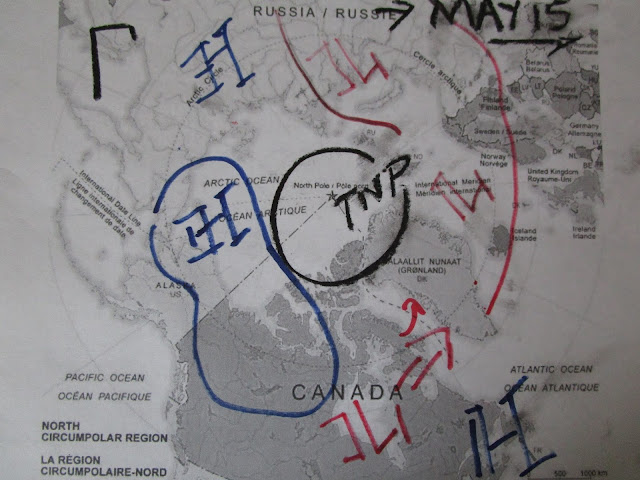 GAMMA map,   early switchover is expected well formed about May 15,  late spring cyclone anticyclone positioning start their role reversal, the CTNP will be largely unique.  Early warming of the continents is expected, in part due to lesser pollution world wide, but the dominant reason is the high latitude of the Polar Vortex. 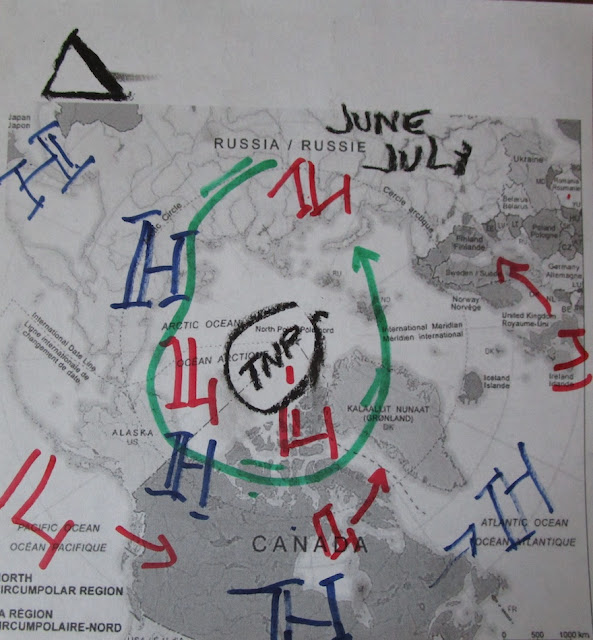 DELTA chart,   June July,  Siberian Highs will be drawn to the Yukon,  the CTNP center of the Vortex will hug the Pole,  therefore more clear weather there,  bad for sea ice,  however around especially multiyear ice along the Canadian archipelago coast,  cloudier cyclone driven weather,  global circulation slower movement for North Atlantic and Pacific cyclones,  reducing moisture
with super warming of the continents,  the North Pacific SST warming is not too strong by slower drifting Lows, because at July end, the Vortex should not be strong at all. 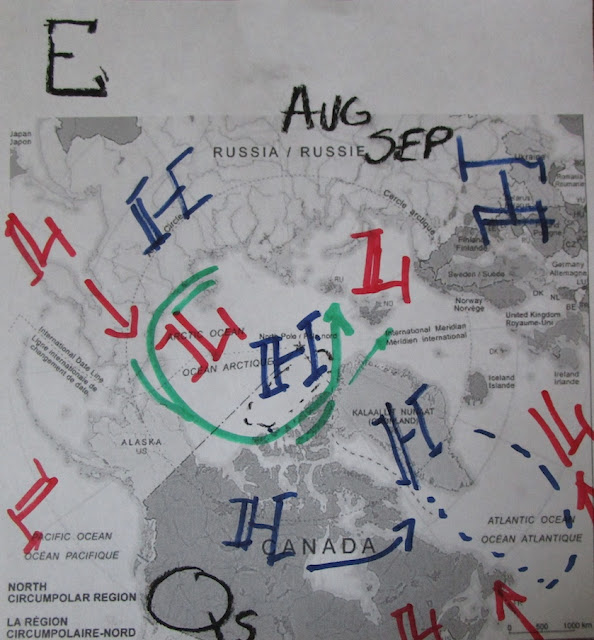 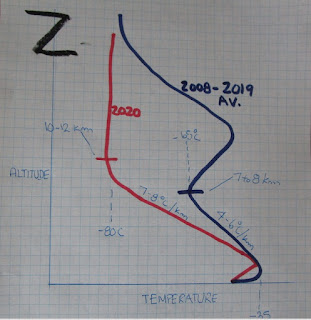 EPSILON August September projection,   likewise with the warming from less pollution be,  the reverse happens fostering cooling with the lower in altitude sun.  A High at the Pole should be prominent by September,  typhoon remnants  with North Pacific Cyclones should start their South to North journeys which will last the fall to winter.    A great stall in weather should be in dominance much to the South.   Namely for a great chunk of the West Coast of the US.  To the East Hurricanes will appear rudderless, at the mercy of Atlantic anticyclones.  The jet stream will show some faint life signs at the Pole as well.

ZETA GRAPH.    The stratospheric ozone hole of 2020 reinforced  the said surface cooling over the Arctic Ocean of March 2020, or is it vice versa?  Nevertheless,  the tropopause was hard to distinguish during much of March above Cornwallis Island Nunavut Canada,  Upper air profiles in the troposphere had often much stronger than usual adiabatic profiles,  while the average said profiles between 2008 and 19 were much more stable and warmer.  In here lies the contradiction,  what fueled the more unstable adiabats in 2020?  I suggest it was largely thinner  sea ice,  prevalent everywhere throughout the Arctic,  as presented on my previous article,  925 mb level Arctic temperatures were warmest ever.....  Temperatures of the 1 to 3 kilometer greater in height tropopause of  2020 was often -80 C, an ideal temperature for atmospheric ozone depletions.  This greater height of tropopause is reminiscent of 2011, which had many destructive tornadoes.  The dissipation of the stratospheric polar vortex very strong center  will not relinquish its winds overnight.  Therefore the strong possibility of 2011'sh tornadoes,  but likely further Northwards than usual.  WD April 21, 24 2020