Polar vortex spin off vortices, North Pole Cold Temperatures are Southwards well away from the Pole

~Polar vortex is the entire spinning of the Polar lower troposphere like a cyclone
~Vortices created within, sometimes one , two 3 or 4. Move about.

"A polar vortex is an upper level low-pressure area, that lies near the Earth's pole. There are two polar vortices in the Earth's atmosphere, which overlie the North, " Wikipedia

Not only 2,   there can be many vortices. This article from science alert is very good:

When there is an incursion of warmth towards the Arctic Ocean, like at the moment the vortices are pushed Southwards: 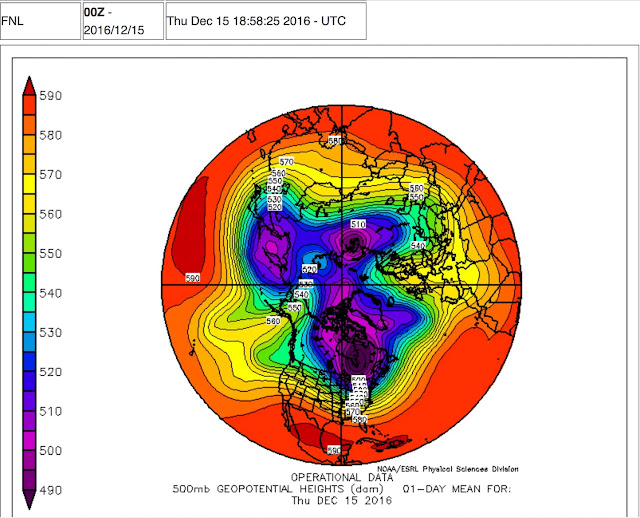 Northwards of Green delimited zone is the Polar Vortex of the entire Northern Hemisphere as expressed by NOAA 500 mb heights map December 15, 2016. Consisting of 3 vortices centers in dark purple, note to the right of each smaller vortex there is a Northward flow of air, to the left a Southward flow, yes it is cold in North America  however very opposite warm NW Europe. When a TV meteorological presenter says the "Polar Vortex" is back, he or she means a single smaller vortex part of of the entire Polar Vortex system. There is apparently no single word for 'vortice', hence the confusion of using Polar Vortex. Another way of presenting the case would be to say that the Polar Vortex is weaker, hence less circular, oblong and segmented by severe warming near or towards the North Pole. A single segmented vortex usually wraps the jet stream stream around it: 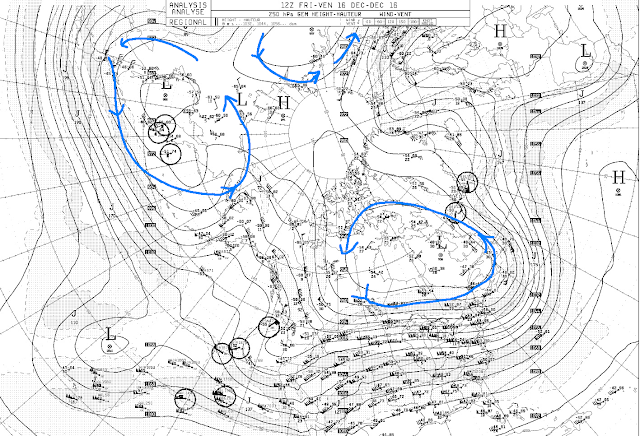 December 16 2016 CMC 250 mb chart. Blue trace my own. Within the blue trace is the center of vortices, there lies a surprise, it is the Cold Temperature North Poles. The coldest air possible. 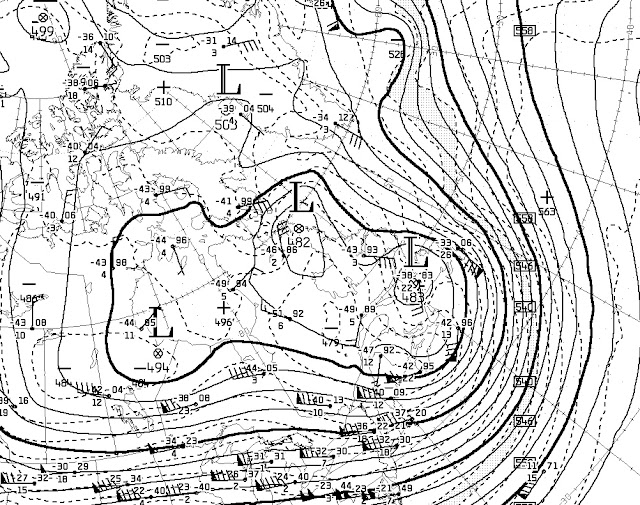 CMC 500 mb chart December 16,2016. Although ideally the temperature of the entire troposphere is found by a 600 mb chart (they are rare,  can't find). We can clearly read -51 C close to Great Whale river Northern Quebec,  this is the center of the coldest air in the Northern Hemisphere,  note Ellesmere 1500 miles North, -30 C.    At center of CTNP the winds are weak to none, similar to center of hurricane but on a mega monster scale.

It may said that it is colder further South than the Arctic, these are the days when winter builds up over the continents, the Arctic Ocean atmosphere being much warmer affects the weather every where Southwards,  the term Polar Vortex should be explained more correctly because this implies a Colder very expansive Polar region,  in fact its warmer at the North Pole devoid of any sun light whatsoever.WD December 16,2016