Chaos after the big de-coiling wave..

There are no more uni-directional flowing of this sea ice area centered about 81.3 N 170.8 E.
Sea ice is moving SSE in the right upper corner,  towards SE at center and Westwards on the top left hand corner. There is a whole lot of open water.  Thin clouds mask the true nature of sea ice hidden most times. But the easy sea ice deformation processes is obvious,  of apparently a glue of very thin sea ice,  slush or floating snow between surviving older sea ice pans.   Surface temperatures were mild on the 30th,  about -6 C,  at this temp sea ice doesn't form easily if sea water is warmer than -1.8 C.  However,  if the nature of top surface sea water is not so salty,  it can freeze,  but not accrete rapidly enough to slow the ice movement, as apparent here.  Deformations as seen above,  wouldn't happen so quickly if any of the new sea ice was thick. 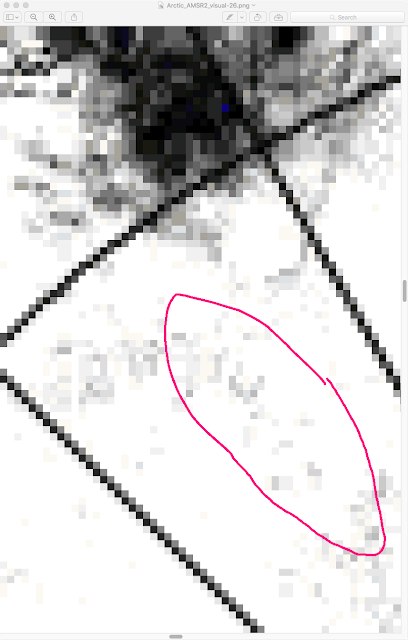 JAXA extent replication of the same area,  pixels do not mimic the open water areas.
I would expect the new ice to thicken when surface temperatures get colder.  But the open water
areas are not only confined to this High Arctic area of North Pole to North Siberian sector.  WD Sep30,2016
Posted by EH2R at 11:16 PM