Goodbye Waves can give a problem with determining wether they are sea ice or as they really are slush:

August 27-28 ,  JAXA depiction is fairly good ,  but there is a mix between Goodbye Waves and sea ice, seen on 28 apparently having more sea ice,  although the two are from sea ice, they are definitely not alike,  the prominent gap breaking up the ice bridge in two is more prominent on NASA EOSDIS capture (above),  the bridge is no more,  what is left is going goodbye. 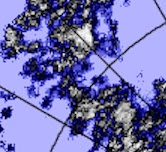 Goodbye Waves likely caused this confusion.  Look at the 2nd arm of the ice bridge reappearing on August 28.

The ice bridge collapsed quicker by the cuts of many cyclones,  it was already impossible to walk on
it late July.  It now exists like glue holding 2 tons together.  WD August 30,2016