If the  Trans Polar Stream has less ice,  it also means less momentum and continuity pushing sea ice towards the Atlantic,  this is what we are observing with JAXA August 27 through to 30 above.  Hence a retreat throughout the Atlantic Front and even if not seen with HRPT photos,  a lot of Goodbye Waves signifying  rapid melting.  It is a reverse flow mirage which has something to do in part with the broken off flow momentum pushing dense sea ice outwards and Cyclone Centre pushing winds Eastward. 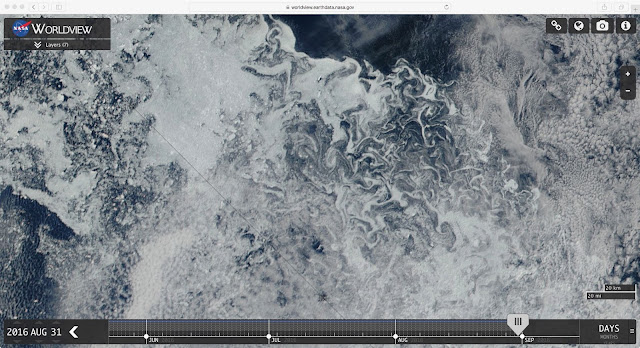 Its a mess on the other side of the pack,  with Goodbye Waves galore,  the ex-Wrangel Ice bridge is rather a modern Art collection of rapidly disappearing sea ice. WD August 31,2016
Posted by EH2R at 3:55 AM