There is a lot of talk about how dominant Arctic Ocean winds,  in some large part opposite to clockwise Arctic Ocean  Gyre, "was not favourable" for compaction,   gave a "lackluster performance" in June and therefore the melt season is basically "dull".... and especially melt ponds are not numerous.  NASA ever so potent and a hugely positive force for correct science,  projects
a large sea ice extent to remain Mid-September.  But will that happen?

JAXA captured intense activities,  despite apparently a "slow June",  if you look very carefully, there was a larger Gyre North of Alaska somehow turning ice clockwise,  with a classic motion compaction, opening water more and furthering the melting process.  Another  panhandle  of slower melting ice is already in place,  about Wardle Island,  the now often appearing Laptev "bite"  precedes a huge broken up ice field further North.  Ice is receding on every front.   Except Fram Strait which has a net output of sea ice.

From here ,  we clearly observe that the Cyclones did not impede a normal summer year melt as much as imagined.   Except for the famous melt ponds: 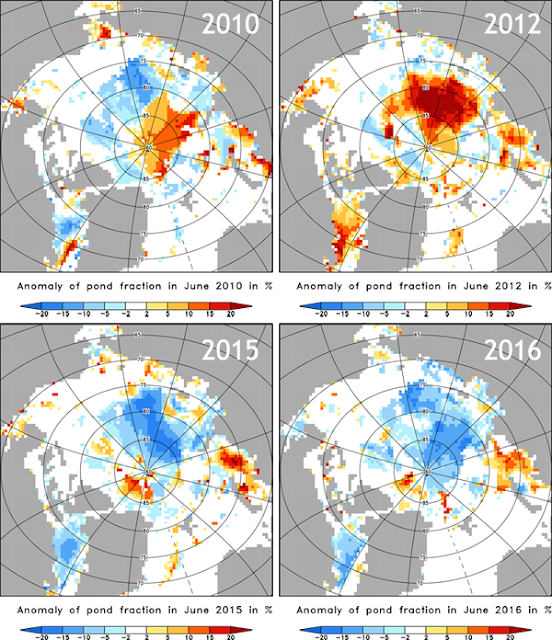 "Caveat"  model estimation of melt ponds,  as found on Neven's best sea ice site in the world,  truly bizarre,  especially in the Alaska sector of the Pole,  we have seen the ponds from space: 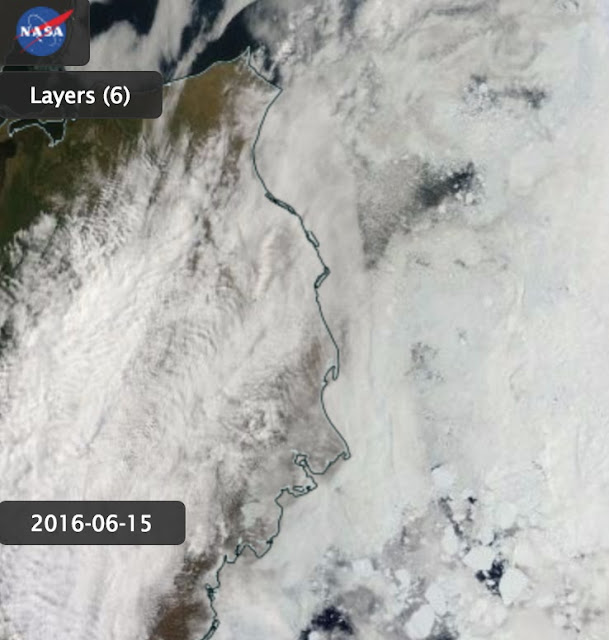 
Beaufort sea had record heat temperatures  reported.   But here we find again a hint,  the models calculate surface temperatures too cold.  It turns out that I have found North of Alaska model surface air calculation  too cold, a few weeks ago,  I made an example of it in June...   The model output was in violation of above sea ice refraction prime rule:  surface air can't be colder than top of sea ice,   especially applicable  in summer!  When ice is a heat sink.

Having been studying apparent illusions for years,  it seems obvious that we are in for a greatest melt,  despite smoke and mirrors clouds/fog and ice.  Its not that natural illusions are set to deceive,  rather,  belief in a conclusion far away from now,  does that quite well.  WD June 12, 2016  (few seconds before midnight)..