Unless it is a big melt year,  end of July usually offers a few clues about coming minima outlook.
This year is no different,  but has its own quirks,  namely an area about 400,000 km2  north of Beaufort sea which had a continuous injection of broken ice pans,    the physics involved is simple
and complex by many varying geophysical parameters.

Ice melts quicker when ice core temperature is close to 0 C.  This is the main reason why melting occurs faster at end of July,  there are of course other factors,  which is warmer air and sea temperatures,  but it is very difficult for surface air to warm a whole lot with the presence of sea ice2 meters below.

From the constant presence of ice a summer temperature battle ensues,  and thus temperatures without a great deal of very warm advection injections remain steady, especially by latent heat  of fusion of ice, the warming can't really be measured by air temps.   Eventually the most vulnerable sea ice, an ice pan surrounded by warmed sea water, vanishes quickly.  The melting point in the ice column was  achieved by many pieces of sea ice as per July 25 2016, achieving a  greater melt than all previous days.
Before July 25,  the smallest blocks of ice didn't survive very long,  leaving the larger ones to travel Westwards.  However now is the time when the greatest melting can happen,  the heat transferred to sea ice, a continuous heat sink, renders sea ice to mush to melt to water.

The only Mass Buoys currently active; 2015f 83.11 N 139.14W has an average core temperature above -1 C and strategically located Mass Buoy  2015 J   77.8N 157.16W has similar ice core temps.  These buoys ice surface  are more or less not surrounded by open water. Again, the latent heat of fusion of sea ice captures a lot of the heat otherwise manifested warmer on ground surfaces of the near by archipelago Islands. 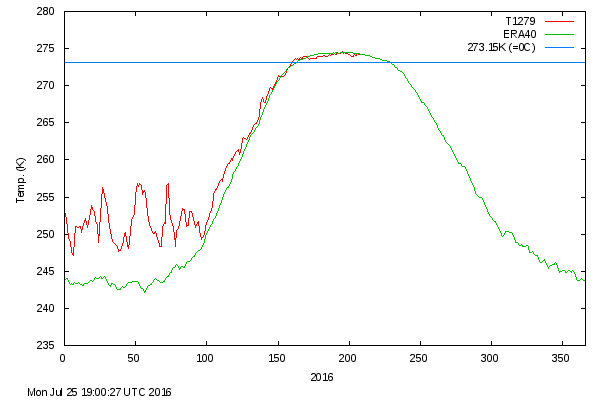 Summer DMI model calculation of surface air temperatures appear usually steady,  over all past summers, rarely at great variance with about +1.5 C at peak.  This is a good example of sea ice moderating air temperatures when the latent heat of fusion is active.    The wild variances over the dark season are due to warm air advection largely by Northwards penetrating cyclones, these carry a much wider temperature difference than sea ice during winter,   summer cyclones apparently do not give such effects, which is quite fascinating.   wd July25,2016