~Only much sunnier Arctic Ocean summers can cause greater melts...
~There was more solar forcing prior to 2013

DMI80 average temperature is an excellent source of data,  despite being a temperature model of models.   In the case of sea ice, it would be better if the data was presented strictly for sea areas not a mix of land and sea.  DMI 83.5 North upwards would be nice to have.  Nevertheless,  temperature over sea ice during summer barely goes above +2 C,  averages about + 0.75 C .  This is explainable by the equation of winter:

Temperature of top of snow/ice is alway colder or equal to Ts,  surface air at about 2 meters above.  The only thing warming top of sea ice is the sun or warmer air,  both may be considered from the same source.   With enough exposure, the sun melts sea ice snow top,  water on ice then may never be so warm,  therefore the just above 0 bit.   Hence DMI practically always is a measure of top of sea ice temperature,  with a partial land contribution,  some from open water,  therefore the at times +2 C daily average maximum.

IN spring and summer, if it is sunny enough,   temperatures may be sufficient to crack open thinner sea ice giving leads to also contribute to warming.   But it has to be sunny.  In the not so distant past, surface temperatures indicated it was sunnier:

We observe 1980 to 1990 summer seasons always equal or exceeding the average trend in green.
It is not indicating open water at the Pole but rather,  indirectly giving out the presence of the sun,
largely favored when overall sea ice was thicker.

Of all summers which mattered 2009 and 2013 stand out.   Following the great melt of 2007 one would expect thinner sea ice to cool summer surface temperatures in 2008,  but that did not happen,
because there was a cloud thinning La-Nina in 08,  however 2009 had a drop in temperatures.  The best example is 2013,  immediately following the greatest melt of 2012,   summer 2013 thinner sea ice did establish itself for a vast area of the Arctic Ocean:

Thinner sea ice is very conducive for clouds,  and clouds very "welcoming" for cyclones.  Despite
more than 11 million km2 sea ice melt of 2012,  2013 thinner sea ice increased cloud albedo,  effectively cooling the summer for most of the Arctic. 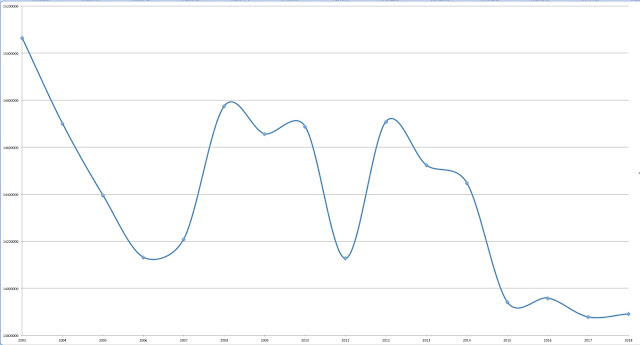 JAXA extent maximum data 2003 to 2018,    there are 2 increase peaks from mainly descending sea ice maximum values,  the 2007 to 2008 and 2011 to 2012 peaks,  it should not come as a surprise that 2007 and 2012 had major sea ice losses during their respective following summers, the winters preceding were characterized as having less clouds,  more accretion by  dark starry nights continued by bright sunny days. But note the great extent maximum increases in 2007-2018  and 2012.  The steady lower maximum peaks since 2015 are equally attributable to the contrary,  warm cloudy dark seasons indirectly interpreted from DMI graphs above,  persisted during each following summer.   Here is ample evidence that the lesser winter extent gains exceeded the summer melt losses.

TOTAL melt numbers again reflect extensive cloudiness,   2007 (first high peak) was spectacularly exceeded in 2012 with nearly 12,000 million km2 extent loss,   translation:  2007-08 and 12 sea ice had  greater solar forcing summers,  2010 and 16 had smaller ones,  but  much opposite 2009-11-13-14-15-16-17 and 18 more or less have had increasing melting at a much slower rate,  these years were characterized by their extensively cloudy weather all while sea ice thinned during equally cloudy from one year to the next winters.   When summer sunshine got through longer, the melts became progressively greater,  2007 had thicker sea ice than 12,  but when this same sun got through in 12,  the melt was greater from a thinner sea ice base.

There are 4 minimum dips on this graph,  2004, 2007, 2012 and 2016.  The most fascinating point to make is why there was a following summer extensive minimum increase after such great depletions? Why would there be lesser sea ice melting when there was certainly thinner sea ice base after each great event loss?  2013 had the most phenomenal minimum comeback.  By strict terms of achievements,  at 2012 minima,  with less sea ice than ever, led to 2013 maximum, which started with less extent at maxima and wide spread thinner sea ice than 2012,   yet extent minima in 13 had much more sea ice,  the weather wasn't so cold to justify such a strange feature,  but there was plenty thin sea ice which broke up very easily during its spring causing the clouds and cyclonic weather to prevail throughout summer,  stalling greater disintegration of sea ice when it should have disappeared more readily.

Post 2012 Minimums  were all greater in extent,  yet NASA GISS Northern Hemisphere average temperatures were all warmer than 2012 except for 2013.  This temperature record contradiction simply expresses the different world of sea ice,  which may appear to buck the Global Warming trend,  but it is simply a zonal feedback event from clouds over sea  ice not as massively thick.  The multiple presence of huge Arctic Ocean ice islands  spanning in all its quadrants,  more common in the 80's,  basically encouraged more solar forcing against fiercely persistent sea ice,  having much fewer summer leads of open water,  a friendlier  seascape for a persistent high pressure often to the West of the much larger summer polar vortex.  This was the most common weather feature of the Arctic Ocean,  an Anticyclone hovering about the Arctic Ocean gyre area,  the very physical source
making  the  famous gyre turn clockwise,  equally the start of the trans continental sea current  starting from North of Siberia towards Fram Strait.    Summer 2018 saw both of these currents mainly absent.  Despite spring onslaught of very steady High North of Alaska.   One would assume these currents to dominate at times,  especially when the winds became weak, but 2018 sea currents appeared lame at best, incapable of overcoming the weakest winds.  This lack of consistent compaction caused a vast new area of open water to appear well North of Ellesmere and Greenland.
Chaotic spasmic variable currents is the new sea ice circulation  mode,  all this may appear to prevent great melts,  but these are only one sunnier summer away,  or rather sea ice Maximums will surely shrink in extent to about 11, 000,000km2,   this is when 2012's events, or worse,  will occur no matter how cloudy the summer Arctic Ocean may be.   WD September 30 2018