~When most September 15's are Minima time,  sea ice in 2018 is still rapidly vanishing

NASA EOSDIS September 8-14-15 loop. 79 NORTH 180 West
Great melting has occurred when most times it should be slowed to a stop, indicating warm sea water and air effects with no possible appreciable compaction. 8 to 14 show simply melting with “goodbye waves” galore, individual packs last stand, while 14-15 comparison has differing goodby waves,
meaning different packs on their way to water. There is no doubt about strong melting very late in season. 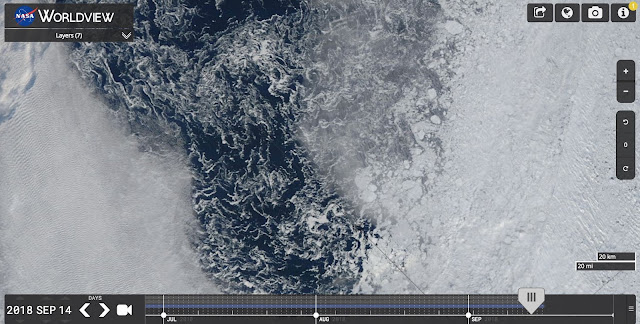 It is not impossible to conceive that "goodbye waves"  may be mistaken as ice packs,  as on passive microwave detectors. 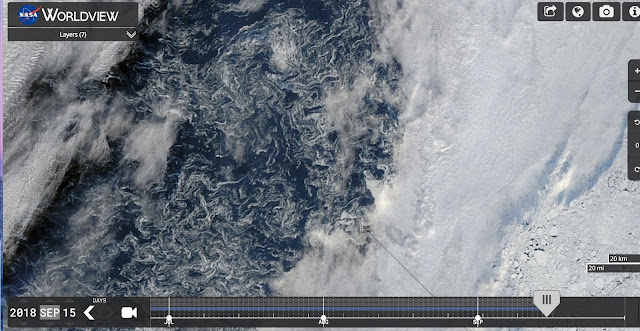 There has been a major Arctic Ocean climate circulation change ever since
the great melt of 2012, whereas a new thinner sea ice based weather has been
firmly established. While during summer this regime is characterized by the
presence of long lasting cloud coverage favoring the presence of hovering
lingering cyclones, effectively slowing down summer time melting, this very thin ice regime
also favors more clouds during autumn and winter, whilst less melting
during summer was established,  reduced accretion during the other seasons took hold.
The net resulting effect is a slow but gradual thinning of sea ice, which
culminates to now, the minima season delayed.