~30 years ago sea ice regained a lot of thickness every freezing season especially during darkness.
~Last 10 years thinner sea ice went along with a warming
~2017-18 near stagnant winter circulation patterns have equally changed

It took a long time to get this late March 2018 IR 10.8 microns  picture of a drier North American Arctic,  we see all sorts of sea and land  features from Greenland to Alaska: 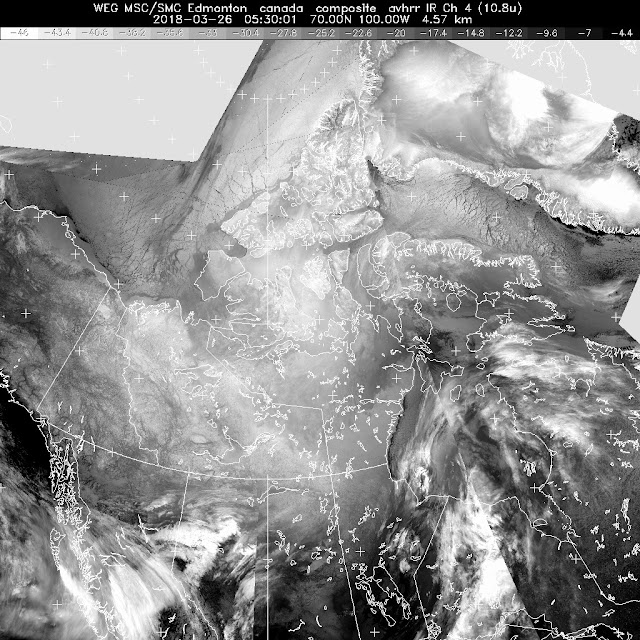 I can show 30 years past pictures when this dryness started in December.  If history repeats itself, barring La-Nina going suddenly really strong,  clouds of ice crystals from the cracking open of thinner sea ice will be strong coming mid April  onwards, causing high albedo clouds to return.  If so the drying season 2018 will last about 3 weeks,  instead of the usual 15.  It would be good for extensive cloudiness to return though sparing a great melt,  for without massive overcast clouds throughout the melting season there would be no sea ice.

A circulation pattern,  as explained on my previous articles,  synergistically combined with thinner sea ice and warmer temperatures to drag out a pervasive moist or cloudy Arctic Ocean lower atmosphere until NW Europe got cold,  this broke the pattern,  at least for the North Atlantic side.
Again it took a long long time for West of Central Russian Arctic to cool to average temperatures.
Without this event,  the Arctic would have not have a drier atmosphere all winter surely precipitating a guaranteed super melt come September.

Nevertheless impressive is the last  9 dark seasons of warmed up Arctic Ocean  atmosphere:

There were quite strong El-Ninos in the 80's,  1982-83 and 1986-88,  barely showing any influence over the Arctic Ocean laced with much thicker sea ice,  capable to travel on by humans from Russia to Canada,  not requiring amphibious vehicles. for instance.    But the colder temperatures then imply  dryness,  no need to show pictures,  especially by inferring  partial pressure of water vapor at lower temperatures alone.

The latest High Arctic data has shown some resurgence to dryer air,  which is very good until the sun gets to high in the sky.  This may be part of a re-surging towards La-Nina process,  which if true would be a disaster, if lasting throughout the summer,  mostly by clear air allowing the devastation of sea ice by the higher sun. But recent records show a propensity for ENSO to tend to stay toward El--Nino rather than La-Nina.  WD March 26 2018