~A great deal of energy is necessary to sublimate snow to water vapor.
~This energy likely creates a shallow cooling layer on top of snow surface,  a potential component of air inversions.
~ The process is continuous as long as there is snow,  helps explain the 1st rule of sea ice horizon refraction.

Refer to graphs on page 89.   Where boreal forest top of ground snow or air slightly above it was always colder than surface air.    Although they did not highlight this feature in this paper, this confirms what happens in the Arctic as well.  A boreal forest heavily snow clad horizon should be quite similar to sea ice horizons.

Remains to identify the reason or reasons.   What creates a skin surface to be colder than either air or what is below a skin surface?  It is counter intuitive,  but sublimation seems to fit the bill, it happens as long as there is snow,  when so there would be an endothermic process involved,  which infers a drop in temperature.

A 5X closer look, March 31 2017  top of Arctic snow,  easily capable of carrying the weight of a person with very little sinking,  the top layer can be as dense as 40 to 60%, implying the presence of ice.  At first mid afternoon top of snow appears dense ,  a few hours of sun seems to spring up vertically elongated snow rods.  The mobile viewing apparatus sank more at the third picture without weight pressure applied,  suggesting and expansion of spacing between the grains  -as seen here - likely in part caused by more water vapor.   Eventually the lower sun rays appeared to influence the return of snowflakes closer together. 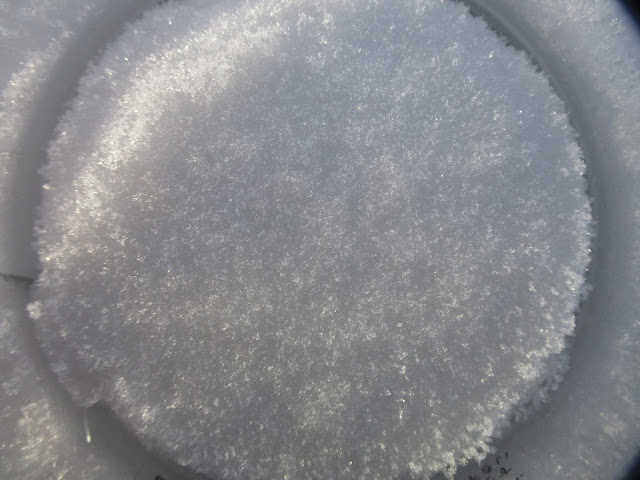 Despite high density snow,  there is a lot of air within a column of snow 1 meter high (3rd picture).  It is a greater source of water vapor than with a shallower layer of snow which gives a warmer subdermal temperature. The top of a snow column is a conduit to air,  of which sublimation occurs continuously.   This requires a lot of energy which should be detected by loss of temperature: 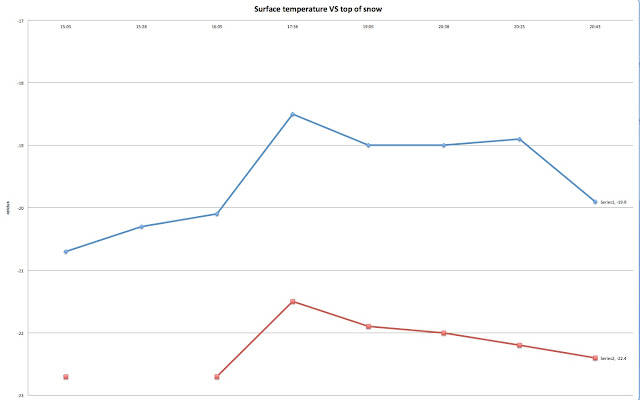 Throughout the modestly March 31 windy day (10-14 knots),  surface temperatures in blue,  measured by ventilated high precision thermistor,  were always warmer than top of snow skin subdermal (in brown,  equally measured by high precision thermistor).   Just below snow skin was even colder snow,  at least on this day, being more a function of permeation,  or the basic long lasting surface air temperature imprint which varies day by day,  24 hours before surface air had much colder temperatures.  Heat was transferred to the top of snow mainly from the warmer air and from solar radiation fueling  the vaporization of snow to water vapor.

During no winds clear March 24 afternoon,  the surface temperature difference vs snow skin subdermal was far greater,  by 2 C,  this suggests the best way to measure sublimation is when there is no air turbulence, when thermal mixing is much reduced, allowing for top of snow thermal stratification to be enhanced.  If there was another reason for colder snow skin,  this matter would have been brought out by differing weather conditions,  if there is an esoteric radiative cooling effect, independent of winds,  we would have a similar subdermal skin cooling,  windy or not.    Optical observations also confirm lesser horizon elevation boosts when  it is very windy.

Applied on the totally white snow covered Arctic scale,  the primary reasons for persistent winter inversions may be caused by the colder ground or sea ice with radiation escaping to space twinned with the sublimation of snow which is a continuous process until the sun is high enough in the sky to warm up top of snow surface, in spite of continuing sublimation,  the extra heat compensates and appears to cancel sublimation cooling, triggering an even greater loss of snow cover without outside temperatures being well above 0 C.   Since the end of 2017 long night,  the Northwest Passage by Cornwallis Island had often a great deal of diurnal ice fog bursts,  which may be explained by the presence of significantly above normal snow cover generating more water vapor,  sublimating vapor adds to Arctic air bromine chemical mix always capped at the near permanent inversion peak temperature usually varying at about 800 meters in late March early April.

Snow column substitution experiment
A way to separate a possible thermal radiance cooling effect from sublimation would be to remove a portion of the snow column with a body warm enough to affect the snow skin temperature  immediately above.  I used a 9.3 liter sealed container having a liquid,  mainly consisting water,  made a cavity once filled with snow,  placing  the sealed  container with +27.7 C liquid within,  cover the exposed side of container with snow and measure subdernal skin temperature above an undisturbed  10 cm layer of snow separating the skin and top of container.

A few meters away from this experiment,  there was the regular high precision thermistor subdermal measurement which regularly showed a +.4 C skin cooling vs surface air,  lower than measurements made March 24 and 31,  because it was very windy, high winds above 10 m/s removed all chances of extensive stratification.   The subdermal temperatures above the container were always equal or slightly warmer than surface air,  the opposite result above a complete snow column.  This implies a warmed top snow layer without a skin cooling effect.   Snow sublimation was highly likely occurring but the heat supplied by the liquid container overwhelmed the drop in temperature required to vaporize snow,  similarly to when the sun is high enough and masks sublimation cooling.