Arctic Snow sublimation physics is very hard to evaluate, but happens to be another very important reason why snow creates deeper cooling. 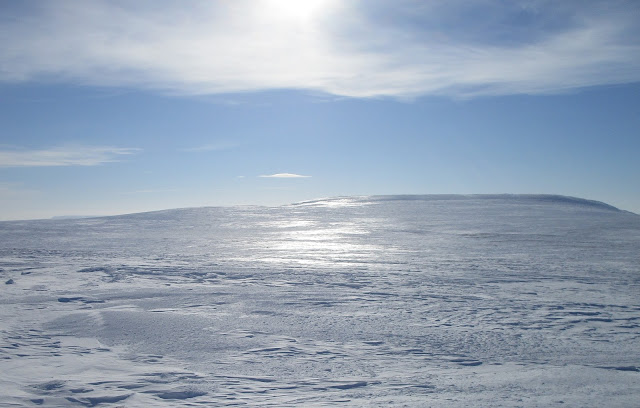 Looks of 40 to 50  cm snow carpet,  near record thickness,  at the South shore of Cornwallis Island Nunavut Canada.  4 or 5 days of moderate at times heavy winds appear to have hardened the snow skin rather than distribute it evenly.  The process is more complex than that,  as this picture suggests,  there is very thin ice over the entire canopy causing a direct reflection of wherever the sun is,  the ice really forms heavily on the thinner snow cover,  where sublimation is stronger,  but here it is not so obvious.  This polished veneer disappears in a few days suggesting it was a very dense crystalline cover. 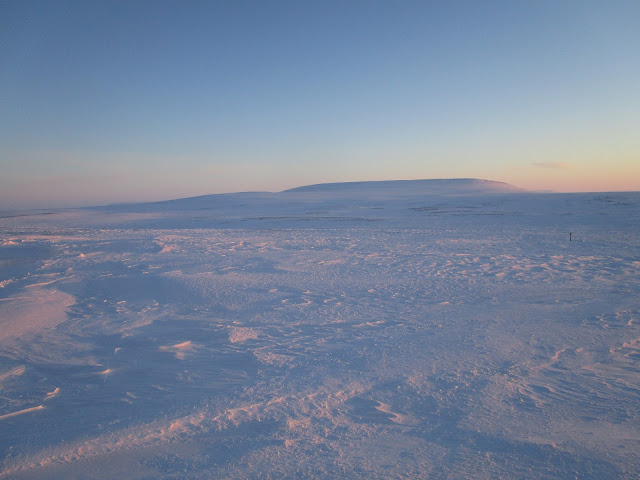 Same day. in the dimmer lower direct sun,  there is no reflection on the same slope because the light is less strong,  scattering is spreading out photons more thoroughly throughout a thicker atmosphere,    where at first glance,  ice appears to have formed,  it is again more complex,  a closer look reveals a denser top snow crust or skin. Likely 50 to 60 % hard top, a mix of very fine but compacted crystals,  or a rough precursor to ice.  What happened was intense venting of water vapor by the sublimation process,  the winds caused a vacuum amongst the porous cover which accelerated the vaporization process.   When so, top of skin hardens,  column of snow slightly shrinks causing more sublimation vapor pressure,  a natural version of a cold pressure cooker.

The great snow cover of 2017 made it difficult to measure sublimation rates,  while windy it snowed as well,  the fields of snow changed shape daily: 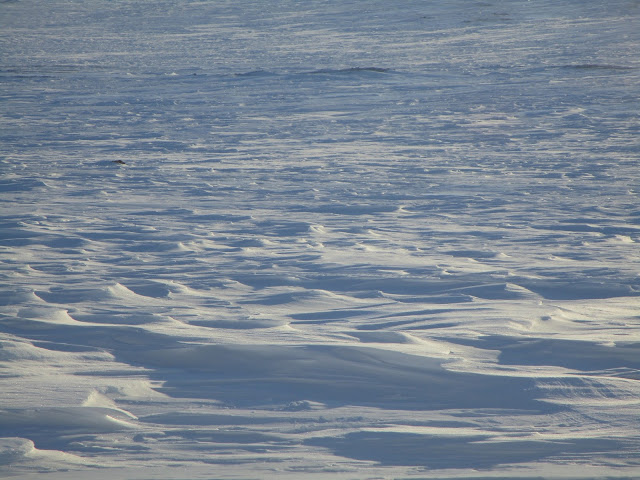 Days of Winds carving the thick snow canopy made for a chaotic surface,  imaging the process which created it.

There can be several layers of snow crusts in one column,  each crust can be 500 to 600 kg/m3 dense as opposed to the entire column being 400 kg/m3.  Within this top denser crust,  the snow temperature was always colder than standard 2 meter air because of sublimation,  this so happens as as long as there is a snow cover until the sun really is high in the sky.   The solid small snow crystals to water vapor process requires a great deal of energy to happen,  this energy is detected by the temperature drop within or on top of the skin and by conduction on the air immediately above it.  Unfortunately,  sublimation can only be measured  accurately with lab conditions,  the Arctic outside is loaded with varying weather, making sublimation appear different with each possible weather scene,   when in fact it is rather a continuous process.


Briefly by the numbers,

A typical 74.5 degrees latitude North High Arctic day top 1 cm snow may absorbs about 2.84 MWatts per meter square.    Therefore it would take 5.3 days for the top cm to evaporate by direct sun radiation alone, which has been observed as such,  but sublimation heat comes from potentially many other sources,  from the warmer snow,  the warmer air,  back scatter from clouds,  heat from ground or sea ice,  by winds drawing out the heat within the snow or ground column.   It is also very difficult to measure temperature at the surface to air interface due to UV affecting thermistors (coming essay).

To maintain a loss of temperature of 1 degrees C within the same top 1 cm of dense  crystalline snow, 10,000 watts per square meter would be required,  this is clearly not happening.  I have observed more like a permanent cooling of .1 to .3 C of the air immediately off top of thick snow column,  this means the thickness of snow absorbing heat, rather sublimating,   is very shallow,  vaporization is actually happening in more like terms smaller than a millimeter,  like the shrinking size of the crystals themselves with their micro-surface and total entity vaporize,  if we consider 1 mm surface, meaning 500 grams per square meter,  it would still take about 90 watts per meter square of energy to drop the surface temperature by 0.1 C.  This is what is likely more realistic.

During spring time, when the ground or ice surface becomes much warmed,  the top of snow sublimation should be stronger.  Thermally speaking this sublimation cooling is eventually overtaken by strong sunshine as observed at the sea ice horizon,  sublimation occurs but there is more external solar forcing masking its signature optical effect.    During the long night,  absent of solar effects,  with no shortwave  radiation,   it would be sensible to believe that top of snow or sea ice temperature would be greater than air right above on most occasions,  especially absent warm air advection,  since the only source of greater heat is from the covered by ice much warmer ocean,  that is not the case,  in fact as soon as sea ice covers sea water completely the entire ocean horizon sustains a higher height than Astronomical Horizon (A.H.) until "first Melt Day",  till well into spring following the long Arctic night : 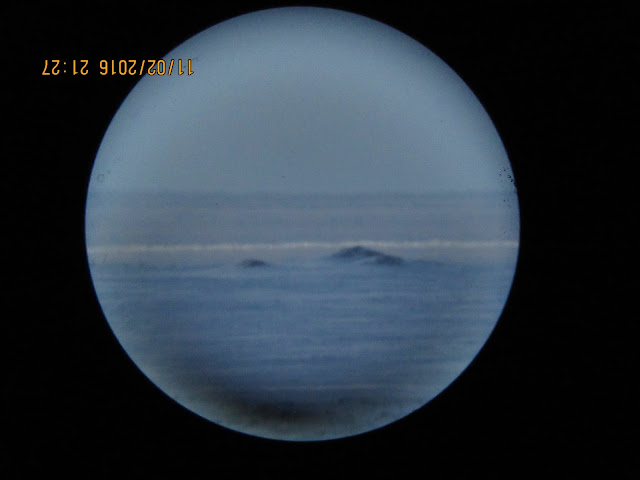 High Arctic November 2, 2017,   Northwest Passage pretty much completely frozen, from this moment onwards the sea ice horizon will never lower below Astronomical Horizon.  Here 2.6 Arc minutes above A.H.  .  It is counter intuitive, after all sea ice is less than 30 cm thick,  a lot of heat is escaping from the sea despite the ice shallow sheet.  But there is the process of snow and ice sublimation,  which cools the solid top colder than the air right above, this creates a near permanent inversion causing the horizon to rise. 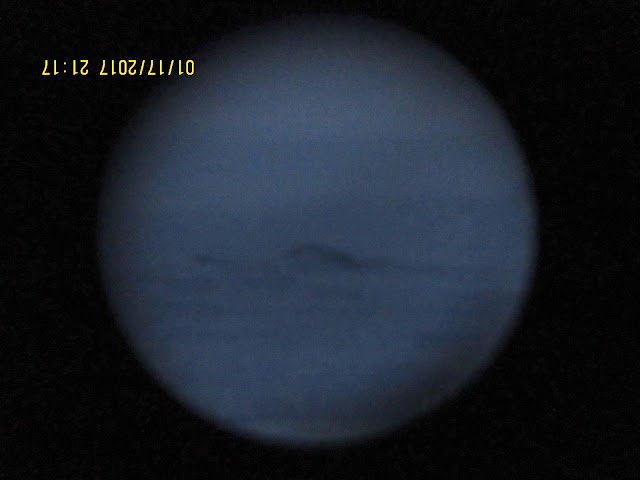 at least 1.6 arc minutes above A.H,  nearly 2 dark  months have passed,  the ice is 70 cm thicker than in November picture above this one.  Less radiation escaped to space because of sea ice insulation properties.  Throughout all dark season observations,  not one was at or below A.H.,  all were above.  Indicating a permanent colder top of sea ice than surface air.  This is easier to explain,  there is a colder sea ice layer always maintaining a colder top part,  but that is not always theoretically possible.  Sometimes cold air advection  should overtake a warmer thermal ice imprint,  making surface air colder than top of snow would lower the sea ice horizon below A.H.  ,  this was never observed.  Another reason to posit that snow sublimation always helps maintain an inversion at the interface between ice and air.

Low surface thermal inversions have a huge impact over weather,  they stop surface moisture from rising reducing cloudiness causing more over all cooling to space,  they create,  no,  they are the reason for winter to exist.  When they vanish it is a sign of summer.   When there is a lot of snow on top of the ground or sea ice,  this literally further cools temperatures,  with solar heat  already reflected back up by very white snow albedo,  also made further colder by snow sublimation.  Although exact temperature numbers about this subject are very difficult to be precise with, a small temperature drop on the surface may implicate a very large over all cooling.  WD April 28, 2017