Dispersed, emaciated, heat diminished sea ice barely holding together as once upon a time. 1988

28 years ago,  Mid-November 1988,  sea ice was fierce,  consolidated,  encouraged the build up of winter.  Its ice was expansive ,  all the way to Spitzbergen,  North of Ellesmere it was the world
of the big lead,  a lunar phased tidal break up,  it was also the time of the famous ring barrier,  a cousin of the big lead,  between Northern most Ellesmere and North-Western.     1988 IR picture above was bitter cold white,  signifying a normal -30 C or colder.  2016 note day after , November 18,shows the ravages from a warmed planet.  The Big Lead does not form because sea ice is extremely de-consolidated.  One Japanese North Pole expedition the following year,  was on ice, just off Ellesmere,  a huge sound was heard by all,  like thunder for hours,  very scary noise.  It was the Big Lead,  opening,  freezing and closing up again within 2 days.  The well equipped expedition shortly thereafter encountered a wall of broken up sea ice shingles, 10 meters above the ice plane, 1 Kilometer wide along the course of the coast for as long as eyes can see.  It took them 1 week
to get through the big lead wall,  1 kilometer a week speed.    2016 offers no such icescape. 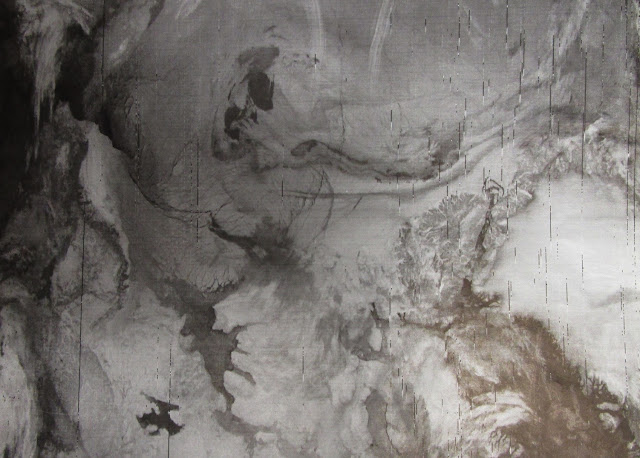 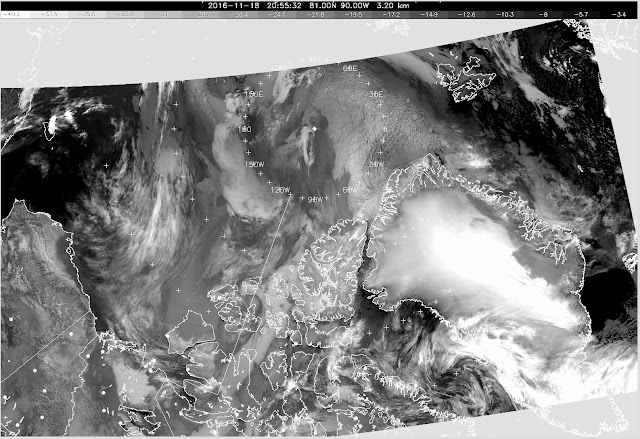 November 18, 2016,    whatever is cold is over Ellesmere and Greenland,  with very little sea ice freezing as much as 1988.  Cyclones dominate the Arctic Ocean.  Spitzbergen is surrounded by open water,  the strait between Northern Ellesmere and Greenland has loose pack ice,  no tidal ring forming.  WD Novenber 19,2016.