~  Satellite temperature data impossible unless great portions of sea ice are covered with water.
~  Even in coexistence with much colder surface air.
~ An ice sandwich not!
~Buoy data correlates well with some NOAA/NCEP  (June 23 corrections), but doubts still persist.

The corrections in red were written after I read some quite intriguing higher resolution buoy data...

NOAA/ESRL skin temperatures are above 0 C for a great portion of the Arctic ocean.  Very well!
It must be water ponds or wide open water …  (the 0 C average may due to really interesting water under the top of snow,  or something likewise exotic (June 23,2014 )Not so: 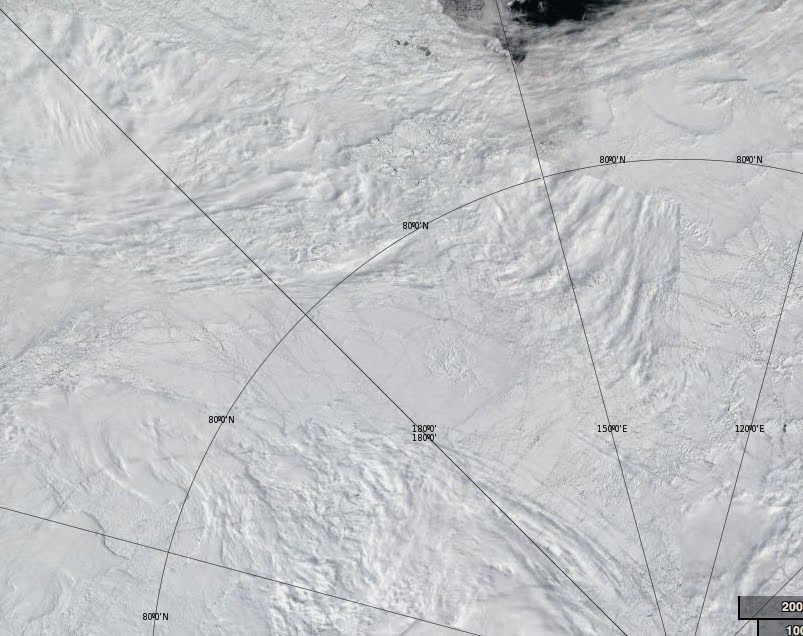 NASA Modis on the 14th of June,  peering through the clouds there are a lot of leads, broken ice.  But no great water coverage (Hence the interesting possible presence of water under top of snow).

OK here is the problem, NOAA also had much cooler surface temperatures (a look inspired by Neven):

Same time period surface air,  2 meters high above the ice,  a good deal of it under -2 C.
The adiabatic lapse rate potentially caused could be as large as 1 C/meter or 1000 C per Kilometers.   A geophysical impossibility.  If achievable by artificial means (here the sun may have forced a warming at about  the skin surface) without , it would cause some extraordinary inferior mirages, making the ice look like water though (the optical irony here is sweet).    The constraint for adiabatic lapse rates are governed by gravity and the specific heat capacity of air at constant pressure 10 C  per km.  Unless there is sun on a black surface  (The black surface may be in fact green sea ice),  like a road mirage,  the idea of accepting this data is preposterous  questionable.   The possibility of sea ice existing above surface air temperatures has not been observed optically but for thin newly formed sea ice (the apparent horizon not lowering further than true astronomical horizon turns out the be more complex than I thought, more study is needed).  It is possible by sudden advection of colder air, but this would create rapid cooling of ice surface by adiabatic and convection processes.   But just how  shallow ice pond water above 0 C can subsist with surface air -2 C right above suggests an impossible scenario (Correct,  buoy data suggests diurnal solar forcing followed by rapid cooling on top of ice surface,  its possible by external forcing).

My observations have shown that thick ice should be colder than air (correct,  but top of sea ice is greatly affected by sun rays),  especially at this time of year.
However melt ponds would change the surface temperatures.  But since we don't have extensive melt ponds now.  We must consider a lot of open sea water.

Considering this reasoning, looking back at 2012 the Arctic Ocean was awash with melt ponds or open water:

Was it an ocean covered with melt Ponds in 2012? No, but a clue is given by the surface temperatures in the Western sector of 80 N to North Pole, especially the swat in the Alaskan sector of the Pole,  where surface temperatures were +3 C above the ice surface (Here there was   likely bad data because of the solar forcing lesson just learned,  average temperature of top of ice/snow layer should be warmer than surface air,  although there were few buoys in the sector, 2011j did not show such contrasting temperature).  That is more acceptable. However an inversion of 150 C/ 100 meters has never been officially (with great precision) observed naturally,  as far as I know,  another impossibility has been recorded as data.  Since no melt ponds were observed, the 0 + "skin" temperature was equally impossible (not so, very possible), unless there was a great deal of open sea water , not apparently present  (There was the sun capable of warming top of ice/snow layer by 6 C or more, an incredible warming).

Arctic "Skin"  temperatures and surface temperatures by NCEP are to be taken with a lot of extrapolation in mind, especially at spring time when temperatures between ice top and air become close to 0. Unless somehow re-calibrated,  or with open water areas in mind.  I suggest field observations from buoys,  or optical refraction horizon measurements to correct the apparent mis-calibration.    For those avid sea ice followers,  use buoy data,  whenever if ever available.   2012 surface temperatures should be compared with 2014 strictly with buoy data for greater precision.  WD June 16, 2014

I  still some doubt about about NCEP skin data vs air temperature during the period when snow and ice melts amongst open leads.  Considering Buoy data comparisons,  2014 data looks more reasonable with NCEP rather than 2012.  Buoy data should be prime and NCEP always useful but with the seasonal faults cited kept in mind.
Posted by EH2R at 2:25 AM