~Extreme warning of North Atlantic and Pacific part of,  or cause of ,  or part & cause of worldwide major climate shifts.

~  With some positive effects,  in part saving Arctic sea ice from utter decimation from the clouds they create.
~While negative consequences are documented in nearly daily extraordinary weather catastrophes 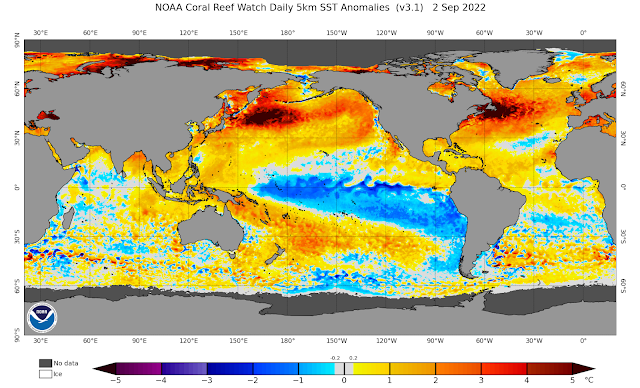 I believe that this recent NOAA sst anomaly map explains it all.  A powerful La-Nina has had a hard time forming,  Arctic sea ice has had a hard time melting more as it should and the major pressure position patterns of global circulation,  all got flummoxed,  thrown out the comprehension window,  because we are now literally in a new climate age.  The one with near permanent warmer ocean regions.   As expected by EH2r projection, Arctic sea ice melt was greater than last year,  but nowhere near 2012 all time low extent minima.  As expected the AI weather outlooks came through,  nice for a change,  except for more rain in some regions,  this can be easily explained by warmer ocean sea surface temperatures,  not so easy to describe their location causations,  near permanent hot zones,  in the past usually with greater degree of variances: 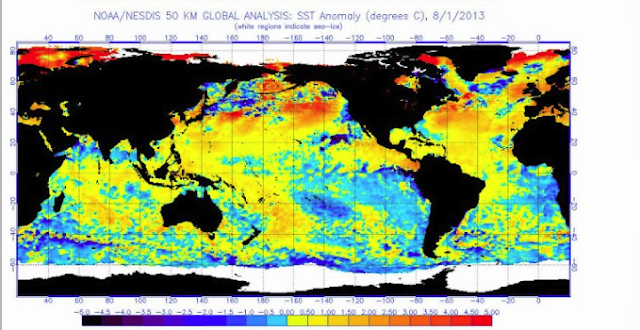 We remember variation of sea surface temperatures still during a recent warming time,  but in retrospect,  even in 2013 the emplacements of near permanent warming ocean regions were starting to be in place.
So now,  we must consider the new world weather order,  in the recent past, so much often eagerly denied by climate skeptics, surely presently not eating humble pie,  face saved by being in this age of many people choosing whom to believe,  rather than deciding or trying to find out what is really going on.  The images such as above,  need no rocket scientists to explain.  WD September 3,  2022