~Amazing unusual past winter observations, from beginning to end

~Wild variances in Arctic climate was the main feature

The objective of this exercise is to see how much I understand weather dynamics in relation to geophysical observations lasting throughout the High Arctic autumn,  the long night and spring.   If I understand what happened well, I might have a very good idea what will become later.

A rapid prognosis of past autumn and winter is essential,  strangely ENSO pattern appears regular since summer 2020: 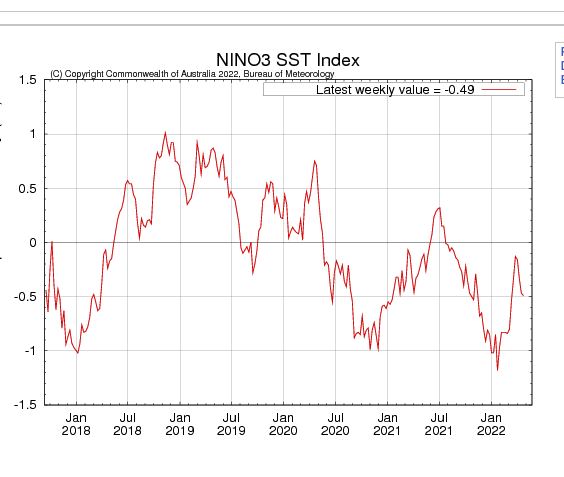 January 2021 mild La-Nina bottomed  likewise January 2022,  summer 21 was trending El-Nino but reversed course suddenly.  While from its peak warmth ENSO trended La-Nina just as fast as previous warming.  During that time in the Arctic ,  something very unusual happened,  it was very warm and more cloudy .  October 2021 was extremely, so much so ,  sea ice extent freeze-up rebound
stalled greatly. Like clockwork,  ENSO trended El'Nino similar to exact period in 2021,
and eerily similar La-Nina trend struck,  however this times  La-Nina trend was in part responsible  for a very dramatic Arctic cooling,  because of cloud scarcity.  Keep in mind that winter 2021-22 was trending very warm, with super high tropopause heights,  along with adiabatic lapse rates similar to summer weather. When
the clouds cleared by mid March,  the tropopause dropped in altitude by 5 Km!  With more normal adiabatic lapse rates..   This sudden change in course of winter  a key feature, because sun disks were bigger in February than at end of April.  Reflecting the turn of events further, the Cold Temperature North Pole appeared strong for the first time of winter over the Canadian Arctic Archipelago, long did it last over Northern Siberia till February  Not only did this CCA coldest vortice in the Northern Hemisphere became steady but had more pronounced features than past several years,  from 2018 throughout 2020 the CTNP over the CAA was strong,  this year had the most prominent features.
With this in mind,  it may seem difficult to project ahead,  but it isn't,  mainly because refraction observations, not seen since 2016,  the strongest El-Nino year in history,  was surpassed in sun disk sizes until  La-Nina trending went full swing.  Not only that,  First Melt under the sea ice,  a feature detected by refraction means,  was strong and consistent from early April onwards,  equally similar to same time 2016,   suggesting very thin ice twinned with a lesser thinner snow cover.
In essence 2022 projection should be very similar to 2021, if forgetting the late winter colder atmosphere, the incredible warm start of winter from clouds, so many unusual cloudy days , which of course implies warmer weather.  This is known,; there is a smaller intense cooling at Spring start,  this cooling should trigger sea ice melting ponds,  because of the clear skies,  implying very few clouds, also means a dramatic upswing in sea ice surface snow melting from mid May onwards.  This late in winter super organized CTNP vortice is not going away quickly.  But,  will drag heat and moisture from the real weather maker rivaling ENSO, the North Pacific warm temperature blob,  this cloud and rain maker or booster is seriously changing the North American summer Arctic ,  which has been experiencing rain like in temperate zones. Even if  the coming Pacific extra clouds help shade sea ice from  strong sun rays,   rain can devastate sea ice almost just as much.
Projections:

Circulation pattern largely like 2021  except 3 CTNP zones, major one  will hover over the Canadian Arctic Archipelago (Big C in purple).   Arctic Ocean basin High  pressure will last longer this year, because it exists from extreme cold conditions,  even if the CTNP is small in extent,  the Arctic Ocean Gyre driving anticyclone  is in a good place to last, because of weather dynamics.  The coldest air will be over the CAA until snow cover melts,  then,  a surprise awaits,  the permafrost didn't have a lot of cooling over the long night,  this means that sea ice will be the greater heat sink.    The Basin High will generate melting ponds likewise to 2008.

The modest La-Nina just past may have only added to the warming of the North Pacific blob in warm temperatures,  likewise it will help maintain a steady supply of rain to the NW Canadian Alaskan coast, especially clouds for the Canadian Arctic.   What is left of the Polar jet stream (in green) will eventually vanish for a while,  even when remnants of the jet is about, further Southwards weather will be stable in nature,  sluggish in movement,  prone to very hot in duration heat waves,  and  rainy periods for SE USA.  Emphasis on heat waves making the headlines  rather than rain though.   The Arctic Basin pressure system switchover,  although late,  will have a Cyclone loving cold ice, in the wake of a gyre driving anticyclone.  This cyclone favors less dumping of sea ice towards the Atlantic, but sea ice damage was already done, flushed out to Atlantic by the Gyre anticyclone lasting much longer than usual, also it helped adding thousands of extra ice surface water puddles,  making sea ice very vulnerable even if this steady in place cyclone shields most sun rays.    Like 2021,  the CTNP will hover at the North Pole , while Siberia will bake strongly again.  Swift changing weather pattern of NW Europe , will also slow to  crawl  as was summer 2021.  Not as fast moving weather systems, may be detrimental depending on what it does,  like extensive rainy periods causing damage.

The return of a bit of a Polar jet stream will come as the sun lowers to elevations not so warming,  the Cold Anticyclone will be nearer Greenland as to hug what sea ice remains.  Siberian Cold Temperature North Pole will faintly appear, along with North Greenland and Ellesmere Island cold temperature vortice.  Note the vortices help form the north Pole anticyclone.  while this North Pole High grows,  a North Atlantic High will extend Southwards,  making the East North American coast vulnerable to hurricanes.  Most of sea ice will appear to melt suddenly  later than usual,  and the rebound freeze up will be very sluggish. 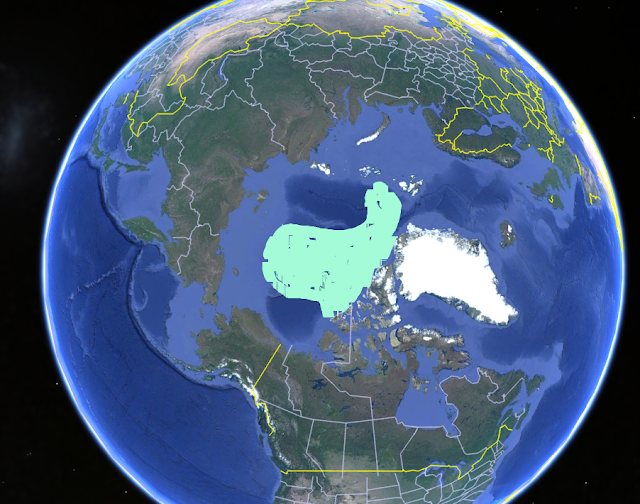 Estimated sea ice extent at minima,  sort of a mix result similar to 2007 and 2016.  The areas away from the steady hovering  mid summer gyre cyclone will suffer great ice loss especially North of central Siberia and North of Beaufort sea.  Due to earlier puddles and hot air advection from continental heat waves. Unlike  2021 Minima,  I'd expect more melting close to 2012 record,  primarily because Arctic lands will warm faster this year especially on the Canadian side of the Pole. WD May 1, 2022.
Posted by EH2R at 4:51 AM