A Rogue extremely cold Vortice just flew by, an example of the new winter look for decades to come

~Winter may be officially over,  but it said final goodbye in NE USA on March 28

~It was a Rogue Vortice,  very cold Cold Temperature North Pole  cut off from the Polar Vortex

~Expect more of these more often for many winters to come

The geometry of winter has changed,  it has become thinner,  not bloated by darkness as it use to be.  In effect, winter still rages but for smaller areas, when so

the  vastly larger stable warmer air deepens the Cold Temperature North Pole(s),  not often at the North Pole,  but wherever it may be.  Sometimes very surprisingly, like a few days ago  as on March 28 over Michigan USA,  suffering again a cold blitz,  something special makes it there,  perhaps it’s the location tip of the elongated end of the Polar Vortex,  stretched out with favorable cooling weather  twinned with some cold air advection.  At any rate, being in late March,  such a low latitude CTNP has no chance of living long,  as it did so.

However the geometry is of interest:

If you look carefully at State of  Michigan a cold zone formed by itself on the 26 of March.
It soon joined the elongated Polar Vortex rapidly in a day,  there was a -31 C  700 mb temperature recorded there on the 28th.  NOAA daily composite does not show this because this -30 C 600 mb area was so small.   This rogue vortex moved rapidly North East and vanished afterwards.  Cold air can form as cold as the Arctic in temperate zones,  it depends on the weather.
The vast expanse of a fierce winter does not tend to create Rogue Vortices: 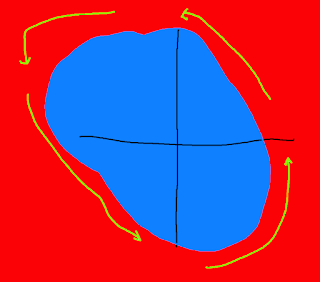 The jet stream (green) does not shear away and create a rogue vortice while the Polar Vortex is intensely very wide and cold (blue).   That was occurring more often than not during not so long ago winters.   When it got cold, it stayed that way for prolonged periods.  Those were the days. 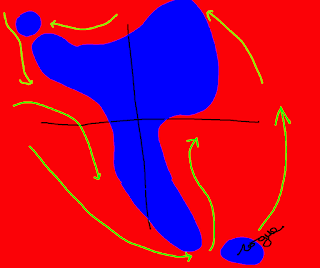 Recent winters were mostly warmer, not withstanding occasional periods of extreme cold weather.
Although never lasting long, characterized with hit and run blizzards followed by a lot of snow melting not long afterwards.   Geometry explains this,  a rogue vortice is easily created by narrower cold areas,  the jet stream bends along a lot more with the smaller collapsing in size state of winter.  Rogues have already shocked many people use to milder winter,  easily forgetting it was so until  a rogue hits their land.  The intensity of cold atmosphere  is related to how much stable time the low in altitude winter sun can not warm cloudless areas forcibly loosing long wave radiation,  heat to space.   The amorphous Polar Vortex as shown just above,   tends to cause circulation stalls as well, increasing the chance of one region loosing radiation to space continuously for weeks.  Hence strange reports of intense -40 C weather lasting long despite warmer weather everywhere else.  WD April 3,2022