~ESA great capture of trapped in a crater ice infers a lot of water on Mars
~The trap is a cooled atmospheric interface,   much similar to what sea ice does
~No sea ice,  none or far weaker inversions,  less sea ice possible as a result 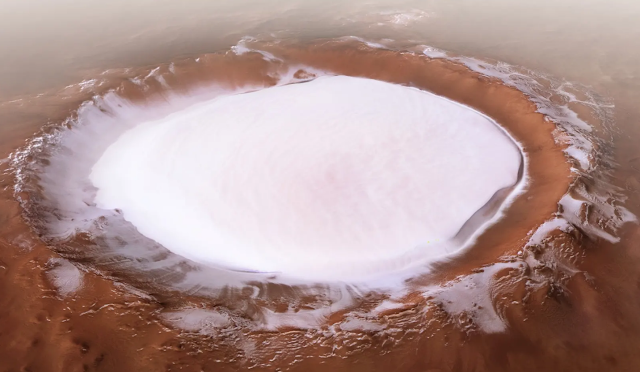 ESA composite picture of a Mars North Pole crater called Korolev,  has amazingly similar sea ice features on Earth, likely there is snow as well.  But the greatest feature,  the reason why there is frozen water  in the North Polar Martian region,  is exactly the same as the over abundance of ice near Earth Poles:  inversions.   Remove the inversion,  and massive sublimation occurs,  because there is an inversion,  the moisture in air is trapped within a shallow layer,  reducing the possibility of sublimation especially if the atmosphere is near 100% saturated with water vapor.    Korolev crater gives the impression that there is a great deal of water in Martian underground.   But this moisture has very little chance of staying within an atmosphere 95% CO2.   We can see here something equally similar to the disappearance of glaciers on Earths polar regions: 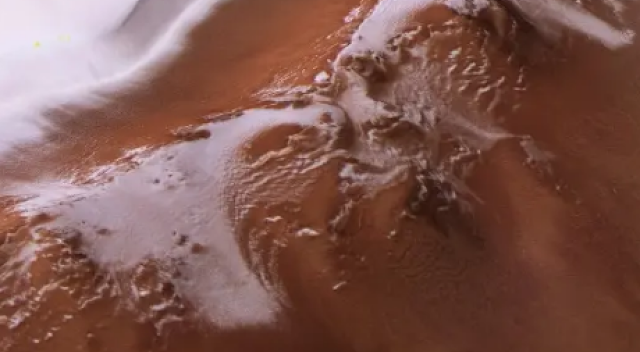 We can see here evidence of recently evaporated/sublimated smaller snow glaciers by the lighter soil colors,   Mars soil is mainly oxidized red,  suggesting rust,  small glaciers remove contact with the atmosphere, after time they likely strip the top rust by small calving process,  but once the small glacier evaporates/sublimates,  it leaves behind its imprint.  Arctic rock strewn lands having small glaciers exhibit exactly the same feature,  except Arctic small glaciers are disappearing very rapidly,  they leave behind a lighter rock surface color for much shorter time periods ,  unlike Mars .13% oxygen content,  Earth's atmosphere is rich in  Oxygen.    Further evidence of snow on top of ice can be seen here: 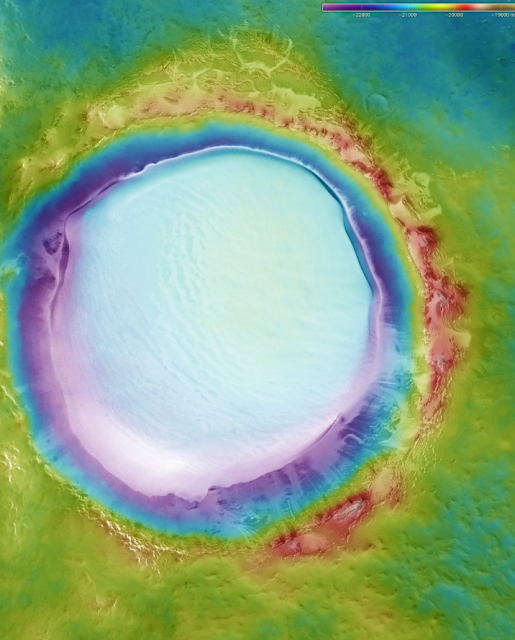 Snow or ice crystal drifts can be seen in this ESA's Mars Express topographic image.
Within the thin inversion ice crystals likely fall back to the surface and sublimate upwards in an endless process similarly within a closed climatic system,  over a long period of time falling ice crystals may gather high insulating the ice further.   WD December 25, 2018