Illusions and implications of a deeper Arctic snow layer

~Arctic surface snow depth turns out to be a very complex issue.

The very powerful  El-Nino 2016 almost peaked at Christmas 2015,  therefore according to
the cloud seeding theory,  the Arctic was covered with clouds during the long night,  and so it was,  not only cloudy but snowy,   in particular during October and November (El-Nino Maximum temp anomaly).

Snowfall was great,  in some places multiple times the monthly average record.  Ironically,  ENSO driven heat causation making more snowfall  created more sea ice extent than it would of otherwise.  Snow spreads to open sea water either from sky or drifts, as it floats just below the sea surface, it doesn't melt  since sea water is usually -1.8 C.   This floating snow enables ice to form more quickly.  Immersed snow is usually much colder than -2 C during Arctic winter.

However if greater snow layer covers sea ice,  the snow insulates direct contact of air to ice,  the more insulation there is,   the less heat loss of sea water,  accretion slows a great deal more.

In one case,  snow helps create sea ice,  in the other,   it slows the build up of sea ice thickness.

Complexities continue especially in the spring time when the sun reappears after the long night.
After long night less ice fabrication because of greater snow insulation,  the opposite occurs,  the sun doesn't warm  the ice just as much as it could with a lesser more Arctic normal snow layer.   A melt stall occurs,  and this has just happened.  The latest maximum sea ice extent appears flat: 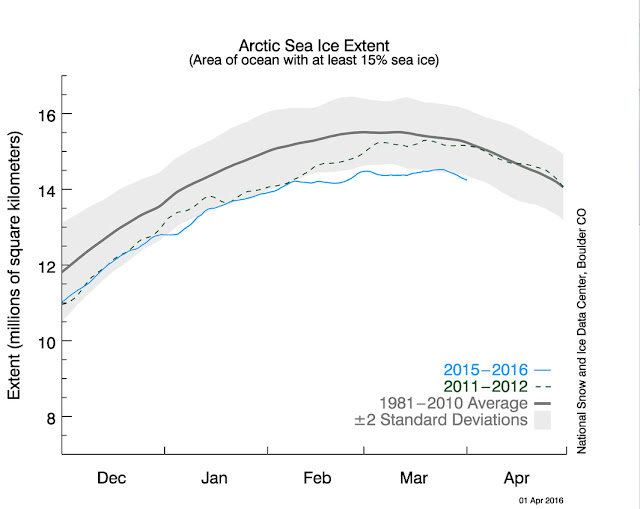 There is also lesser melting of the thinner in ice blackish leads even with a full forced "big blue"
event outgoing at this time.  Arctic big blue occurs when there is hardly any clouds for months,  this usually happens when ENSO trends towards La-Nina. 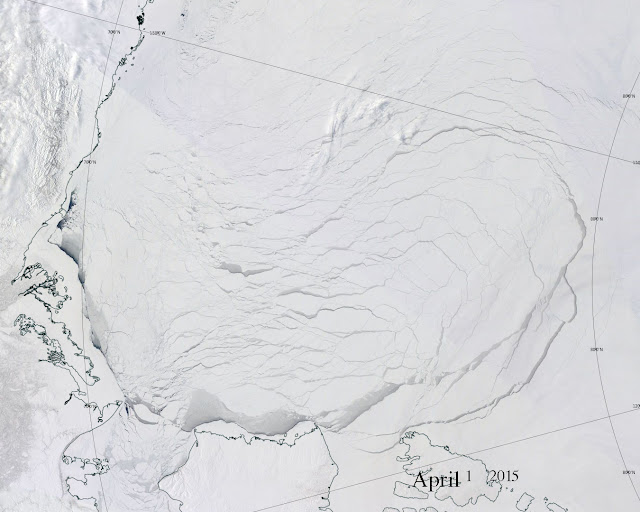 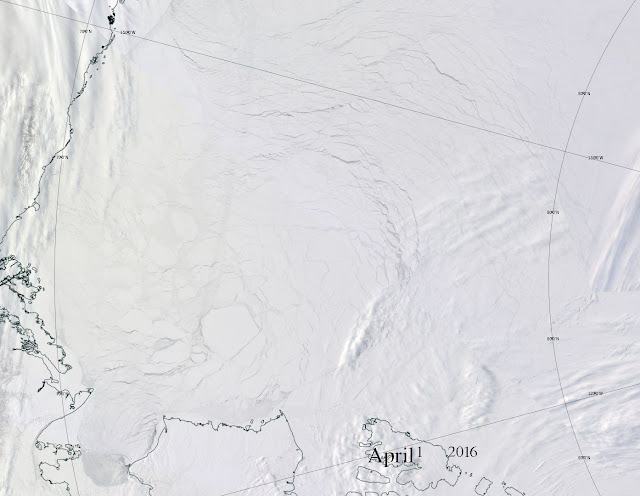 Although 2014-15 was a warm winter,  this satellite photo of April 1, 2016 appears to suggest that the winter of 2015-16 was colder.  But it wasn't.  The illusion of less broken sea ice was done curtesy  of greater snowfall and winds drifting  snow on the sea ice more evenly.

There are more features to the sea ice greater snow layer.  Refraction wise,  the horizon appears
usually higher at local apparent noon,  but lower in the evening on most occasions.   Sun rays
are not getting through to the ice as with a normal snow cover,  and this affects the entire surface to air interface thermal physics of the Arctic with significantly more snow.

Although there appears to be no graph available for snow on top of sea ice,  this page here displays great snow cover anomalies on land next to the Arctic Ocean.