Summer early winter 2014 Refraction and by other means Projection

Here it is ,  the much anticipated (for those who know) howitzer of weather prediction,
the invulnerable replication of the state of the ARCTIC atmosphere when it is suppose to be at its coldest.    Refraction vertical sun disk diameters have the uncanny ability to project Global Temperatures almost always accurately.  Last year's projection #3 warmest is up in the air because NOAA and NASA contradicted each other on the actual result.

Looking ahead: March 2014 was the warmest in history for the Northern Hemisphere so says NASA:

But the Arctic was warmest especially Siberia:

While you may be having breakfast in New England,  or by the Great Lakes,  and swear its never been colder.  The rest of the world literally baked.   Note: the coldest spot on the Planet was at times not in the Arctic but over Sub-Arctic Quebec.

Many Vertical  Sun disk measurements were taken during this period.  All revealed a duality,  it was very cold near the surface and very warm in the higher atmosphere. In fact,  there was  1 level out of 70 of sun disk measurement average which was found to be greatly expanded, that is from -1.0  to +6.0 degrees astronomical elevation,  as opposed to 11 all time maxima expansions out of 40 levels from 7.0 to 10.9 degrees.

This means that the Coldest atmospheric zone is largely surface based,  not influenced by a much colder Stratosphere.  This implies a weaker North American tornado season,  in the one part because the ground air is colder,  in the other the much required colder stratosphere is absent:

NOAA   Upper Air Data is largely confirmed by the incredible lack of expanded vertical sun disks below 7 degrees of elevation during March and April 2014.

Vertical sun disk dimensions expand with a warmer atmosphere and contract with a colder one.  Even more so near the surface when inversions are steeper and more prominent when the surface ground or ice is colder.

What is the score?  From 390 refraction observation comparisons with previous seasons 2002-2013:

of 110 decimal elevation degree levels, 2005 had the most expanded sun disk levels followed closely by 2014-2013 and 2010.  The warmest sun disk expansions in Arctic recent history (from 2002 to 2014)  all occurred during the last 5 years at 61%, compared to the previous 8 years.    If the whole Northern Hemisphere temperature remained average from year to year the yearly mean would be about 7.7%.


Where will be this Summer's Cold Temperature North Pole?
The  C.T.N.P.  zone is actually the biggest single contributor of weather throughout the Northern Hemisphere, it is the heart of the Polar Vortex.   There is CTSP in the Southern Hemishere which does likewise.  As in March 2014 the CTNP was hanging a lot about mid central Quebec,  and gave all kinds of "normal winter of old" weather.  For the folks in NW Europe a summer CTNP at about  Spitsbergen gives buckets of rain especially over the British Isles.     But it seems likely the CTNP to hang about Northern Ellesmere and Greenland, because greater sea ice thickness over Arctic Ocean Basin has been and will continue to help spawn High Pressure systems there.  CTNP over Northern Ellesmere should mainly position the jet stream to the Northwards between Iceland and Ireland.   Although it looks like the rain will return to UK like the summer of 2012,  perhaps less than but certainly plenty grey and wet.  For the shivering Northeastern Americans,  a nice very hot summer awaits,  drier after a wet cool spring.    But it is actually the position of the CTNP which will decide where the jet stream will meander.  An Arctic Dipole will melt the sea ice greater than 2012, the North Pole will see open water,  again like in 2013 when the North Pole was actually a zone of  very loose pack ice,    but this time the sea ice will compress or compact,  leaving a wide open water view of a Pole area not exposed to open water for millennia.

Last year saw the most violent typhoon in history,  Haiyan.   Last year also had no El-Nino as well as no Hurricane season to speak of,  but there was a split personality syndrome;  El-Nino to the North , La-Nina South of equator,  this continues today:

Except there is a difference,  the Polar Vortex has shown a dissimilar circulation pattern to last year,  so expect a different result.  The PDO especially from the North Pacific warming is 1.6 points higher.   ENSO variations triggers weather but weather patterns affect ENSO moods. 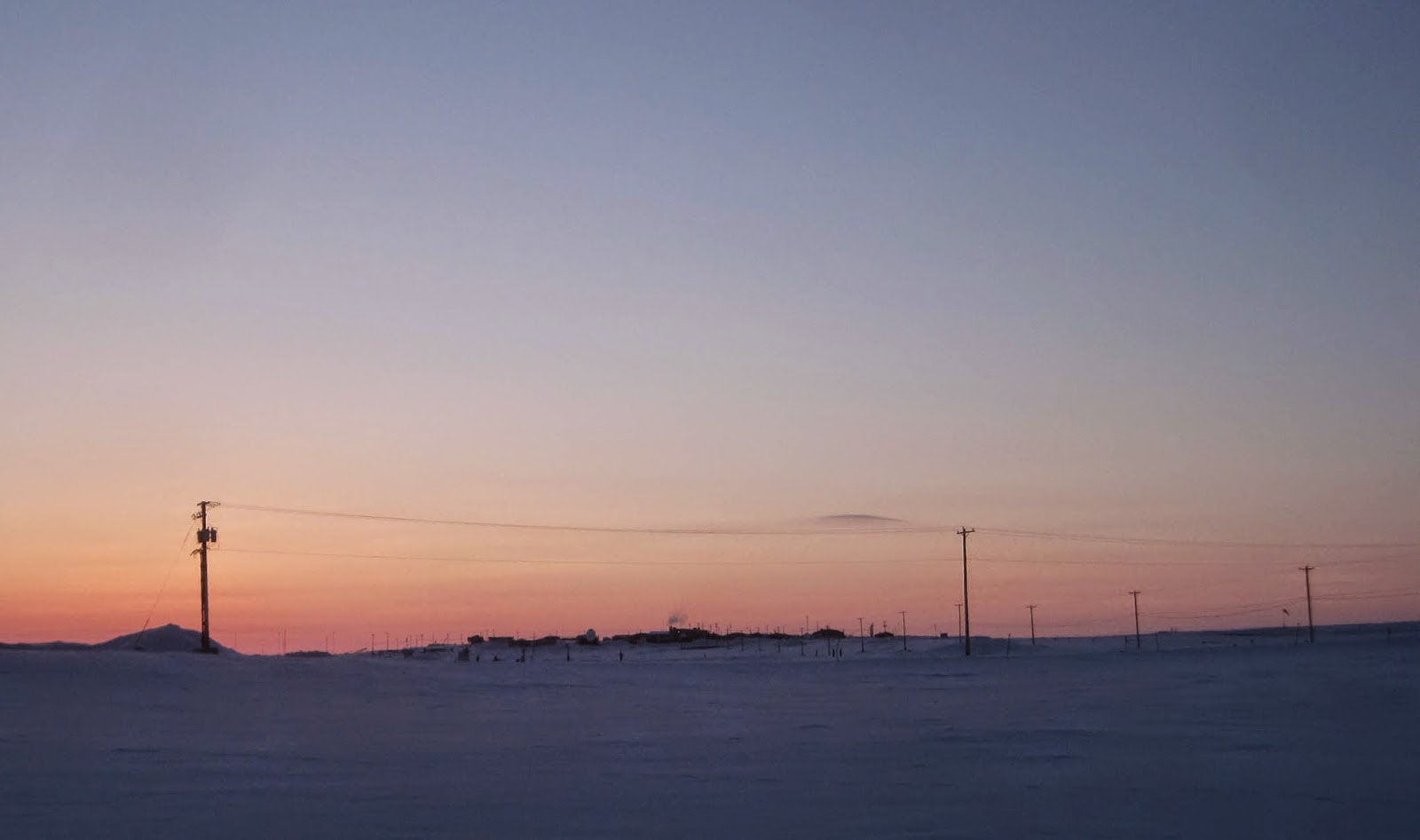 April 19, 2014 Polar Tropopause clouds,  higher than Cirrus some appear white some dark,   these are reflections from horizontally Polarized light,  they are a wild mix of chemical clouds, ice crystals and cloud condensation nuclei.  If they exist higher in the sky during twilight the more likely El_Nino is happening.  Right now, at about 7 degrees above the horizon they exist more from a very warm North Pacific and Atlantic,  during an El-Nino they can cover the horizon sky for more than 40 degrees elevation.

Already in the cards,  more typhoons,  less hurricanes than normal.   If ENSO turns to be a completely formed El-Nino,   the coming winter will be much warmer grey and wetter (yes lots of rain and snow),  if the spilt personality continues (unlikely),   a winter much like the one just past will revisit but with  different CTNP persistent position,.  WDApril 20-21, 2014.
Posted by EH2R at 2:43 PM