Here is a sketch I done last week describing the rough outline from our current Polar Vortex: 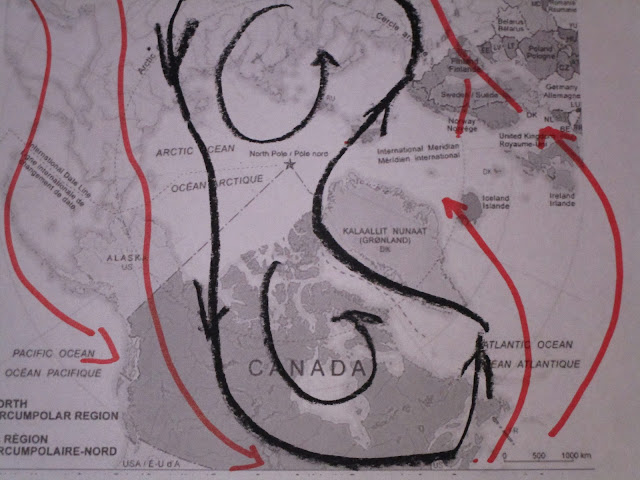 About 10 days like this, 2 vortices within the P Vortex,  with Novaya Zemlya one being at unusual location compared to several past years.  The main thinning area was of course by the very warmer North Pacific and Atlantic thinning  the width of P.V. of the Arctic Ocean.  This easily explains the jet stream cooling the Western Midwest of North America.  However being stretched thin,  the P.V. extreme Southern locations  were susceptible to create rogue vortices ,  and they have a few days ago,  where as the extreme Southern points of elongation were the coldest just recently.

This is the newest way of which climate change expresses itself:
CMC 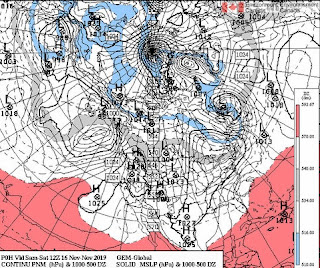 In fact the 2 coldest 700 mb points were within vortices near Maine USA and Northern Japan November 16 12 z 2019.  These were quickly vanishing remnants of very cold rogue vortices,  we can see them here about to die off moving Eastwards to the Pacific and Atlantic.

With new ways comes new circulations,  an astounding cyclone was observed moving well past its usual dying spot:  the Baffin Bay cyclone cemetery,  moving all the way to the North Pole:

And appearing to Merge with the Vortex surely to warm it with ease.    The interesting bit is its passage throughout Western Greenland,  this Low survived the ride Northwards meaning it was pushed relatively rapidly and also kept warm or got stronger by Baffin Bay wide open water.  Another view of this is with a surface analysis loop: