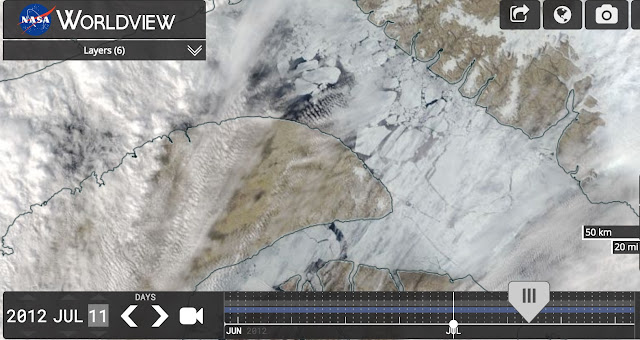 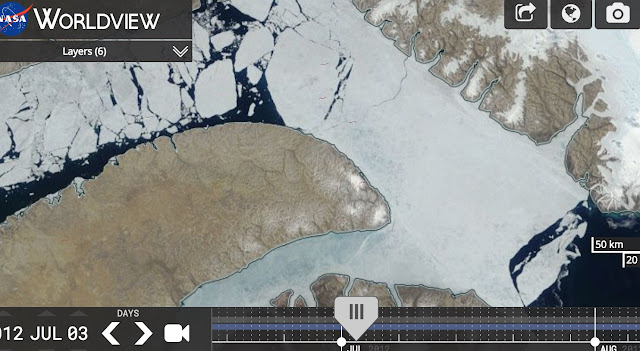 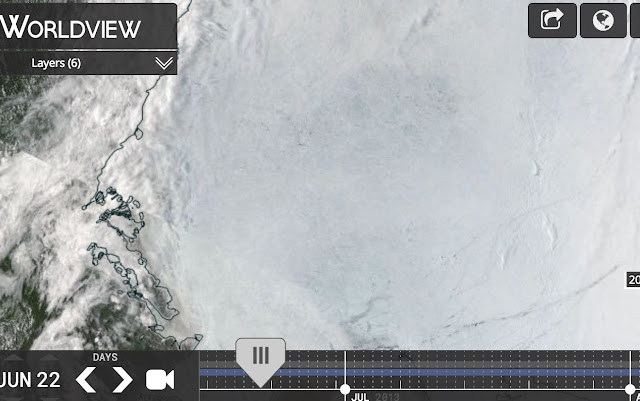 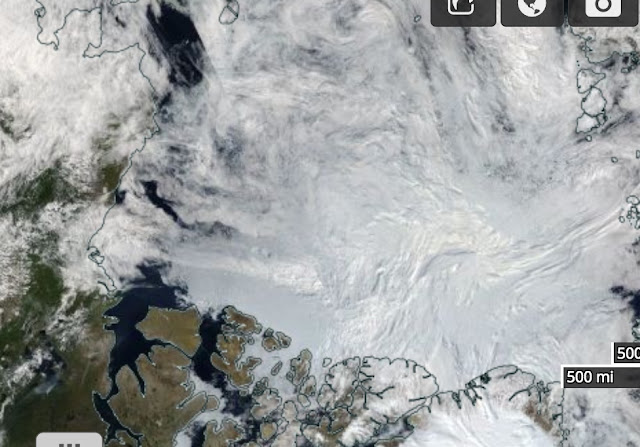 Peak 2018 Gyre sea ice speed before switchover was extremely bad for sea ice,  it slowed to a third  next 7 days because of Cyclonic presence over the Arctic Ocean Gyre,  still very impressive velocity,  25 % less than 2012 during the same period,  it means that when the cyclones weaken or disappear the speeds would rival or exceed 2012 again,  implying a similar 2012 melt is in the cards.  WD June 18 2018
Posted by EH2R at 11:56 AM No comments: 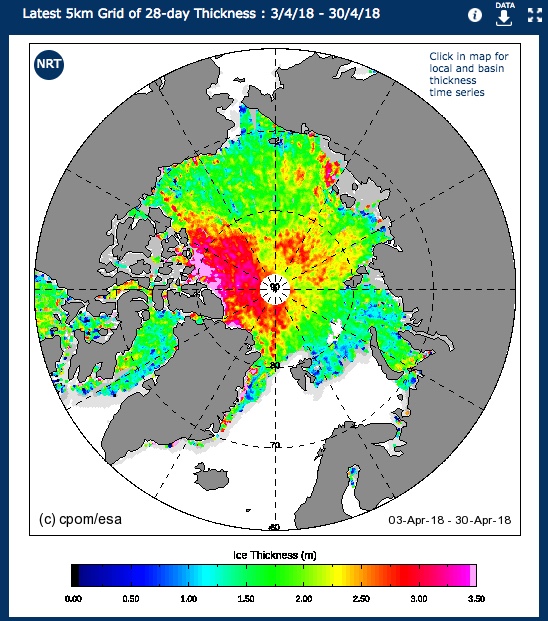 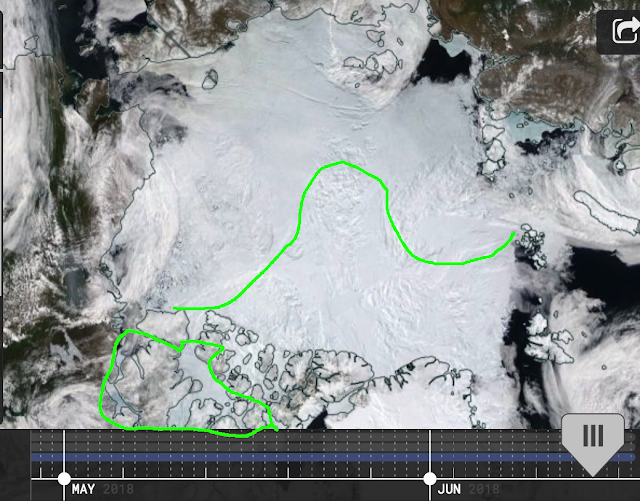 ~Whether viewed close by  or from space,  sometimes thin sea ice looks much thicker

Kara sea ice is disintegrating rapidly not only because the sun is melting it like crazy, but rather a mix of ripe conditions,  namely its ice is  mostly very thin,  especially with a lot of snow on it,  but winds and current were not able to blow it away until today,  so thin ice is not as fragile as thought and can easily be broken all at once, not especially detectable from close or afar,  even from space, especially with snow layers .    Only Inuit hunters are best at detecting, because there is a hundred words for snow in Inuktitut the language of the Arctic, snow surface structures may define what it covers.  (NASA EOSDIS June 1-8 2018).

Other side of the Pole in the Canadian Arctic Archipelago,  April 2 to 9 2018,  a massive chunk of ice disintegrated at the entrance of the Northwest passage, Lancaster Sound,   quite unusual to see Lancaster filled with apparently solid sea ice,  a few times in the past ,  during the coldest years it did so,  the last severe Lancaster Sound full coverage had thicker sea ice surviving till mid July 1987.    2018 is not 1987,  has illusions of such,  February March 2018 had very cold favorable for rapid new sea ice formation,  I estimate most of Lancaster sea ice to be lesser than 80 cm though  ,  there is a lot of snow on it,  giving the impression of thick sea ice,  this snow reduced accretion. But here is the illusion which will unravel when the structure of compacted hard snow gets pummelled by warm sublimation and under snow melting,  along with tidal and winds severe stresses,  large chunks of Lancaster ice will disappear in a matter of a few days.  Cohesion of thin sea ice is remarkable,  but ultimately fails in apparent massive extent events.

There is also the illusion of sea ice extent itself,  we note 2012 amongst this 2010-2018 June 9 animation,  2012 the year having the greatest melt on record,  had on its June 9  the most Lancaster Sound sea ice of all.    It is important to judge sea ice with a context of complications, all encompassing measures,  winds, tides, current,  momentum,  lead structures, architectural layouts , snow cover and temperatures must be considered.   If for instance Kara sea South of Novaya Zemlya Island has persistent winds compacting thinner sea ice in its pocket,  its ice would appear thick till favorable conditions would vanish it out of existence.  This disintegration rapidity factor must be considered chunk by massive chunk,  although some parts of ice survives does not mean its adjoining ice is different.    One main reason why thinner sea ice may survive longer is that it is smooth on top, the winds glide over with lesser friction. WD June 13, 2018
Posted by EH2R at 12:24 PM No comments: 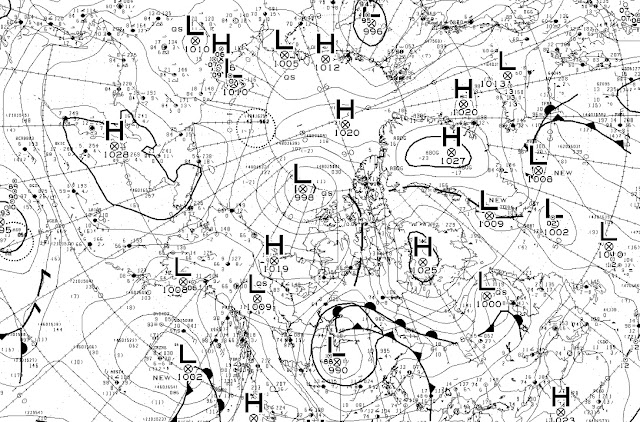 CMC June 12 2018,  with a High now over Baffin and a low over the Arctic Ocean Gyre,    in between is the CTNP vortex,   the pressure scene has SWITCHED ,  offering some hope for sea ice with extra cloud cover. 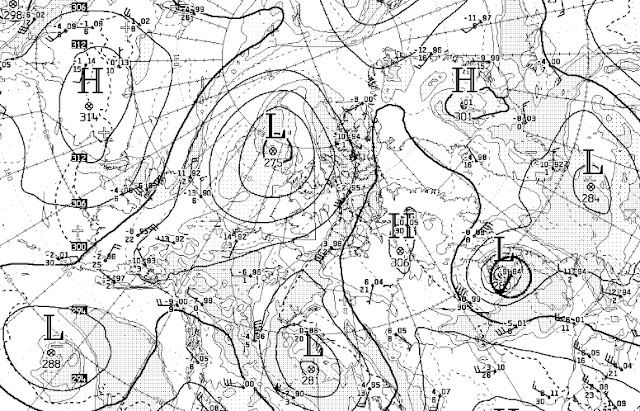 What separates the High from the Low is a cold upper air zone not measured in a significant density  grid manner.  700 mb temperature and pressure heights CMC June 12, 2018 1200 UTC.

What remains is the possibility of an Arctic Dipole,  which is a rare event at this time of great melting.      The possibility is there but requires a High over Alaska which may venture North. Mean time we must judge how fragile sea ice is by its velocity: 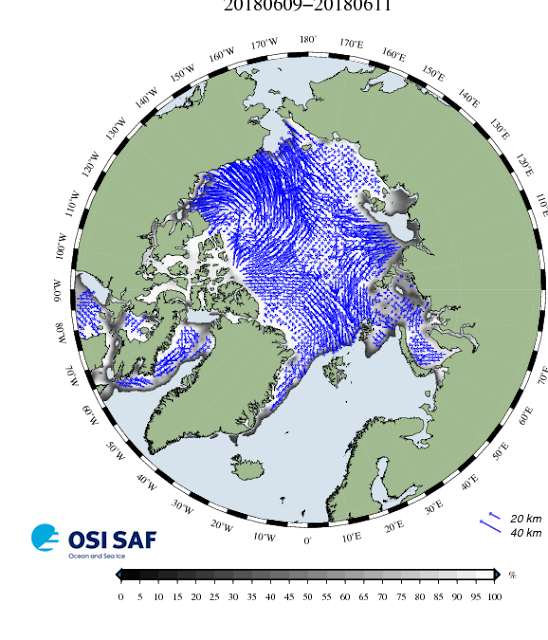 Impressive speeds of sea ice drift makes for a great melt,  it is fortunately the source of open water.  Fog and cloud source at near 0 C temperatures.    WD June 12, 2018 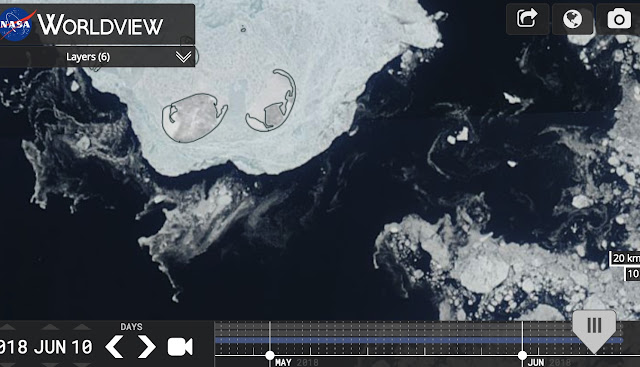 Kara sea next to  Russia shore has lost a lot of sea ice,  with remaining having greenish colours indicating melt ponds..  Note the 'goodbye waves' in the dark sea,  precursor sea ice just about to completely melt and merge with sea water. 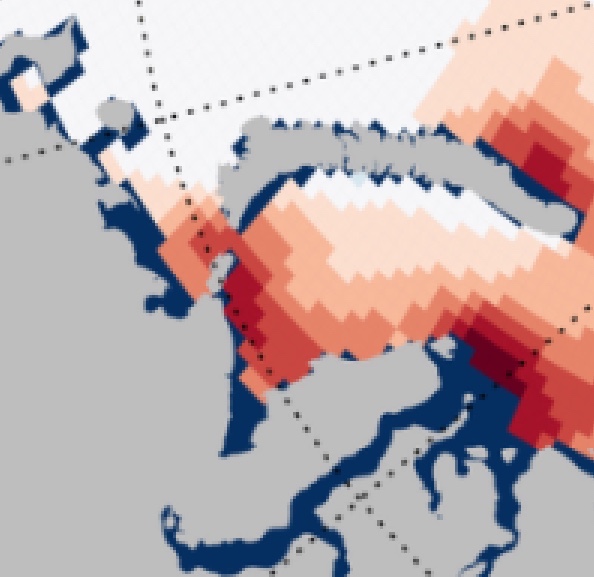 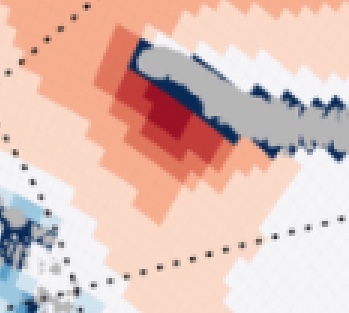 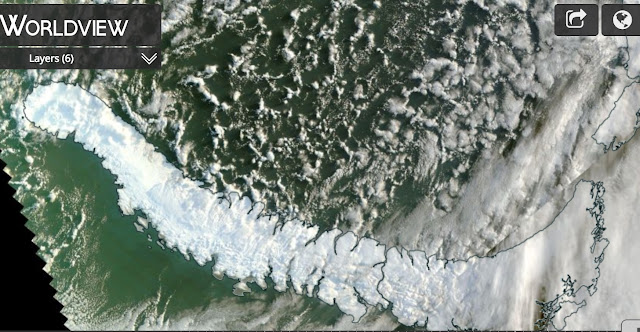 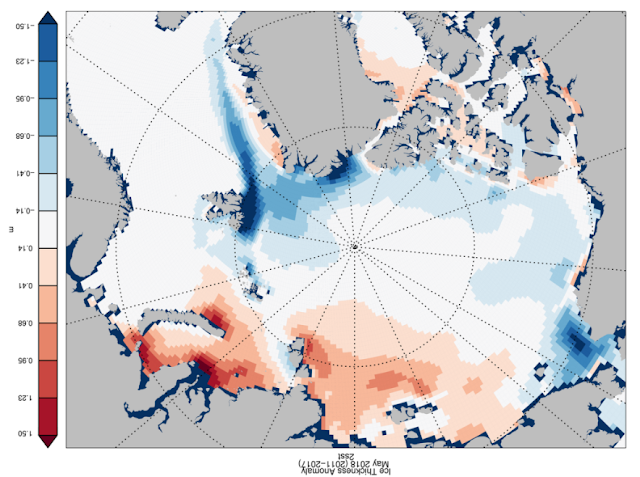 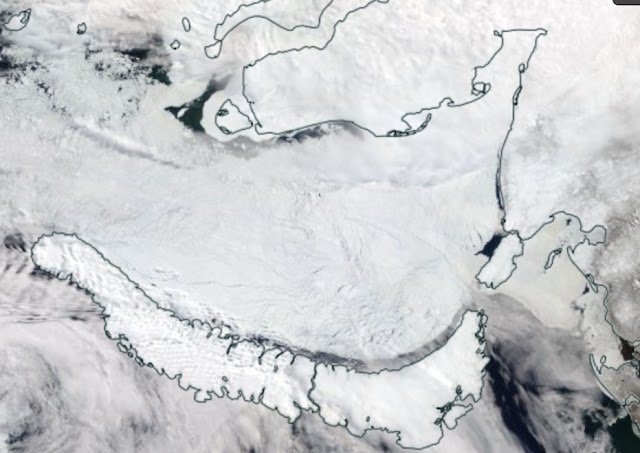 ~  Is there any wonder why sea ice is in dire shape after more than a month of Gyre reinforcing steady anticyclone?

2018 Pacific region #1 receded sea ice very significant given solar
forcing on the much darker already very warmed because of less winter sea ice Bering Sea.  In retrospect 2013 was a very interesting year,  despite a constant cyclone over the gyre area,  this current still turned clockwise.

No matter what will happen,  although I have a very good projection of what will occur, the very greatly enhanced Arctic Ocean gyre current will devastate sea ice by compaction till sea ice minima comes.  wd,  June 6 2018