~The root cause,  of course, was a warmer Arctic,  with likewise much smaller size Polar Vortex

We go strait to the root cause:

The size of the Polar Vortex on December 25-26  may be defined at 248 K isotherm threshold at level 600 mb.   As you can see the vortex is spectacularly small and covers even less ground over North America.    It has 3 vortices,  all quite cold, as per latest observations, the warmer the Arctic gets the more prone for small but very cold PV vortices.  Obviously there is no or very little circulation originating from the entire sub Arctic towards North America and western Eurasia.  How did it get this way?

This was from a build up of unusual Arctic circulation pattern  covered here at EH2r since late November.     Namely by cyclones heading North from the West side of Greenland.
Here was one of the last significant warm air blitz:

The recent Polar Vortex was not always shrunken,  December 19 to 25 action demonstrates one of the latest warm cyclones bringing up air from the West coast of Greenland,  all the way to Northern Siberia by way of the North Pole.  The culprit here is the Western Canadian Arctic CTNP (Cold Temperature North Pole),  a vortice of the vortices within the Polar Vortex.  Like a hurricane eye,  this vortice has been reorganizing according to the massive warm advection,  it could only reposition itself westwards,  within a much warmed,  hence shrunken PV as seen on my first NOAA daily composite animation presented above.    This shape of the Polar Vortex took place after several Baffin Bay cyclones headed Northwards likewise.  The sum total is a shrunken PV,  reorganized in similar way as before,  with a CTNP always prone in injecting more warm air in addition to the usual North Pole warming route,  from the North Atlantic.   Of particular interest is the weather of Japan, which will likely vary greatly from rainy warm days to Siberian cold in the matter of a few hours,   I have yet seen something which will break the current circulation pattern,  it seems quite stable,  but thinner sea ice may eventually reshape PV dynamics within 2 weeks. WD December 29,  2019

We can see the brief outline of the North American CTNP over the Western Canadian Arctic Archipelago, NOAA CMC IR captures,   December 20 and 22.  Everything turns counter clockwise around it,  storms,  clouds and cyclones.  Which brings Northwards Pacific moisture to meet with North of Greenland Atlantic clouds very near the North Pole.  This CTNP has been severely weakened in a day,  the subject of coming next article.  WD December 22 , 2019
Posted by EH2R at 5:03 AM No comments:

~Dawn of winter 2019 looks as extreme as ever
~The coldest zone at start of winter since 2012 was 2016
~Yes,  the warmest year in history twinned with greatest El-Nino

The way to show this is by taking the ENSO cloud seeding theory,  which means there are more clouds during El-Ninos worldwide, either in summer or winter.   More clouds in Arctic winter definitely turns it warmer,  so was the great El-Nino of 1998 the turning point for Arctic sea ice extent , the beginning of its significant declining trend.    The  feedback of yearly ever increasing lesser sea ice areas should not be underestimated,  must remind: long in duration La-Nina's are destructive for sea ice, especially since 1999,  sea ice also plays a major role in world wide climate at either Poles.

NOAA ENSO sst graph directly suggests the world is warming markedly because La-Nina's rebound from 2016 warmest El-Nino did not happen!  Hence cloudier Arctic summers since 2012.  But looking at peak warm/cold years reveals not only sea ice trends, but Global Circulation (GC) trends.  Obviously there wasn't the same mass of sea ice to counter 2016's warming.  2007 and 2012 summer sea ice historical all time melts were La-Nina driven,   not really counter intuitive because less clouds in summer Arctic spelt doom for robust very thick sea ice.  At any rate we look at warm years El-Nino 1998, 2003, 2010 and 2016, and cold La-Nina years 1999, 2007, 2011 and 2017.

Note, declining sea ice mangles ENSO's global circulation role year by year as sea ice volume and extent vanishes, it gives quite the interesting start of winter GC look,  note a couple of days at the dawn of winter are very significant if looked holistically,  a wide expanse of planet Earth is in effect an average compared with identical same day periods, long term averaging dilutes the GC outlines :


Consider the extent of Polar Vortex within the orange zone (the jet stream line), astounding as you may notice,  600 mb temperatures are very close to the weighted temperatures of the entire troposphere, but the coldest temperatures measured at beginning of winter were mostly during the warmest years, especially 2016, the warmest year.  Warmest years December 13-14's had much smaller jet stream outline (-25 C,  248 Kelvin border), colder years had naturally a vaster expanse of colder air but,  this is a big but,  mainly much warmer internal vortices.   Warmer years had mainly top of sea ice great warming incursions,   Cold Temperature North Poles (CTNP) were closer to the North Pole during colder years.

The easy question is:  what causes this?  Refraction observations of vertical sun disk expansions or compressions have confirmed this phenomena.  During the last two springs, 2019 and 18,  the Canadian Arctic Archipelago Vortice (english language needs adjust to the times) was found radically colder but smaller.    Dark season long term observations rendered tentative conclusions,  the Cold Temperatures North Poles have largely migrated Southwards, away from lesser and thinner sea ice,  snow on ground species have tended to be more of the "wet" snow type,  more sublimation and mostly there seems to be a tendency for more stable but smaller cloud free zones,  which tend to be in a deep freeze feedback loop. 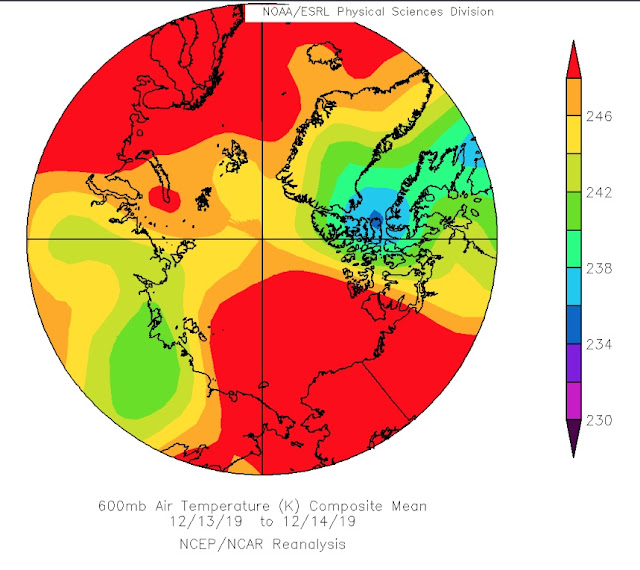 Same days dawn of winter look:  a vast tropospheric expanse over  the Arctic Ocean is warmer, the CTNP's are to the South,  meaning?  Rogue vortice formations much within populated areas, wild weather, warm to deep freeze merry go round all winter.  WD December 16, 2019

~Refraction method observed in the Arctic revealed an important facet with respect to after snowfall surface temperatures.
~The method confirms that T*** top of snow temperature is colder when the snow layer snowflakes are larger.
~ This lingered well afterwards even when the clouds persisted,  a quite specific and peculiar key observation
~In this situation of bigger snowflakes within the carpet, when the clouds clear even a little,  surface temperatures dropped really fast, only to warm quickly as soon as cloudier not necessarily overcast conditions returned.

During the Arctic long night we have the luxury of darkness eliminating sun ray heat effects.  After a period of  unusually large snow flakes we can literally precisely measure if different flakes cause temperature variations. Unlike snow beds in sunnier climes,   most flakes remain buried in place for the duration of winter,  as long as from October till June.  When the precipitation occurred,   Resolute Bay  October 2019 was likely the warmest in history,  it was mainly extensively cloudy and so with clouds there was very little chance for the  usual cooling clear skies triggering the start of winter.  Hence,  beginning of October had a lot of snow usually called "wet",  they  create a weaker density layer, compact less in the winds as can ice crystals or very small "colder" snowflakes do.   After weeks on ground, they are only readily identifiable by walking over the snow pack, causing while walking intense sinking with every step.   Measuring T*** with high precision thermistor revealed a marked cooling as compared with previous years.  Onto itself this cooling can affect the local refraction horizon and it did:

To sum it up,  the greater the positive temperature difference between Ts and T*** ,  the stronger the refraction,  observed by the horizon mainly appearing higher.  In other words,  a "wetter" snow bed causes more sublimation,  hence steeper cooling at the interface between snow and air.   Remember this sublimation cooling occurred in the Arctic long night, no sun, solar rays would exacerbate the sublimation,  which infers much more cooling.     The temperatures taken, with respect to the graph above were done nearly simultaneously with the refraction observations.  This is important, these temperatures are not daily averages,  which would require 24 near simultaneous refraction observations.

A very difficult observation is to contrast top of drift snow pack (left) with 30 cm below (right).  The  bottom snow layers are much less dense.   But appear the same in a cross section scope,  however placed on a slab with 5X magnification the top layer primarily appears as  ice crystals while
the bottom "wet" snow in origin semi compacted has fewer ice crystals.  Yet the best way
to judge the differing layers is to simply walk on snow, usually a well compacted snow carpet leaves a very shallow footprint as opposed to a less dense one,  the former is like walking on concrete,  the latter causes difficulty in walking.  WD December  8 2019.
Posted by EH2R at 7:34 PM No comments: