~2021 spring summer weather will of course be different in many locations.

At present, the great Canadian Archipelago Spring CTNP (coldest vortice) has a hard time establishing itself, largely because there has been a constant streaming of North Pacific warm cyclones destroying its formation,  on every 2 or 3 days of build up this vortice gets banged up by cyclonic heat advection.  As a result Siberia has dominated as CTNP prime region,  shifting the entire circulation picture of North America,  from mainly cold to much warmer:

NOAA daily composite March 1 to 17 picture at 600 mb temperature,  roughly the weighted temperature of the entire troposphere,  has morphed from, 1977;  when the North Pole was CTNP prime vortex, 2012:  by continental split vortices,  very bad for sea ice,  2016;  very strong El-Nino year , again with the spit cold temperature vortices,  2020,  really 2018, 19, 20 dominant Archipelago CTNP.,to 2021 the North Pacific flow year so far.   Basically if this continues,  and there are no signs otherwise.  It will be a dry summer for much of North America,  particularly mi-west eastwards. What really matters for California coastal fires  is the green to yellow threshold,  basically the jet stream hangout region,  in 1977 it was close to Mexico USA border,  now well to the North.   The early preliminary tentative outlook is for  very warm weather to come,  refraction measurements of vertical sun disks also suggest this will be warmest year in history yet again.  WD March 21 2021...

How does the CTNP move? Wherever the ground feedbacks it.

~ The most underrated weather factor,  the location of the CTNP,  in fact rules the world hemispheres weather.

~Locating where they will be basically enables long term weather projections to be easy.

~Refraction techniques can laser predict wether the CTNP be, or not.

CTNP's are known to mainly slowly wobble,  from one point to the next.   Or surprisingly vanish only to reappear thousands of kilometers away.  They basically control weather circulation of planetary waves,  nothing more important weather or climate wise.  The mystery is why do they wobble in the first place,  rather than be moving around according to basic meteorological tenures; 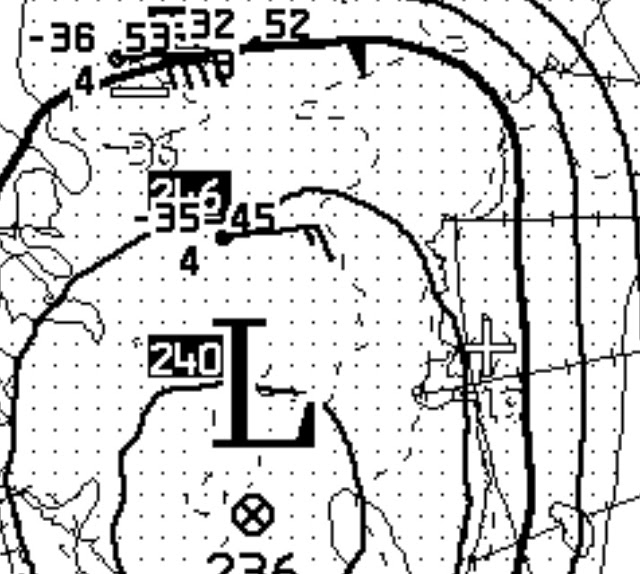 A common contradiction,  CMC 700 mb map,   pressure contour isoclines  do not consistently match  the true center of what would be the coldest point on the Eurasian Continent in the morning of March 5, 2021,  -36 C is well off center.  I would rather pick from a 600 mb map,  but it is not easy to find.  However,  this should indicate that the center of cold is unstable,  in motion,  as they very rarely remain in place, with great understanding that such an event on rotating Earth would be fascinating.

The main problem with respect to predict where the CTNP will move is extremely complex.   With numerous variables to consider.   Probably the most complex component, on top of advection, clouds,  radiation balance, presence or lack of precipitation,  albedo, insolation,   on top of all these,  is surface properties.  Not a black and white issue at all,   water surface alone, is not as simple as a mirror lake, the waves,  and there are many kinds of waves, the mixing going about,  salt,  fresh water,  top it with ice, grey, fast, 1 year, multiyear, snow covered, hummocked,  ridged,  mix pans including all types,  not forgetting ice and open water combinations.  And we go to land, more complex than water surfaces,  by wildly varying topographical features,  what is on it,  vegetation, rocks,  a mix of both, flooding, snow, and snow cover is not uniform at all:

06/00 ,  06/12 and 07/00 UTC CMC 700 mb  analysis.  Nowhere else to go but Northeastwards,  the warmer North American side CTNP heads North.  While so,  it will get warmer much further South.   This far away action will only be felt as a significant warming,  innocuous, strange, announced as if it appears like magic, in  Windsor Ontario for instance,  jump warming from -3 to +11 C.  The movement of this CTNP also engenders the jet stream to bring up a blizzard giving warm cyclone from left.  In this case North Greenland is the coldest place in North America, until the CTNP moves further towards Spitsbergen,  not far away from an Eurasian cold cell buildup. But this cold center was created by steady weather,  a mere day or two,  over the Archipelago,,  no significant wind,  clear air,  the recent past warmed by advection  surface vanished,  quickly building extreme cold in its wake, until by virtue of its presence,  the general circulation changed favoring instability.  If there was greater factors,  such as profound long night continuous cooling in  the Canadian Arctic,  this CTNP might have outgrown itself creating rogue vortices 2000 nautical miles further South.    But it isn't winter 2020-21 thing,  which was mainly a late weaker cooling of the Canadian Arctic namely because the prime CTNP of Northern Hemisphere started and stayed in Eurasia for a long time.   However,  in a mere two days,  the weighted temperature of the entire atmosphere dropped quickly.  If circumstances were other,  the Low pressure on this animation above would have headed South instead.  But for now,  the surface ground and icy ocean "fridge walls" are bereft of deep cooling potential,  the power to fabricate colder air not as strong as it was decades or so back.
March 07 1200 UTC
North Greenland is where the CTNP exists: 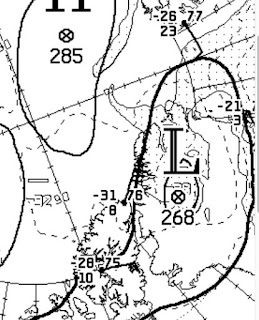 Automatically changing the weather all around it.  High altitude winds spin around it , in fact the jet stream is at the North Pole

There are 2  Polar Vortices at present 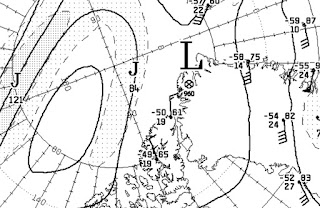 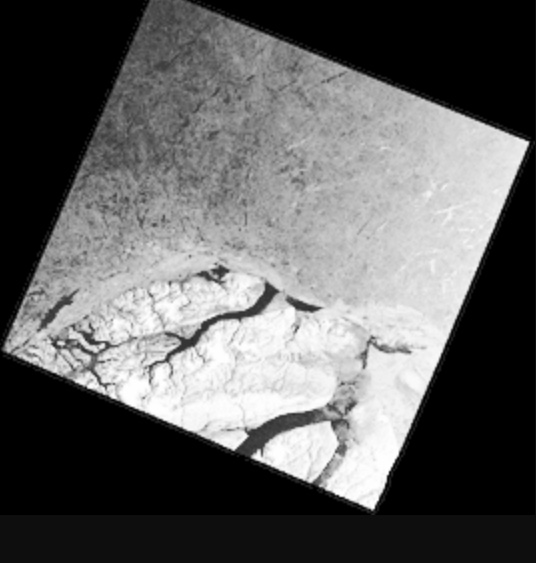 North Greenland is not part of the giant glacier Greenland is famous for. It is like Ellesmere Island,
here March 7 Polar View SAR demonstrates it still has a lot of snow.    Now there can be a buildup of cold but it wont be wide, cant be done next to the Atlantic Ocean, the only place to expand is Northwards where the sea ice has been at record low thickness,  so it is stuck in place,  vulnerable,  not ground for cold air expansion. Unlike where much further West the new CTNP forms.
To know when the grounds are fertile to create more winter,  it is not just a matter of darkness,  stable atmosphere,  although these are the core factors,  but even now,  the low sun does not create more cold for much of North American Arctic.  What is needed, is for the ground to be deeply frozen, for sea ice to be extremely thick.  A CTNP can exist much further South, given that its grounds are deep frozen for a long time,  the Polar Vortex expands in such happenings.  In many instances the CTNP can be created locally,  1000 nautical miles away from the Arctic.  But to know whether the grounds are apt to do so requires a multi parameter simplifier.    Because the grounds can be immensely complicated: 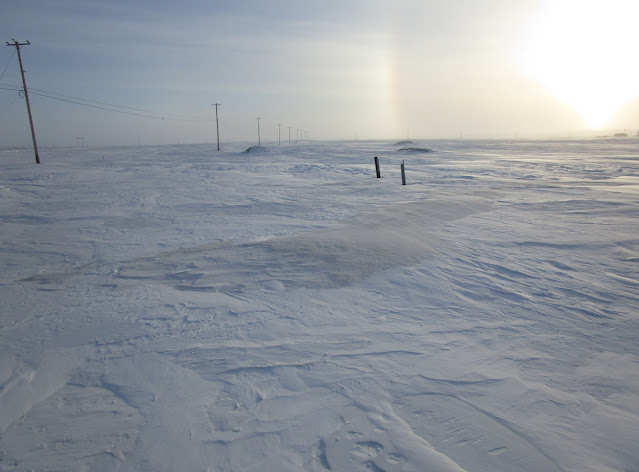 Snow cover alone is very far from homogenous,  can't be simplified at all.  Here we have multiple layer forms,  the darker one is ice formed in a wind blizzard, sublimation of which can't be compared with grainy snow cover,  which always changes by the wind.  Here is another factor visible by the halo
ice crystals in sufficient quantities falling from a warmer atmosphere above can alter the energy balance of the surface as well. 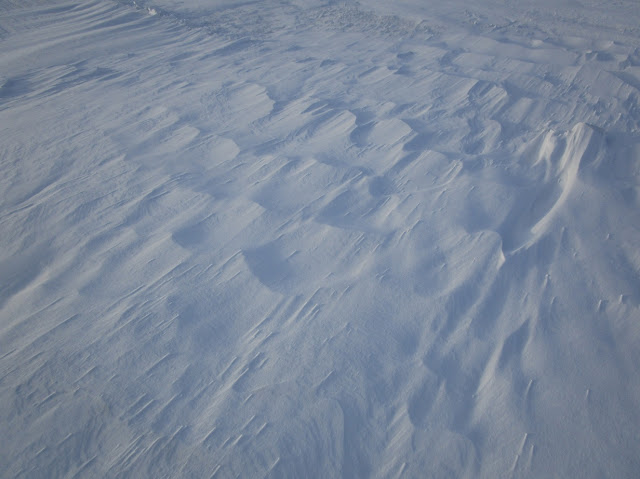 Not to forget ,  a flat snow surface one day may change to snow desert dunes the next,  these increase sublimation as a cooling factor.
A new optical refraction method easily recognizes the varying energy flux on the surface,  over wide areas,  as far as the horizon can be.  Also sun disk measurements identify uniform atmosphere or a mixed thermal mash up,  unstable for cold build up.  Through such observations,  we can identify whether deep cooling will build or be demolished.  WD March 7 2021
Posted by EH2R at 11:04 PM No comments: