~  Is strange, since La-Nina usually cools the planet

April May, the unusual position of the North American Polar Vortex extreme limit existed nearly all winter so,  this projection not a difficult call,  except we are dealing with unknowns,  such as different patterns from the onset onwards.  Early on, over the Arctic Ocean the usual North of Beaufort sea High will remain strong by not so apparent but somehow present La-Nina,  exacerbating Fram Strait sea ice flushing.  North Atlantic and Pacific usual Lows will impact B.C. Canada and UK along with NW Europe, mainly carried over by the Jet Stream (edge of P.V.).   Obviously the extreme North positioning of the jet stream slows the circulation to its South,  from present gently, to a crawl in the fall, and brings out the best or worst of weather.  This shift makes tornadoes more difficult to form in the deep South.
However this repositioning always dries up California,  not so good.  I would expect a wet UK, not so unusual.  The big story is the not so much measured La-Nina, whose effects are in some regions almost completely smothered by the North Pacific warm surface temperature blob.  So I'd expect less wet than usual a soggy Ireland Norway and UK a weaker flow from the Southeast would do so.

June July,  Beaufort Gyre switchover from a stagnant High to a near permanent cyclone will occur very early in June if not earlier.  The reasons for this are La-Nina and greater over all Arctic warming. The dumping of sea ice East of Greenland would be less severe, and the cloud cover provided by an Arctic  Low pressure system usually overestimates sea ice melting predictions.   The shrinking Polar Vortex will ultimately provide for higher pressure systems to linger on top of the Norther Hemisphere continents,  as well as high latitude sea born cyclones, the difference being,  with a strong sun the June July High pressures usually provide greater warming,  and a drying feedback contributing to further heat, hence anticyclonic dominating the fleeting less vapor rich weaker cyclones.   Thus Northern Hemisphere lands  will be High pressure prone, leaving the Arctic a haven for cyclones,  a place for clouds to be strong in numbers. NW Europe will witness nice clear truer color sunsets more often than usual.   Siberia will be in a likewise summer 2020 heatwave as well,  the main reason being threefold, one is the invisible La-Nina (less clouds),  the weaker flow of warm Atlantic moisture, and the much cleaner air given by the last days of Covid-19 atmospheric de-pollution.

August-September much like 2020, except the CTNP will be close to vanish ,  not to be found even where the remaining sea ice will survive the summer heat onslaught.  But at September end, I expect the first winter High near the North Pole Greenland area. The time for switchover back to winter mode over Beaufort Gyre,  will be crucial in saving what is left of the sea ice as well, I think the steady Gyre High will come very late though,  not enough to have a greater melt season impact.  This period is usually very interesting,  because summer rages further South while winter starts at the Pole.  The Low and High pressures switching from favoring warm or cold modes get blurred at the climate starting to expand borders. Likewise, hurricanes,  end of summer creations, clashed with the beginning of the Polar Vortex for milleniums.  These geophysical encounters moved the hurricanes rather rapidly. As a result of dramatic Polar warming they will move less but can cause much more damage,  even if landings to ground become less numerous,  because  lesser longitude wise life  is a direct result of a warmer autumn Arctic.  At about the onset of the North Pole long night,  Greenland, because of its nature of being colder than surroundings, may prompt a  steadier High Pressure above the warmed North Atlantic, encouraging hurricanes to hug the America's coast on a slow journey Northeastwards.  In contrast, of the North Pacific where a lower sun effect will meet the quasi constant Pacific warm temperature blob,  a year round source of strong Arctic 'hurricanes' , the violent cyclones,  which in the past has exposed further the grim state of summer Arctic sea ice.

The only thing really unknown is the new state of circulation affairs,  what will a non existent really normally perennially cold Polar Vortex world look like?  We are about to find out.   WD April 25, 2021 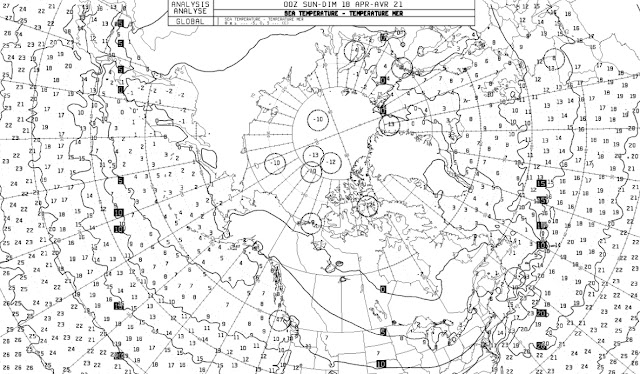 ~In a short time span Arctic spring and autumn days have shortened.

~ This can be visually observed multiple ways,  all to to with atmospheric refraction.

The latest Arctic warming can be summed up in 3 periods by sunset tardiness, of which some part of the sun disk can be seen well below the astronomical horizon (A.O. :  horizon seen if there was no atmosphere). In the High Arctic Cornwallis Island some sun disks parts have been seen lower than -3 degrees (that is 3 degrees of arc below astronomical horizon).  Furthermore when seen so much below the A.O.  under the violet sky,  sunsets shift Northwards quite a lot,  prolonging the day. 3 recent periods of concern would certainly be 2001-2005 ,  the last thicker ice years,  2005-2010  intermediate warming/thinning of sea ice, 2011 to 2021 severe thinning years,  of which the first period had 6 Month of March sunsets 2 degrees below astronomical horizon,  the intermediate period had 3,  the longest lasting period of 11 March months had  only 3,  this is a serious decline in optical properties caused by sea ice and air interface.   Visually this can be studied in greater details,  although I have no illusions about how convincing these images can be,  atmospheric refraction is very poorly understood,  I'll endeavor to explain nevertheless:

March 20, 2021.  At first the sun appears red and reddish throughout,  by moisture,  March 2021 had more snow,  more encroaching Pacific cyclones, than perhaps in the entire observation period of 2001 to 2020.  This sequence has been captured in a brief cooling  build up period between cyclonic storms.  The sea ice at horizon is also at thinnest recorded levels.  The sunset was not tardy, -1.39 degrees below A.O.  .  The main feature of interest is the lack of laminas,  the lack of roundness.  At end you see the beginning of purple sky light.   Basically there was no great temperature gains near the surface upwards.  This makes for a rather ordinary (for the Arctic) sunset.

March 19,  2009,  much drier air,  therefore much cooler over all winter,  on this moment -35 C surface.
These impressive presence of laminas are a feature of a colder atmospheric processing,  these occur when there is layers of warmer air above, but with very cold interface between sea ice and air in light or no winds.  These laminas rose undisturbed by strong winds, forming multiple thermal layers in stable air,  again a feature of a long time cooled surface facing the rising heat and sun as winter ends and spring begins.

March 19,2010.  a windier sunset, but with great thermal rate difference,  it was -33 C a few hours back, at this sequence it was -23 C causing a lapse rate favoring an extreme late sunset,  indeed 1.93 degrees below the horizon.  Warm air advection is one cause of sunset tardiness by reasons of refraction optics.  The cold ice did not warm up instantly, as the air just above changed,  for this to happen in greater winds,  the sea ice must be thick and sluggish in warming.
One may not conclude a great Climate Change with one observation moment,  rather it be known,  the entire EH2r corpus of data,  likely 10,000 individual sunset sun disk observations, which have gradually evolved into mundane sunsets rather than exciting colorful, extremely strange, lines upon lines stretching to "fire on the ice" sun line before dusk.   What we are witnessing is the signs of drastic warming affecting all visual aspects of land, sea and even winter. WD April 6 2021