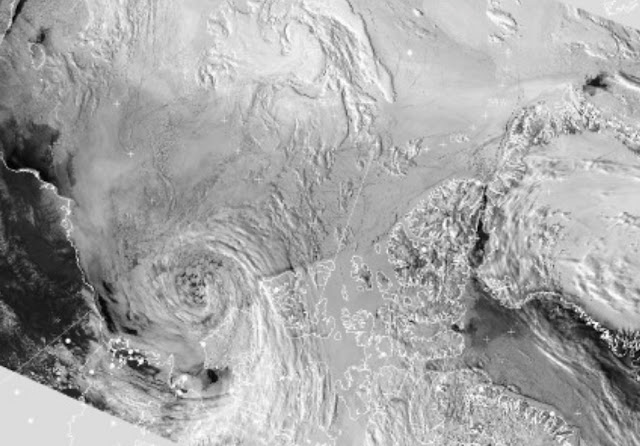 A "see through"  cyclone appeared May 25 2019,  CMC NOAA visible capture.  This has undoubtedly slowed the gyre clockwise rotation,  it is a disrupter of Arctic summer from being bombarded with sun rays.  University of Wyoming 1000 mb prognosis (above),  notice this Low has temperatures colder than adjoining High pressure.   It is a true sign of summer, hence a switchover, from Anticyclones being coldest (winter) to Cyclones cooling the effects of a higher sun (summer).  The relative permanence of this scenario will dictate the outcome of sea ice extent at minima come late September.  The biggest factor is the radiative solar penetration of  "see through"  cyclones,  if they are warmer the more sun will penetrate,  prompting either a rapid devolution or a greater melting than otherwise a cloudier Low may give.   This switchover came much earlier than last year,  the current trends indicate a 3 week ahead in time on 2018 events,  either the disintegration of the main CAA vortice or 3 week earlier switchover definitely means a different outcome than last year. WD May 26,  May 28 (correction thanks Jim) 2019
Posted by EH2R at 10:57 AM