~Projection very much similar to last year ,  except there are some strange features which suggest subtle differences.
~Most ENSO models call for El-Nino,  but all Arctic data suggest La-Nina conditions
~Extraordinary Canadian High Arctic dominant Cold Temperature North Pole returns 2nd consecutive year in a row,  a statistical improbability.
~Last years projection was again extremely successful except for sea ice minima extent,  as usual.
~2019 wont be warmest year in history,  likely # 4 to 6 for the Northern Hemisphere.

Melting and diminishing extent as late as October 3.  The course of winter weather was set,  the bulk of sea ice was North Pole centric,  triggering a High Pressure spreading out from the Pole. This caused a distinct early Polar Vortex,  warming and keeping the Northern Urals snow free and especially Bering Strait kept continuously warmed by North Pacific warmer flow.  The snow free North Central Russia  eventually froze more rapidly,  vast tracks of exposed lands with the sun less than 20  degrees in sky,  night longer than day,  a strong North Central Russian vortex subsequently continued the Bering sea environs warming,  nearly for the entire winter.  Thus Beaufort sea ice Northwards to Pole set thinner,  ready for onslaught of the higher sun.  The entire winter was first mainly dominated by North Central Russian Vortex,  very slowly ceding dominance to the Canadian Arctic as late as now.  The warmth,  especially onto Alaska was  again a main feature of winter.   The broken up sea ice of summer 2018 filled the Canadian Archipelago channels,  cancelling huge cruise ships from accomplishing the NW passage,  an impossible adventure in the not so distant past,  now a routine schedule voyage,  was cancelled by extra melting.  Mid-winter  Pole centric vortex cut off snow carpeting Arctic Ocean sea ice as much as preceding winter. Therefore increasing accretion of Pole region sea ice during the long night..  In North America,  winter came late and eventually fierce by same reasons,  especially with lands not covered by snow,  warm at first,  eventually bitting cold since land looses heat quicker than land covered by thicker snow layers.  As a result the same thinly covered by snow lands warmed up faster than the regions with greater snowfall, mainly Eastern Canada.  The duality of warmth in the West versus colder in the East fueled the Canadian vortice to become more extreme,  yet smaller than last year.  It is known,  smaller vortices within the Polar vortex are usually colder,  even as late as April a strong Canadian side vortice dominated the High Arctic.  This late event was not hampered by clouds,  a mainstay of Arctic April weather,  hence a strange very unusual "Big blue"  sky event ,  the biggest in more than 20 years was created, strange since a modest  El-Nino is on,  unlike 2017-18 when it was more borderline La-Nina:

Mid April Sea Surface Temperatures anomalies,  2015 vs 2019,  both official El-Ninos,  2015 to become warmest in history,  2019 ,  not offering any strong warmer or colder trending,  but there is a difference,  2015 had signals sent all the way to the Arctic,  2019 far less, Archipelago weather from January onwards was remarkably cloud free.  Very unlike 2015.  2019 Archipelago cloud free skies strongly suggest an ongoing La-Nina or Neutral conditions.

The main difference between a true trending  El-Nino vs La-Nina sky is the lack of clouds,  especially the very high ones,  2015 had more,  seen darkening twilight,  2019 same Mid-April  less to none, very good condition to cool the atmosphere deeply.   Yet 2019 SST charts suggest El-Nino.  As if post massive El-Nino of 2016 La-Nina or trending towards La-Nina is happening,  even though the charts show no such thing.

Look carefully at this NOAA chart,  97-98 and 2009-2010 El-Nino  were followed by significantly long La-Ninas,  not so for largest 2015-16 El-Nino.  This strangeness suggest 2 possibilities,  a truly big La-Nina is coming,  or sst anomalies calibration  need a correction since Earth Oceans have warmed a lot, even since 1998  (by about 0.5 C).   I tend to think it is the latter,  the Arctic has had 2 La-Nina like late winters in a row.  But there is also the shrinking Polar Vortex to consider.  Namely not near Alaska   having March 2019 being warmest in history temperatures,  +8.8 C above average.   It is strange,  but true that a smaller vortice or a rogue vortice about to detach from the Polar Vortex, can be extremely cold.  In our current Canadian Archipelago case,  the reason for this is a very long period of clear air,  with sun appearing after the long night insufficiently high in the sky to warm up a snow laden polar land and sea surface.  In the CAA, the clear sky period started in January till today,  more than 3 months and a half long.

0, that is right,  0 % average vertical sun disk size growth the second year running,  a statistical near improbability,  given every usual late winter early spring had a season to season variance for each 17 preceding seasons.

2019 shares  the bottom of the pack,  of 120 sun elevation mean decimal levels,  not one was above average,  again compared to 19 in 2016 right after peak strongest  El-Nino warming in recent history.  2019 was arduous with data acquisition of nearly 640 sun disk observations,  a record exceeding 2008 which was a true La-Nina trending late winter.   Vertical sun disk expand in size when the upper atmosphere is warm,  shrink when colder, these measurements include vast swats of the atmosphere, from 210 to even more than 1295 Kilometers.  Despite March 2019 being warmest month in history worldwide,  the center of coldest was right here in the Canadian Archipelago,  when the sun disks shrank in size as the sun is getting higher in the sky. The table above reads almost like ENSO trends or peaks.  So it is a very significant piece of information, having forecast powers, especially for the Northern Hemisphere temperature record,  suggesting in advance that 2019 will be about 4th to 6th warmest in history, similar to last year.    But the size, or footprint of cooling was smaller than last year.  This implies different circulation patterns: 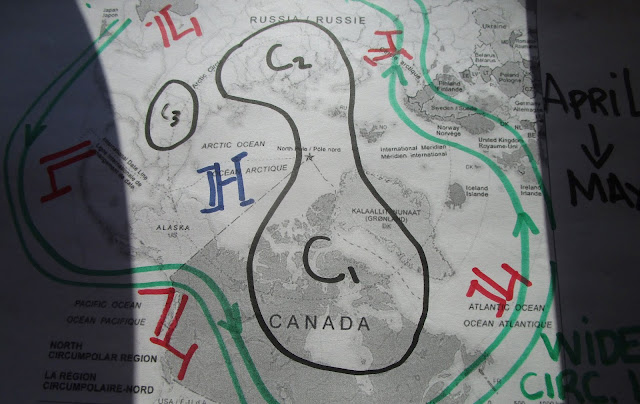 Alaska will finally share a bit of winter namely because the Cold Temperature North Pole "C1",  which grew colder  even with the rising sun, literally defied joining the warmest month in history just past.   The main story for sea ice here is the very persistent High pressure over the Arctic Ocean Gyre,    keep in mind Fram Strait had sea ice dumping growth since October 2018.    Therefore sea ice extent is all time lowest at present,  also the Bering sea very little extent contribution shaped this unfavorable for sea ice scenario.  Note the wide area "C1" circulation entails.  all the way to Florida.  Its circulation horizon.  Obviously Midwest North America starts colder along with Eastern North America,  because there was more snow, inviting the CTNP to wander about Southwards.  The jet stream can only weaken and migrate Northwards from here. 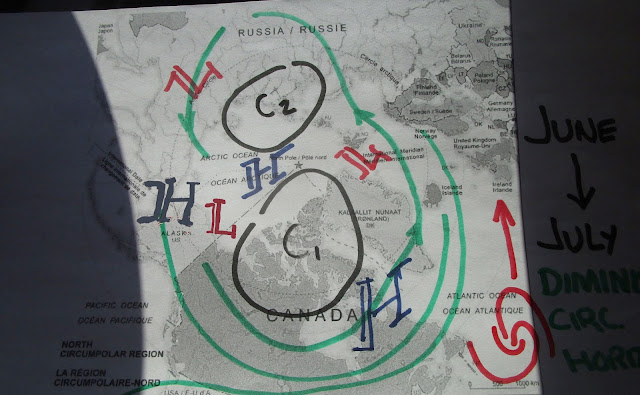 June-July circulation horizon shrinks,  midwest North America warms a whole lot with mainly drier air.  Last summer's record warm Eastern Canada USA summer heat will be exceeded.   Barents and Kara sea will be spared the presence of the higher sun by clouds.  The switchover from persistent anticyclone to cyclone over the Arctic Ocean Gyre with persistent cyclone will be not lasting as long as last year.  The North Pole will get a healthy dose of insolation at peak of sun elevation.  The persistent cyclone over the Arctic Ocean Gyre will have "see through" characteristics, not necessarily cooling the air below as much as it normally should. 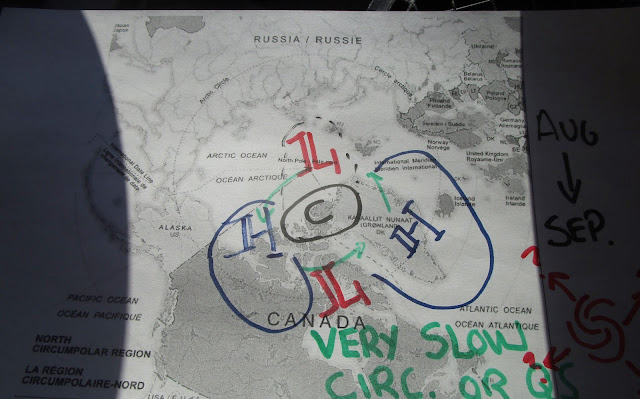 The net peak of heat impact of the higher sun would be to shrink the Cold temperature North Pole to barely exist at North of Greenland and Ellesmere Island.  Now the influence of overall  more heat than compared to 10 years ago or so  will be a generally slow circulation world wide.  The impact of a much smaller CTNP horizon have already been observed to a lesser extent in 2017,  hurricane Harvey lack of mobility  being a good example.   The further away areas from the CTNP  will languish with no circulation but by the grace of large anticyclones not moving quite readily,  it does not look wetter for California.  The net general weather scene will be very similar to summer 2018 but with lesser circulation primarily due to encroaching stronger heat signal from land and ocean.   Again tornadoes should be hopefully less numerous than average and more prominent Northwards.  The very weird, if not expected by AGW,  ENSO not reverting to a deep cold  La-Nina, especially after the great El-Nino of 15-16,  means also lesser in numbered hurricanes but dangerous by them not moving Northeastwards as much.   Not so for typhoons, again readily guided and supercharged by doldrums or weaker circulation on top of a much bigger Pacific.

Now with the easiest projections out of the way,  let's try , once again to forecast the sea ice minima: 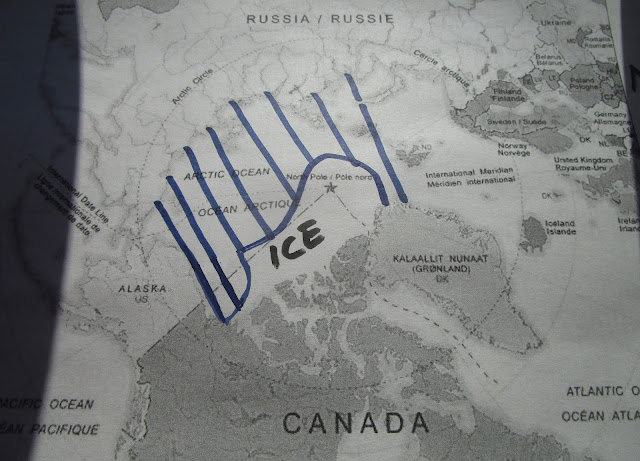 Last summers sea ice extent projection failed because I didn't take into account a particularly strong Gyre current  ,  which I knew about,  especially at peak melting period.  However, sea ice was very much churned by this strong current massively replenishing Beaufort sea with broken up ice,  the key not taken into consideration factor was fluid mobile pack ice, which did have a persistent cyclone above at peak insolation period (as expected),  this slowed overall melting. The difference between 2018 and 19  is a thinner ice footprint resulting from more prominent winter warming over the same area.   This means that even with switchover from persistent High to a Low over the Gyre ,  the sea ice should vanish more since it is thinner from 2019 ice extent maxima extent onwards, which is currently at all time lowest expansiveness ever.   Sea ice should look grim come end of September,  near or lesser than 2012 extent,  with next to North Pole navigable by non ice breaking ships, with Northeast Passage opening first followed by Northwest passage more open than,  not as clogged as last year,  but not readily navigable.  WD April 21 2019
Posted by EH2R at 9:35 AM