NOAA daily composites March 23 2017. Skin temperature (left) surface air temperature (right). Barents sea area,  vicinity Franz Josef lands Russia,  there is a band where Ts=Ttsi ,  or Ttsi is a bit warmer than surface temperature,  I usually would consider this as within margin of error from Satellite acquisition, I consider the mean  Ttsi= Ts there. 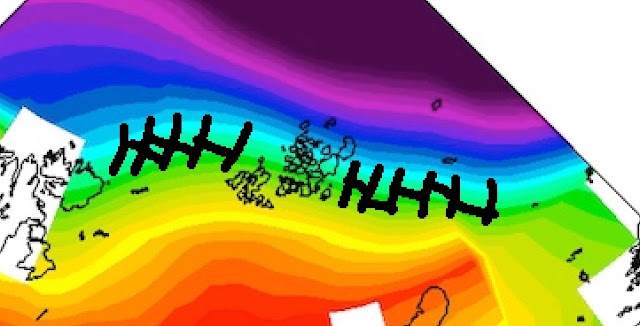 Skin temperature areas marked in black where the likely melting is occurring. 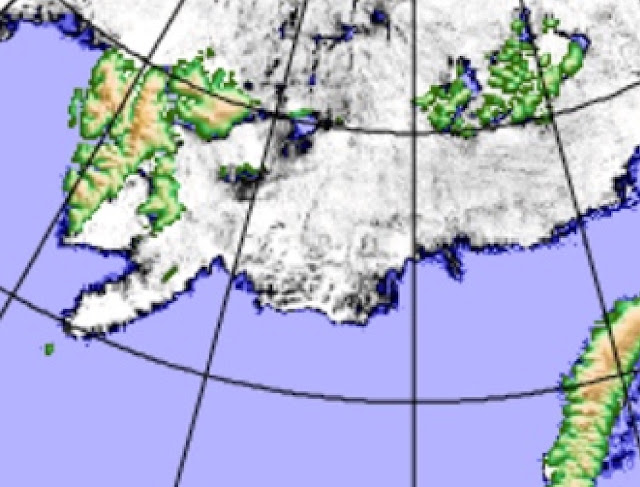 ~ The very reason for winter Arctic surface based inversions  can only last till
sun rays become vertical enough to cancel them at the source,  the "skin" surface.

We notice NOAA ESRL "surface skin" temperatures with same color scales Mean Composite March 1 to 15 1987 followed by 2017.   The first deep signal gathered here is how massively colder Arctic Ocean ice pack was in 1987,  nearly all of the Arctic Ocean in deep purple, with 238 Kelvin at the Pole,  246 degrees  Kelvin at its periphery.  Note the red zone North of Atlantic ocean,  warmer than 264 kelvin,  this is the only common mean temperature with these 2 periods 30 years apart.  2017 has geographically much warmer skin temperatures,  reflecting the thinner sea  ice locations.

The key source of this rule is at top of ice or snow skin,  its temperature follows the surface air temperature trends.   Top of thinner sea ice is much warmer than thick sea ice.  Therefore the air has warmed along with the advent of thinner sea ice by substantial average margins.  This absolutely implies a current much thinner near North Pole sea ice pack,  while very thick multiyear ice North of Ellesmere and adjoining Islands are now the last remnants of a once much thicker Polar ocean pack spread out all the way to Russia.

Like a mirror,  top of sea ice temperatures varies with surface air in tandem,  if ice becomes warmer so does the air, the top skin is always cooler for rather simple and complex reasons,  to be explained on another essay.  Only solar forcing,  an external input of energy,  with especially higher elevation sun rays,  warm the top of ice/snow to render sea ice to air interface isothermal. However,  now you can study indirectly where the thinner ice is with mere temperature maps because of the relation between top of ice and surface air deduced from the prime refraction rule.  WD March 26,2017

~Ts>=Ttsi,  Surface temperature is always greater or equal than top of sea ice temperature
~ Recommendation for buoy thermistors:  measure in the shade
~ This rule is useful for calibrating remote sensing skin temperatures
~ Top of snow layer is coldest day or night,  cloudy or sunny

One of the greatest features observed at the sea ice horizon is seen when the Astronomical Horizon is reached,  this doesn't happen at any other time then when the air above it is isothermal.  Above sea ice air can't be isothermal without downward solar flux equal or greater to the upward.  This horizon altitude is only attained mainly in the Spring when solar radiation cancels the cooling done by top of sea ice deeply frozen over the long Polar winter.   During the long Arctic Night,  the Astronomical Horizon was never observed,  the horizon always was above A.H...

for the first formal hypothesis in May 2015,   which included the first ever Sea Horizon Evolution sketch given the various seasonal temperature profiles: 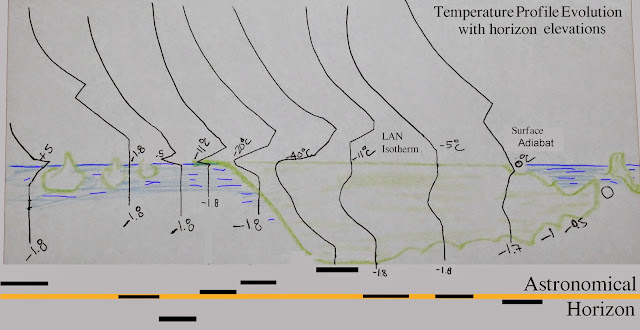 Sea ice in green becomes dominant in winter,  but only in spring can we observe the Astronomical
Horizon (in orange) coinciding with the horizon (in black horizontal line associated with the temperature profile).   Prior to that,   another very important feature dominates:   top of sea ice  is always colder than surface air.     This gives a near permanent high horizon height,  till the sun warms top of ice and in turn warms the air immediately above,  then as the sun gradually rises higher day by day the horizon finally drops to A.H.  But this higher than A.H.  period needed data.

On one occasion I used Arctic sea ice buoys during the dark season to prove this optical rule in April 2016:

During the dark season,  top of buoy thermistors were always colder  than surface air.
Then we needed further in situ observations: 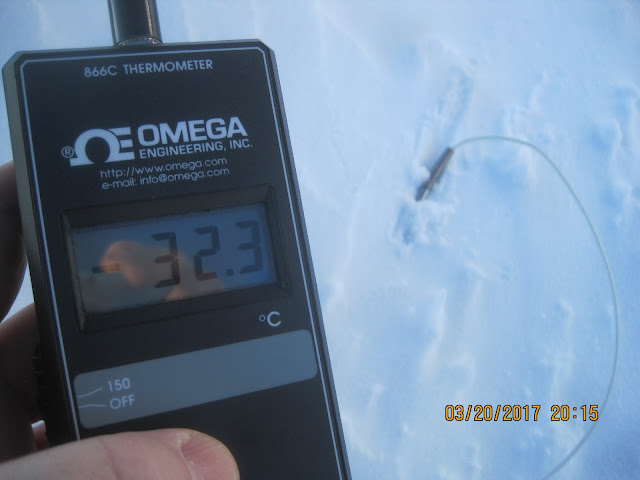 Nice sunny High Arctic day, in the snow drift shade atop a 1 meter high snow column density .36,  the temperature of the top of snow was -32.3.
measured with a high precision Omega monitor attached to  very sensitive Thermistor rated +-0.1 C.
A few meters away , the ventilated 2 meter surface temperature was -30.2 . 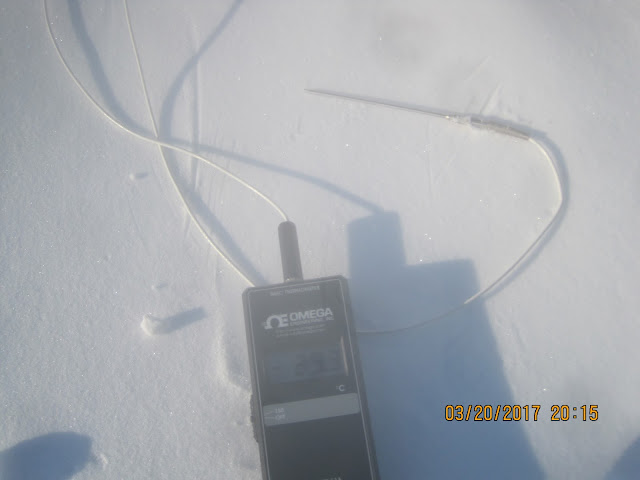 In the sun above or below snow ,  the thermistor warms rapidly to -29.3 in a few seconds. 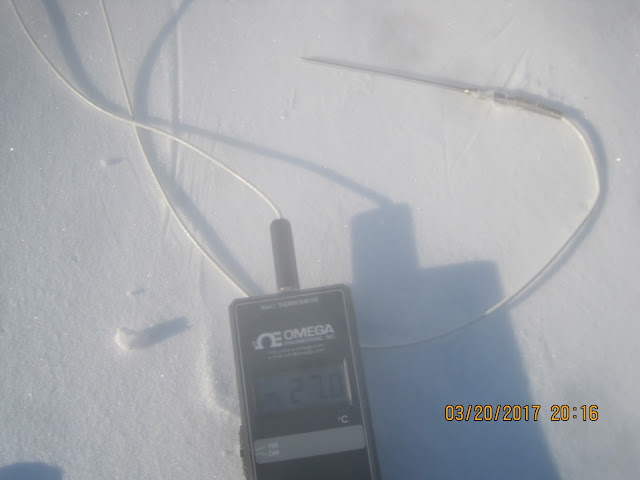 Still outside ,  1 minute later the thermistor keeps on warming to well above -27 C.  The sun affects the thermistor greatly. Just like sea ice buoy thermistors embedded in snow. 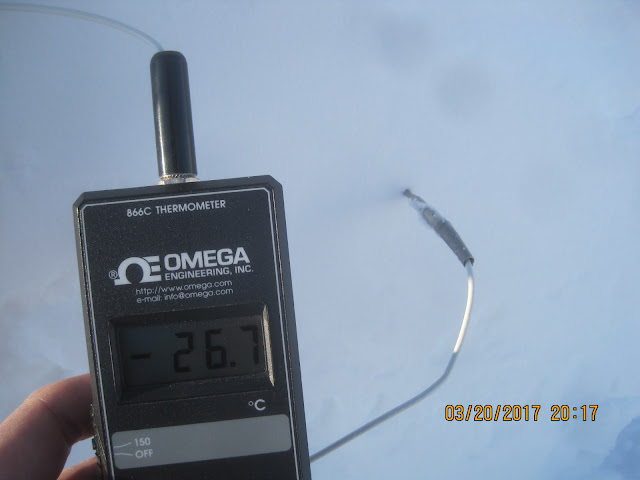 Top of snow column being about 1 meter above ground,  mid way down sideways,  a shade reading is stable at -26.7 C.  Like sea ice, the ground was warmer. 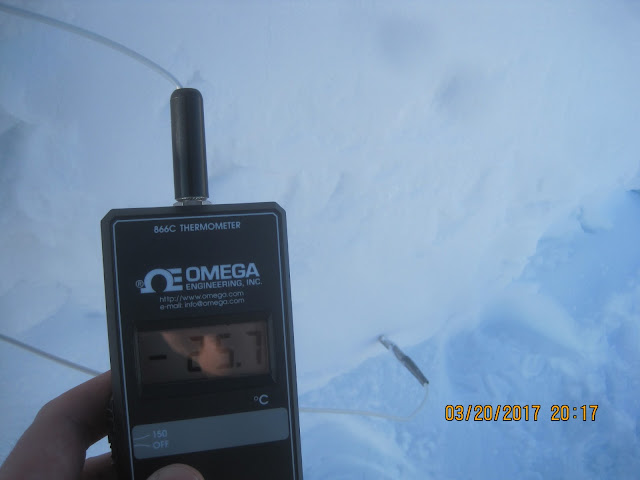 After several days of data,  it doesn't matter whether it is sunny or cloudy,  day or night or whether the temperature trends warmer or colder,  the temperature of top of snow column in the shade (or during evening) was always colder than the surface air.   Thus proving the first rule of sea ice horizon refraction.   I await warmer days.

And now for top of sea ice measurements: 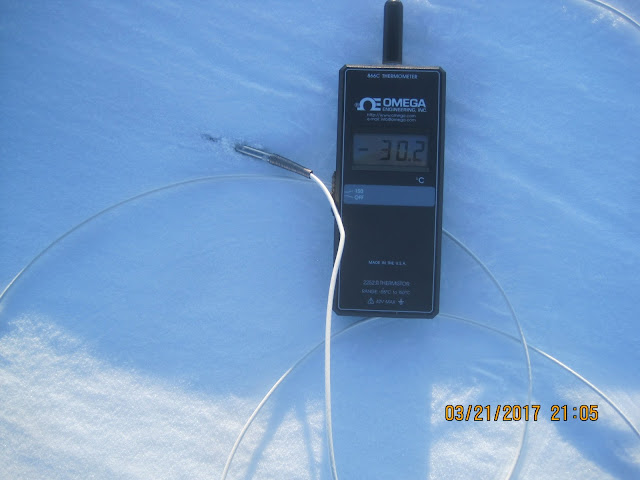 Day after,  March 21 2017,  outside temperature  was -28 to -29 C above sea ice with no 2 meter high ventilated surface reading,  the picture above is snow over sea ice temperature measured within a snow drift shade, -30.2 C.    By the ventilated screen, 3 kilometers away 46 meters ASL,  outside temperature was -30 C with top of snow -34 C (in the shade).  Sea ice surface here was about 40  cm below.   Top of sea ice snow was 4 degrees warmer than top of land snow.   This helps explain why the coldest Arctic air formations usually occur over land and or in the not so distant past,  over very thick sea ice. 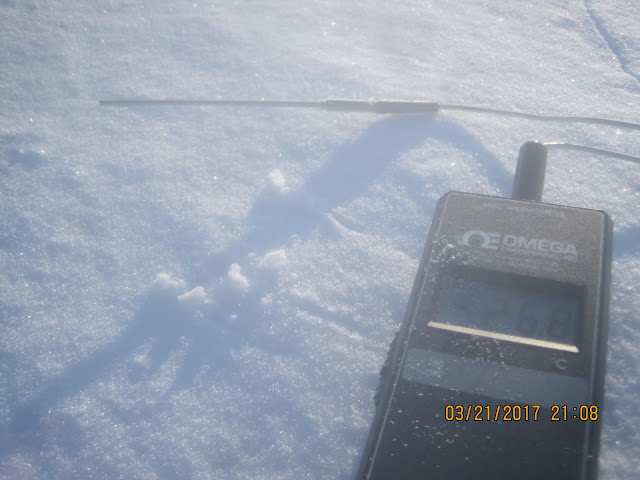 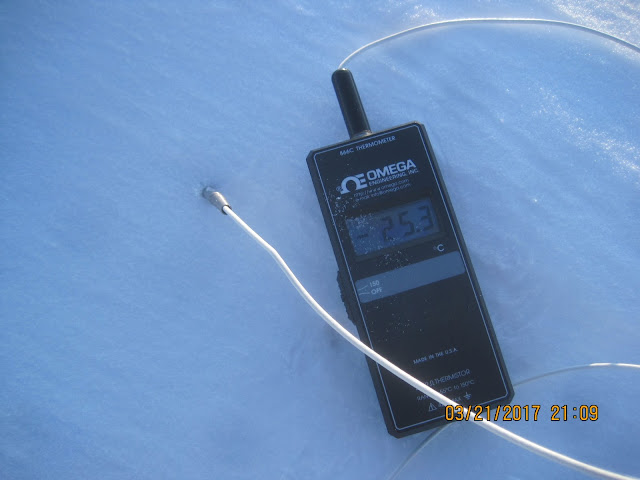 Direct vertical probing,  -25.3 C in the shade,  a few centimeters below the surface layer,  sea ice snow was warmer than land snow. 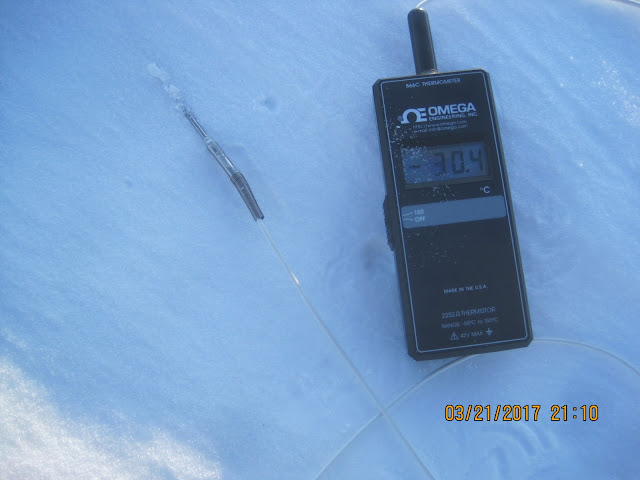 Right by vertical probe hole,  snow skin subdermal was -30.4 C,  colder than surface air and the snow column just below it,  there may be lateral light scattering affecting the deeper reading. 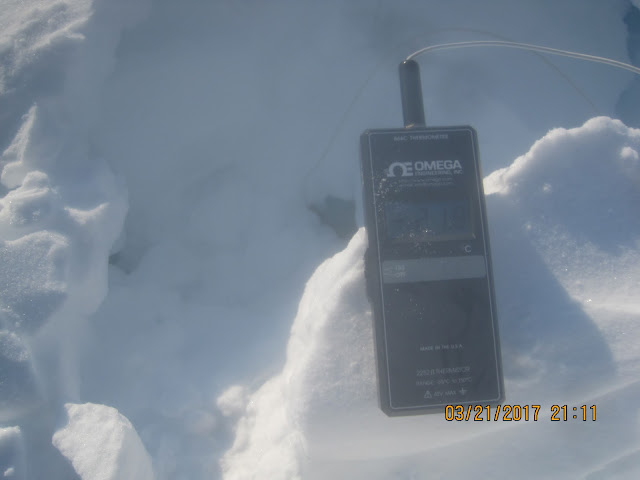 A small tide crack,  2 meters deep,  sensor is about 30 cm from surface in open air,  the temperature was -20.8 C.   These openings are very common over the Arctic Ocean,  the heat injection they give should be quite huge since there are hundreds of thousands such openings. 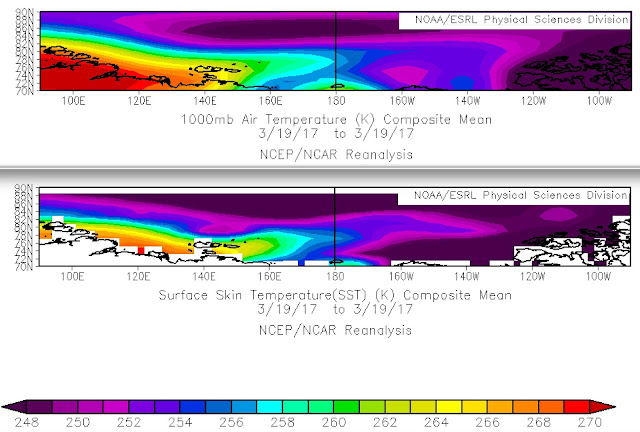 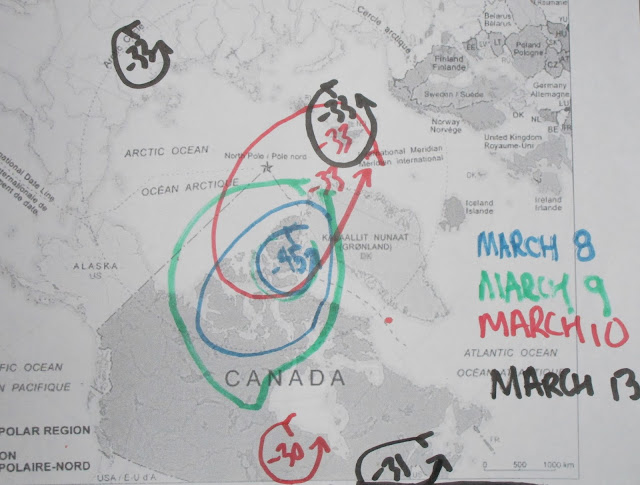 But it meets an "Upper level Low"  as skillfully described by Dr Masters.  But this Low,  a vortex,  born from an offshoot of a massive but short lived cold spell from Central Ellesmere Island at about March 8,  when surface temperatures were more or less unusually normal for this time of the year.  As we follow its progress with 700 mb upper air temperatures,  we can see the gradual meanderings of the coldest air in the Northern Hemisphere,  a spin off vortex,  eventually ended up centered near Montreal.  But tonight the Ellesmere origin of this has warmed 17 C,  leaving vortices in its waning vanishing coldness.  The size and or variations gyrations of the coldest air zones,  quite smaller than usual, marked this winters outlook significantly,  favoring a continuous incursion of Pacific and Atlantic Cyclones to shield the Arctic Ocean from the normal long night lost of heat to space, there is always still a great chance for severe cooling given a lack of clouds by Anticyclones,  this is how great Northern Hemisphere winters were made, but the winter factory shrunk.   WD March 13, 2017
Posted by EH2R at 11:15 PM No comments: 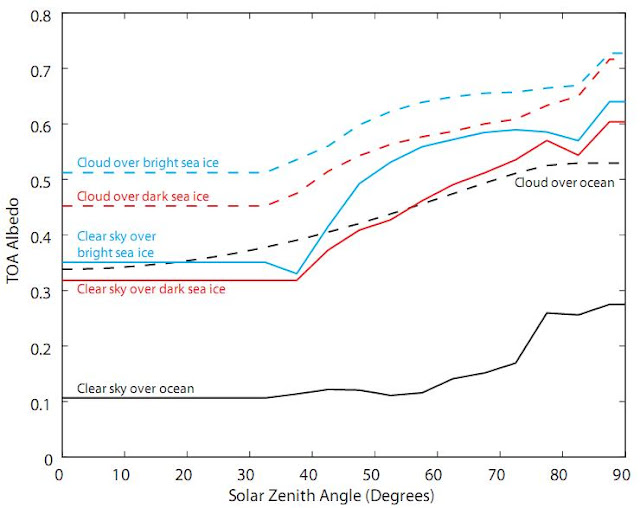 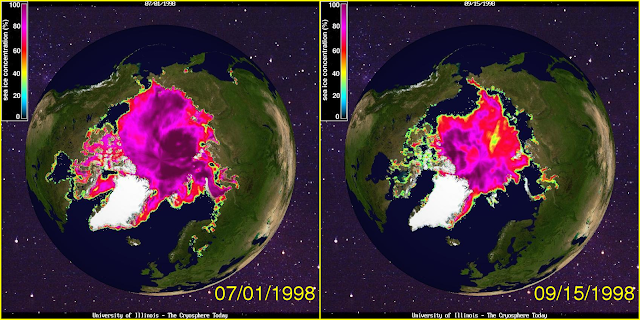 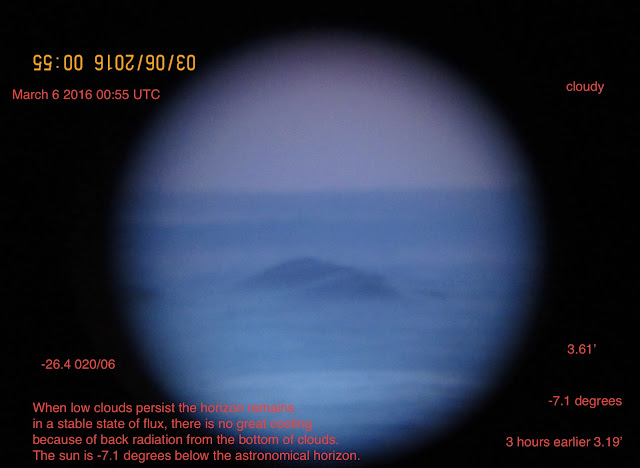 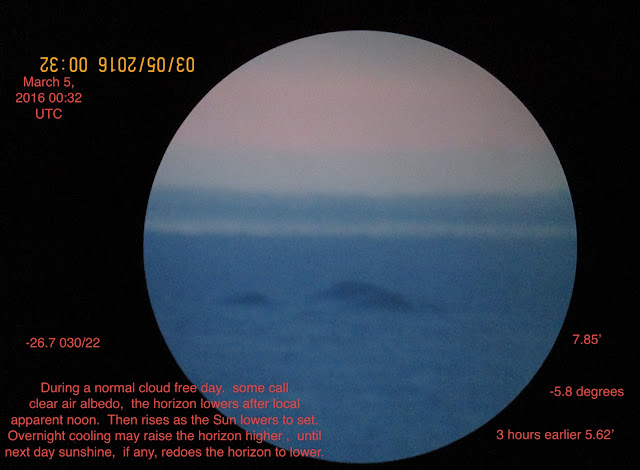 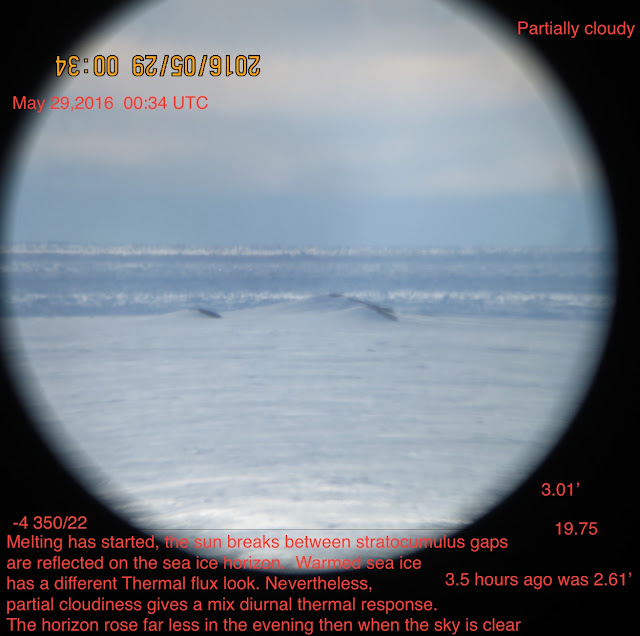 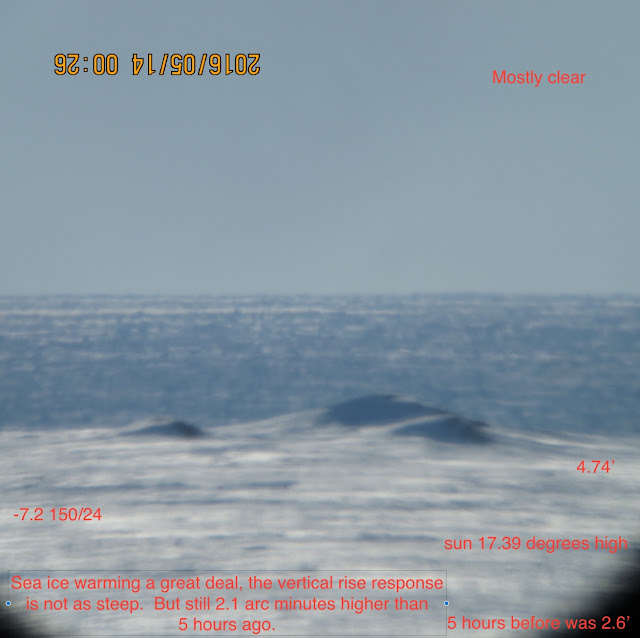 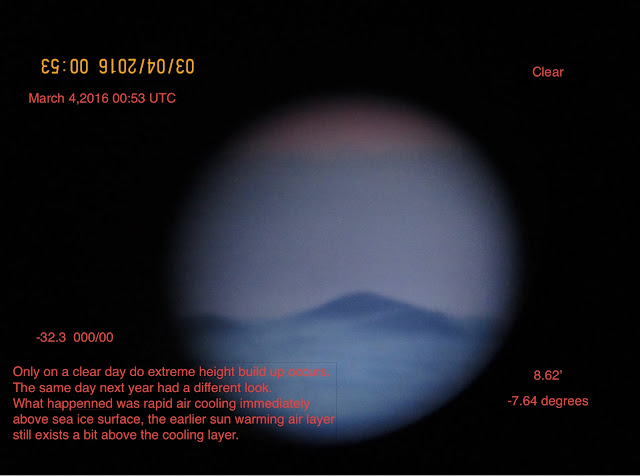 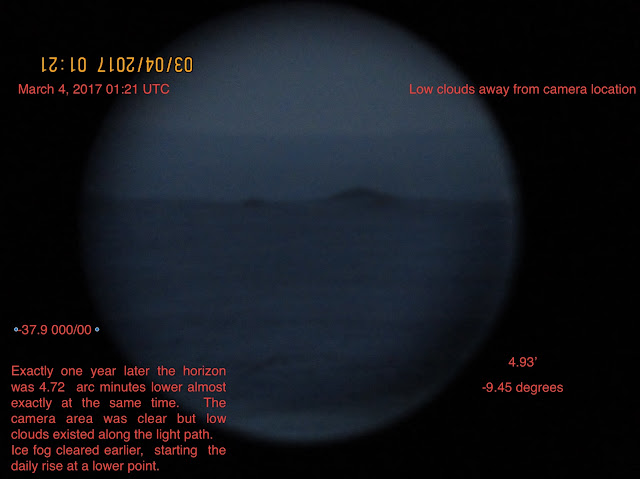 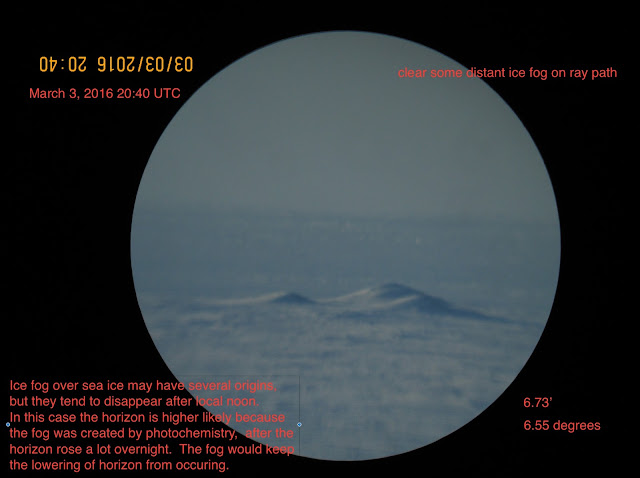 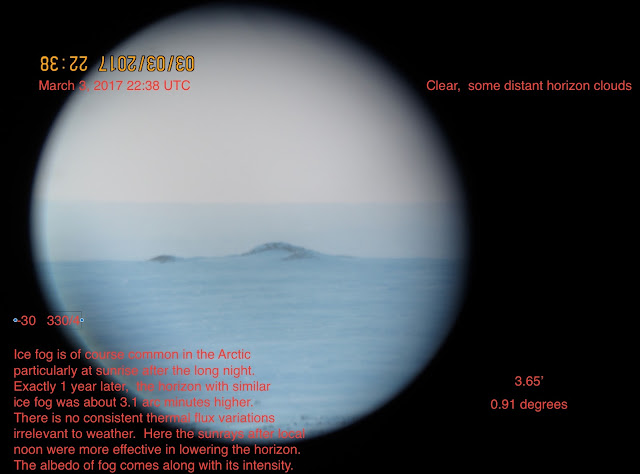 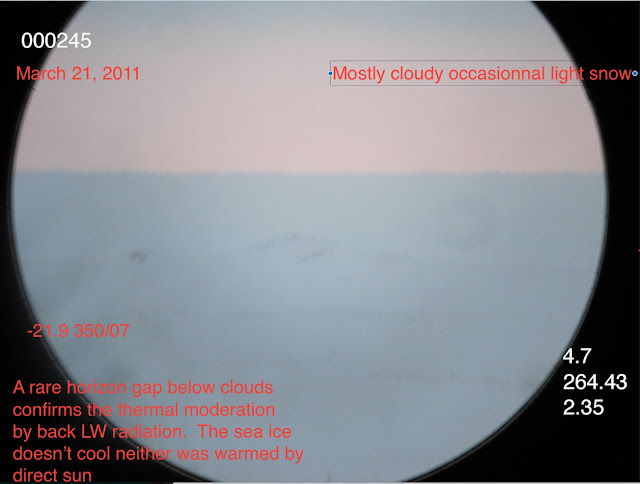