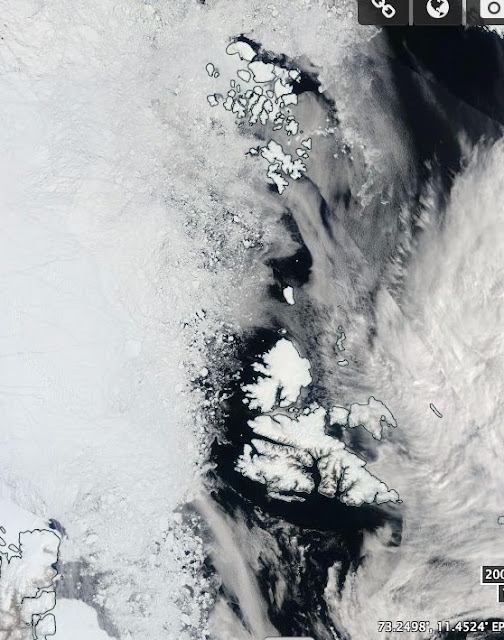 June 14 EOSDIS,  the 2nd melt front appears to have filled with loose pack sea ice spread out because temperatures have warmed much further. Consolidation lost,  sometimes extent values may give a false idea about current sea ice action.  Make no mistakes in judgement,  this is the greatest melt in history.  It comes with scattering of loose ice, from that point,  greater clouds are possible,  although not lasting because air temperatures are too warm.  WD June 14,2016
Posted by EH2R at 6:42 PM No comments:

Preceding article questioning NCAR  calculations can be seen here.  The sea ice Horizon would
drop below Astronomical Horizon (AH) if top of sea ice was warmer than surface air.  In many years of observations it was never observed doing that,  the much lower sea water horizon observations with colder than sst air were never repeated with ice.  Instead spring sea ice horizons maintain AH until evening or until under sea ice melting is 24 hours a day.   This likely happened yesterday,  South Cornwallis Island looking at westward MW Passage.


On a given Arctic spring day, the horizon drops to AH when the air temperature Ta is equal to top of sea ice temperature Ti.  When reaching AH,  it is highly likely that the bottom of sea ice melts,
but during spring the AH horizon lasts a few minutes when it first shows, in March or early April,  so accretion keeps on making net gains.  AH horizons gradually become longer, but when AH is maintained more than 12 hours,  the bottom of sea ice melts more than forms,  net bottom melting occurs.   This has happened yesterday,  when AH was observed 1 hour before the midnight sun.  For the first time I have observed this in May,  this makes Spring 2016 fast ice the weakest heat resisting sea ice observed since 2010 when spring observations have started.

There are several reasons why surface sea ice temperature can't be warmer than surface air. #1  It is optically not observable,  if there is a steep adiabatic profile from ground/ice  temperature to Surface air 2 meters above,  it would give an optical illusion,  similar to hot road mirages.   We have here on this example given many locations with a 2 degree C temperature difference between skin to surface air.  This would give a   lapse rate 100 times more than the normal 10 C/Km.     #2 Thermally improbable.  Top of sea ice temperature influences the surface air temperature,  if the air is colder than top of sea ice,  this is a very unstable thermal structure,  ice would cool rapidly by convection upwards of the air touching it.  While air warmer than sea ice invokes a normal stable thermal structure.    Because ice/snow surface is white,  especially since thermal conduction from lower in the column sea ice is much greater than air to top of ice, air conduction affects top of sea ice less than colder sea ice column core minima,  very necessarily  at this time of late spring.  #3 clouds.  Likely covering 85N to the Pole here,  clouds offer a more neutral thermal flux balance,  whereas there is a steady equal heat flux up and down at the surface to air interface.  The net result is more of an isotherm,  but still slightly favoring the stable thermal structure,  which is colder top of sea ice than surface air.  WD May  19, 2016
Posted by EH2R at 9:01 AM No comments:

Taking advantage of persistent "Big Blue"  of 2016 spring,  a truly remarkable insolation bombardment ,  the right term "relentless" onslaught of sunshine,  we can check and find if refraction gained insights (written here) are true on a planetary scale.    NOAA daily climate composites are very good,  so we look at its sea surface temperature setting or "surface skin" temperatures VS surface temperatures.

Click on GIF image to expand and use your mouse pointer to make comparisons.

If there is a calculation error with NOAA surface temperatures,  it would be "averaged out"  eventually because Ta>=Ti ,  a fact gained by multiple horizon observations,  this feature will show up over a longer term:

Hypothetically,  the longer we average out the  likely Algorithm  error,  the more impossible it would be to find Ta < Ti.

NOAA remote sensing temperatures are quite good,  but I would look at every case when
sea ice is warmer than surface air,  double check the calculations and the physics.  I don't know if this is the error which causes sea ice models to err in making good melt projections.  A  4 C warmer sea ice  than surface temperature (Chukchi anomaly very top GIF above) would make the horizon extremely low and that has never been observed, on top of the underlying thermal physics which would be hard to explain.  WD May 7 and May 11, 2016