2016 is a dispersed melt season with significant differences with a more compact 2012 within densest remaining pack ice.

2016 smack where the densest ice should be has had a lot of open water.

2012 same location slightly to the North of above (because of clouds),  de-coiled sea ice with less open water.


How exactly do we judge melt seasons when one is dispersed and the other one is compacted?
It would be wiser by sea ice area: 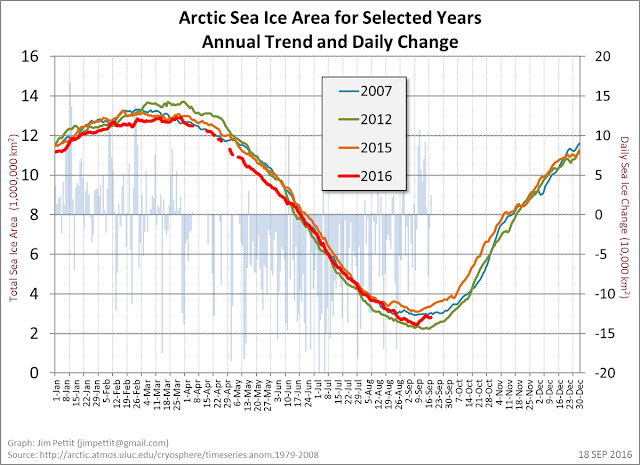 If we look at this sea ice area graph,   the minima of 2016 is nearly equal to 2012.  That is much more accurate than extent metrics.    The significance of all this,  compact years use to be the norm,  since 2012,  dispersed sea ice at minima has become prominent.    Therefore 2016 minimum sea ice is very close to 2012, either way,  just below or just above, this is important to conceptualize,  a simple concentration figure would lay away a lot of confusion though.WDSeptember 23,2016.