How come 2016 melt season is not the same as 2013?  After all there were some lingering persistent cyclones,  apparently cooling the red hot warmed Arctic in June.  First of all July 21,2013 looked like this: 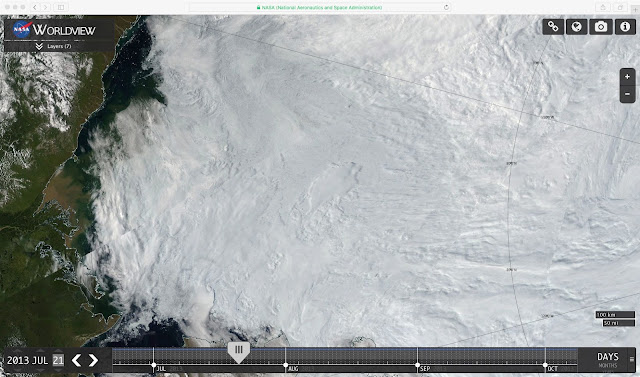 A well covered Beaufort area to persist till refreeze, it was not exciting to watch, especially following 2012 melt season.    While Beaufort Sea ice melted long before July 21 2016.

There was also an incredible "Big Blue" sky period in Spring 2016,  the Gyre turned clockwise under the influence of very long lasting Anticyclones despite Earths thickest ice pans,  for months the Gyre current was reinvigorated in spring set for summer.    This transformed Beaufort Area  into a sea ice melting region.  Effectively emptying the Current Arctic Basin of a lot of its ice,  thinning it to the point where there is now a whole lot more sea water in the mix, more than ever, making CAB sea ice extent lowest on record at this current date of year:

Beaufort Region became the prime Sea ice melting zone,    shattering,  thinning and melting sea ice during July 5 to 21 2016 period especially due to lingering Cyclones whisking by slowly combined with a persistent Gyre rotation.  This shattering of sea ice caused a somewhat sluggish melt rate at times,  in particular when winds spread out the ice in smaller parts more evenly.    But open water/ice mix extent of sea ice is rather of disastrous quality,  ready to vanish in a few days.  The  thinning of most of a good chunk CAB can be seen on July 21,  with the best most strongest ice heading towards the melting block.    Brings into question whether sea ice extent numbers really tells the pictures as above,  thanks to NASA we understand reality better.

2016 Melt season is only similar to 2013 due to the persistent cyclones hugging open water areas.  The holistic icescape look is completely different,  and so is the weather, especially  temperature and circulation,  with often 2016 North Pole Highs and the occasional mini dipoles in the 2007 locations.   This scattering of sea ice will lead to massive melt extent numbers,  because the 15% of grid content will drop to 0.     WD  July 22,2016
Posted by EH2R at 1:44 AM