~Especially away from the Cold Temperature North Pole

It took a while ,  more  extensive cloud cover slowed data acquisition, but today help  gathered more than 50 sun disk measurements having a remarkable 20% result of vertical sun disks being above all time highest decimal averages.  5% is considered normal random result,  indicating no warming or cooling of the atmosphere.  20% is 4 times above normal.  Not seen like this since 2010 and 2016.   Turns out there is a warming,  particularly over the Arctic Ocean, not coming as a surprise given the thinner sea ice:

Indeed , all time high temps coincide with increasing clouds and the perpetuation of North Atlantic and Pacific moisture well above the Arctic circle,  this evenings CMC 700 mb  chart shows where the heat was found to be,  not only today but for about the last 2 weeks. 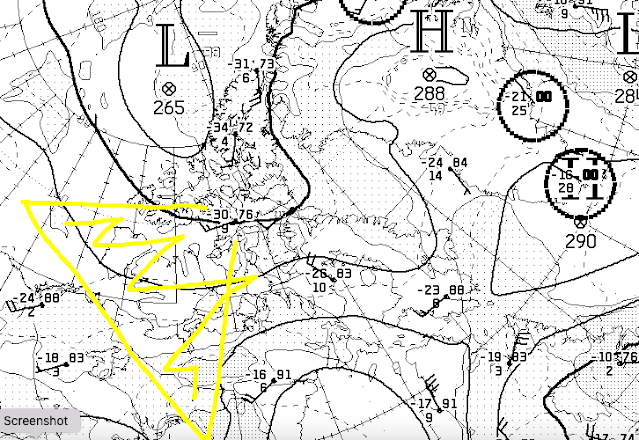 In yellow is the area where sun disks were measured.  There was a significant CTNP off West central Greenland a few days ago,  now the CTNP hovers above Ellesmere Island.   The CTNP was much further South preceding West Greenland,  it had no staying power because of proximity to the North Atlantic,   CTNP migrated from Northern Quebec to West Greenland and finally central Ellesmere in about 8  days., all while flowing air from the Arctic Ocean basin southwards West of 90W degrees longitude.  In the not so distant past,  this would have meant a significant deep freeze in the same area in yellow.  Vertical sun disks are far more sensitive to the temperature of the entire atmosphere, than at any particular altitude.  At recent vernal equinoxes particularly 2018, 2019  and 20,  the CTNP was situated above the central Canadian Arctic Archipelago,  strongly shrinking vertical sun disks,  2022 equinox scene is different, more like 2017 and preceding years,  when sun disks were much expanded and representing the whole Arctic.  Measuring sun disks from center of CTNP gave a peculiar distorted view representing a stable center of extreme cold clear sky weather which was unique compared to past 17 years.  Colder air, albeit smaller in extent,  can subsist even when warming is almost overwhelming at every locations.
WD March 21 2022