The ease by which sea ice pack veers or backs,  clockwise or counterclockwise by pressure system winds is a sure sign of thinness,  always intermixed with older sea ice,  but over all lesser weight of the entire pack means less momentum keeping one direction longer:

Not long ago,  the pack turned the other way,  July 31 to August 7 JAXA loop demonstrates the presence of a steady anticyclone over the Arctic Ocean.  During the earlier switchover,  sea ice daily melts slowed down,  or appeared so,  because of scattering rather than a temperature effect.

Laptev sea was open early,  had plenty of time to pick up solar rays,  the result is rapid 7 day sea lost easily identifiable by bountiful Goodbye Waves,  these are done by sea ice just about to disappear as water.   Here 44.5 nautical miles melted in 7 days direction North,  August 1 to 7.   A speed of 6.4 nautical miles a day. 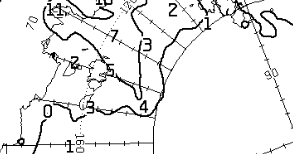 Also pushed North is this Laptev warm sst's very next to CMC 50% pack extents.  There is no melting slowdown possible when so.  WD August 7 2018
Posted by EH2R at 11:20 PM