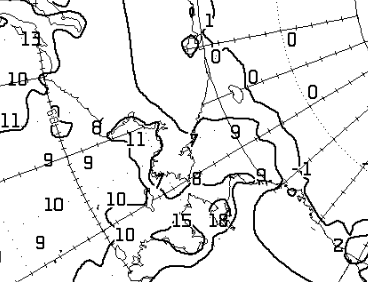 CMC reporting whopping +9 C sea surface temperatures in the Bering sea can only mean one thing:

We note super fast melting conditions North of Bering sea,  with ripe conditions enhanced by a High pressure Gyre favouring compaction and flow of  extreme warm waters finishing off straggling sea ice pans.  On the Atlantic Front,  we see Fram Strait loosing sea ice rapidly due to no flow conditions, but also a race towards a 85N on the entire Atlantic sea ice shore line.  The NE passage is about to open first, equally as expected in April,  the NW passage is clogged with sea ice but should open partially much later.

What about the black spots appearing in waves on the JAXA animation above?  They are open water zones opening closing rapidly as captured 82 N 176 W:

The JAXA dark spots indicate rapid movement of sea ice sometimes leaving open water gaps which may fill with rubble and slush,  is part of the same process detected North of Alaska about a month ago.  Rapid motion of sea ice may be interpreted as steady sea ice albedo until the slush turns to goodbye waves,  when the entire pack collapses rapidly as occurring North of Alaska at present.  WD July 30 2018