First,  winter Arctic High pressures are very cold, they exist over very dry  land or icescapes.  Polar High pressures of summer are warm,  they exist over dry surfaces,  consider a mid July wide open 0 to +4 C sea surface temperature as "dry".    Arctic Low pressures of winter are warm, they usually come from the South and consist of moist very cloudy turbulent air.    Arctic Low pressures of summer are cold,  they can come from the North and readily survive and last longer over a mix of open water and broken up sea ice.  Frozen surfaces are a great contributor to Arctic fog clouds when summer temperatures are near 0 C.  Basic meteorology holds these preceding generalizations consistent for the True North,  not necessarily nearer to the equator. 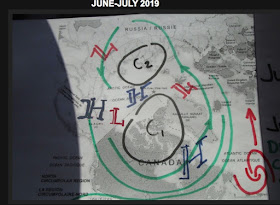 This was EH2r's April 2019 projection for June -July, the main circulation overview held quite well.   C1 and C2 are vortices within the Polar Vortex,  the coldest air exists at their respective centers.   Low pressure cyclones location flipped geographically from the a month prior,  from SE to NW of both vortices.  In summer,  coldest air usually hangs out between Greenland and Alaska, partly by the barriers offered by each of these massive topographies,  shading the potential warming influence from the Atlantic and Pacific.    Summer "Switchover" is when the repositioned  Low combats the very existence of the Arctic Ocean gyre,  a clockwise current now faces counterclockwise headwinds (North of Beaufort Sea), the clockwise gyre was  created by months of persistent winter High Pressure hovering (because cold anticyclones thrive during the long cloudier free nights).   Frequently of late,  the summer Low pressure hovering top of the Arctic gyre area can greatly diminish the transpolar current from Siberia to Greenland,  if it lasts long it may even slow, stop or reverse its direction altogether.  These Lows also provides warm advection from the Canadian continent to top of Greenland.   It is here where on the one hand the Gyre summer Low saves the Arctic Basin sea ice but literally helps melt the top of Greenland: 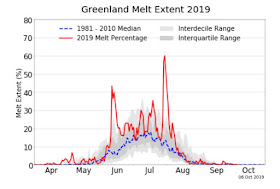 Each respective significant extent melt spikes had one strong thing in common,  the switchover Gyre Low: 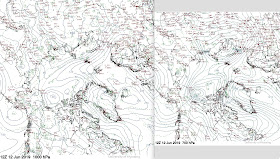 From University of Wyoming archives ,  there was a significant Gyre Low pressure North of sea of Beaufort,  during the first large melt over the Greenland ice sheet in 2019,  but on the other side of the Vortex,  the Eastern side ,  there was a High Pressure.  This image is exactly flipped during winter.  Relatively colder weather naturally languishes between Greenland and Alaska year round,  only the pressure configurations change.  It is said,
the Canadian side of the Arctic is usually more humid compared to the Russian side, largely because it is often colder by persistent presence of sea ice spared from direct melting by the influence of massive  Ellesmere Island and Greenland Glaciers.  Now look at 700 mb temperatures on top of Greenland compared to over the Gyre,  near 0 C compared to -15 C,  it was warmer over the massive Greenland ice sheet than above the Arctic Ocean at the same altitudes.  It is unquestionably colder within an Arctic summer Cyclone when top of Greenland melts a lot.  Here the North Atlantic High pressure mixed with a hot continental Canadian atmosphere expanded the number of small to modest in size glacial lakes on top of the Northern Hemispheres largest glacier.

We seek a consistent pattern confirmation that can only happen during the largest Greenlandic melt extent day of 2019 on about August 2: 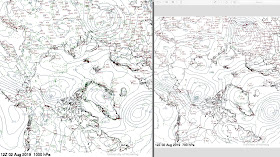 Again the atmosphere over the Arctic Ocean  Gyre current is colder by -10  to 0 C during the greatest top of Greenland melting day of 2019.   This largely confirms that the two differing ice sheets do not necessarily melt more in tandem,   but rather require different weather patterns than usually found during mid Arctic summers.  A steady long living cyclone over the Gyre current naturally slows the transpolar Arctic Ocean current which means a significant saving of sea ice volume otherwise to be surely lost to the  very much warmer summer time North Atlantic.

The only way for summer sea ice to melt entirely would require a rather stupendous change in nature from Greenland's cooling effect.  It is likely possible with a rather huge summer ice lake covering a significant portion top of Greenland,  much nullifying its cooling effect over the Archipelago  region,  then the coldest place in July Arctic would likely be where clouds dominate,  not necessarily above Arctic Ocean gyre current,  the coldest place would vary in locations more often allowing an anticyclone to persist longer over the gyre area,  when so,  the devastation of sea ice should be nearly complete.   WD November 6,2019